NASHVILLE, Tennessee —Will Stewart, the Tennessee Democratic Party employee who was captured on an undercover Project Veritas video shot at the Bredesen for Senate campaign offices in Nashville’s West End saying that Democrat Senate nominee Phil Bredesen lied when he said he would have voted “yes” to confirm Judge Brett Kavanaugh to the Supreme Court, is still working in a position of authority at that Bredesen for Senate campaign office.

Stewart was identified by Project Veritas in the undercover video as a “field organizer, Phil Bredesen campaign.” 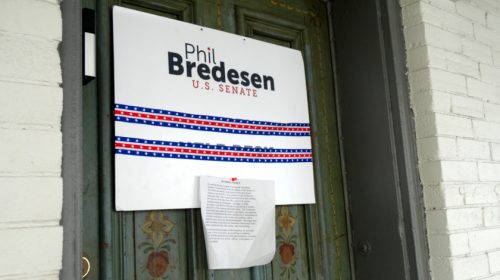 Stewart admitted he was one of the people who appeared on the Project Veritas video. He, however, had nothing else to say.

“I’ve been instructed to give a ‘No comment’ to any and all questions,” Stewart told The Star.

The Star did not see the other campaign staff members featured in the video, identified as field organizer Maria Amalla, and James Miller, whose role was listed as “voter protection.”

Publicly available records from the Federal Election Commission indicate that all three Bredesen campaign workers featured on the Project Veritas video–Stewart, Miller, and Amalla–are paid staffers of the Tennessee Democratic Party, and are not “volunteers” or “unpaid interns.”

Bredesen’s communications staff did not respond to an email with written questions Thursday.

Specifically, The Star wanted to know if Stewart and the others caught on video were, in fact, stating the unofficial inside position of the campaign.

Though the Bredesen campaign was silent on the devastating comments made by Bredesen campaign workers about Gov. Bredesen’s lack of truthfulness in the Project Veritas video, Mark Brown, the spokesperson for Tennessee Victory 2018, a project of the Tennessee Democratic Party, did offer a comment on the undercover video.

Brown is the same person who publicly tweeted “F*** ‘reaching out’ to Trump supporters,” as The Tennessee Star reported:

Republicans are raising a ruckus over a spokesman for the Tennessee Democratic Party’s use of foul language and name-calling, especially since that spokesman has been vigorously promoting the candidacy of Democrat Phil Bredesen for the U.S. Senate, who has expressed outrage at being called a “liberal.”

The former governor, who is running in the U.S. Senate race against Rep. Marsh Blackburn (R-TN-07), said last week it was “name-calling” when Vice President Mike Pence said he is a “liberal.”

However, Tennessee Republicans say Bredesen is deaf when it comes to the many imprecations uttered by state Democratic communications official Mark Brown, the Washington Free Beacon said.

Brown, who has been promoting Bredesen’s campaign in his role as a spokesman for the Tennessee Democratic Party, in the past has tweeted “f*** ‘reaching out’ to Trump voters. The idiots aren’t listening.”

The Tennessee Star reached out to the Bredesen campaign to ask if the former governor disavowed the Tennessee Democratic Party spokesman Mark Brown, or his foul-mouthed comments about the 1.5 million Trump voters in Tennessee.

The Bredesen campaign did not respond.

On Thursday, Brown made this statement about the comments of the Bredesen campaign workers captured in the Project Veritas video, as NewsChannel 5 reported:

Officials with Tennessee Victory 2018, a Democratic-run organization working with candidates state-wide, say the people seen in the video have never worked for Bredesen and have no working knowledge of his campaign’s tactics or strategies.

“These were just interns, they were volunteers,” says Mark Brown with TN Victory 2018. . .

When asked further about the video, Mark Brown said, “This fake volunteer used secret video recording equipment to capture uninformed and speculative.” He added that the party was considering legal action against Project Veritas.

Brown’s claims that “the people seen in the video. . .were just interns, they were volunteers” is belied by the Federal Election Commission records obtained by The Tennessee Star which show that all three of the individuals featured in the Project Veritas video–Will Stewart, James Miller, and Maria Amalla–are paid staffers employed by the Tennessee Democratic Party.

On the now viral video, Stewart said, among other things, Bredesen, if already a U.S. senator, would not vote to confirm Brett Kavanaugh as a U.S. Supreme Court justice. 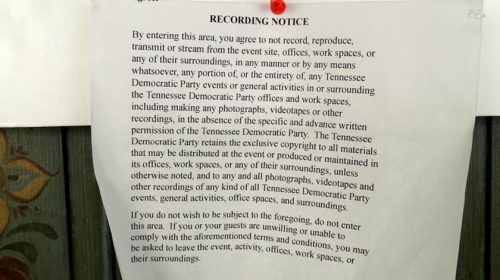 Bredesen did not take a position during much of Kavanaugh’s controversial and well-publicized confirmation hearings.

On Friday, October 5, one day before the Senate confirmed Kavanaugh in a 50 to 48 vote, Bredesen finally issued a tepid statement announcing he would be a “yes” vote for confirmation if in the Senate — but only after political experts said the confirmation was a done deal.

On Thursday, the front door of the campaign headquarters had a thumb tack attached to it holding up a printout with a warning for visitors. The warning instructed people not to record, reproduce, transmit, stream, or photograph anything or anyone inside — not without the express written consent of the Tennessee Democratic Party.

What was unclear was whether that printout was on the door before members of Project Veritas released their videos Wednesday evening.

On those videos, Amalla said Bredesen’s sudden support for Kavanaugh was nothing but “a political move” to get more Republicans on his side.

The Senate confirmed Kavanaugh to the Supreme Court the following day, Saturday, by a 50 to 48 vote, with only one Democrat, Sen. Joe Manchin (D-WV) casting a “yes” vote to confirm.

The videos captured Miller calling Bredesen “a good Democrat” who would “do the right thing” for the party during his potential six-year term.

Stewart, meanwhile, told the undercover Project Veritas journalist not to talk about any “Blue Waves” outside the office and that running against President Donald Trump is “why we’re all here.”

You can watch the Project Veritas video in which Stewart, Miller, and Amalla contradicted Bredesen’s public statements here:

The transcript of Stewart’s comments in the video can be seen below:

Journalist: I was so confused because I just can’t believe that he would actually vote yes [to confirm Kavanaugh].

Will Stewart: He wouldn’t. But he’s saying he would.

Stewart: Which, I don’t know if it makes it worse or better. No, it makes it better, but it’s still

Journalist: But, still, I don’t understand what’s to gain by saying yes.

Stewart: In their defense, at the doors yesterday there were people who said they’re voting for him.

Journalist: Because he said.

Stewart: Not many, but

Journalist: That’s why I wish Phil would just say . . .

Journalist: Me and Maria talked a little bit about it yesterday and it’s like I get it, but I don’t get it.

Journalist: So, he’ll lose voters if he says yes [to not confirming Kavanaugh]?

Journalist: Are the people of Tennessee that ignorant?

Journalist: Are they that dumb to want to put somebody like that in power?

Journalist: But I also know like I’ld like to think in my little heart that he’s not a super fan of Trump, but . . .

Stewart: Between you and me, once Phil actually gets into the Senate, he’ll be a good Democrat. But, yeah

Stewart: And it’s also just the start of something big, you know?

Stewart: Yeah. Yeah. We don’t say that oust of these walls. But here, of course, we talk about that. Cause it’s so funny. The message is, like, don’t talk about the blue wave.

We’re not running against Trump. All this sort of stuff. Even though that’s all why we are all here. We can’t put it out there.

Journalist: I can’t help but think that Phil is the same way though.

He’s not going to be running for re-election. He can get in there and do the right thing.

Bredesen staffer: Did you hear about that?

Staffer: Yeah, you can’t say that too often here.

Journalist: I don’t understand why, though?

Stewart: We’re allowed to say it, but it’s off message

Staffer: Yeah, the others?

Stewart: Like, campaign-wide, it’s not our message. You can say it in here, but like on those calls and stuff, that’s not a message we want to be sending. Because we’re not running…

Drew: We would scare all the people who would vote for Phil Bredesen but not Chuck Schumer

Stewart: Yeah, exactly, because there’s a lot of people who are Republicans who are going to vote for him, but . . .

Journalist: So if they know he’s like… I don’t want to say that he’s aligned with Chuck Schumer, but the would be like he’s in cahoots.

Stewart: Yeah, and that’s how they’re messaging against us.