NASHVILLE, Tennessee — Members of the Nashville Fraternal Order of the Police said Tuesday they have serious constitutional concerns about the proposed Amendment One.

If voters approve it next month then city officials would create a community oversight board over the police.

Former FOP President Robert Weaver spoke for the organization at a press conference at the Nashville Metro Courthouse late Tuesday.

“There are several aspects of this legislation that are constitutionally questionable. There are issues we have (with this proposed amendment) that don’t address due process,” Weaver said.

Weaver said this plan, if enacted, will waste $10 million taxpayer dollars. He called the proposed board “redundant” because there are other means for redress against the police already available in Nashville.

“Amendment One as written is biased against police officers.

It presumes a level of malfeasance that is simply not there for the officers of the metro police department.”

Weaver went on to say police already hold themselves to high professional standards and accountability. 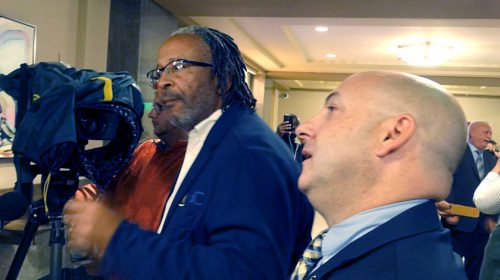 “Make sure you get the optics here,” Tucker told the assembled reporters while pointing to members of the FOP.

“You’ve got a bunch of old white men who are talking. It is so strange that this becomes an issue for accountability.”

Tucker said Amendment One is not anti-police — and then he accused the FOP of not allowing black members, something Weaver adamantly denied.

“This is not a race issue,” Weaver said.

As The Tennessean reported, Nashville Mayor David Briley has a problem with the language in the ballot.

“Briley has cautioned that ‘budgeting by charter amendment’ would set a bad precedent. The referendum proposal would cost $1.5 million annually. He’s also said the current plan does not have buy-in from the Metro Nashville Police Department,” according to the paper.

Briley, the paper went on to say, also believes “electing representatives at the council runs the risk of politicizing a board where keeping politics out of decision making will be critical.”

As The Tennessee Star reported, if Nashville voters say yes then, long-term, many officers will feel less valued and they will resign, said Metro Nashville Council member Steve Glover.

As reported, this proposed oversight board, assuming the referendum passes, would have 11 members. Seven of those members would come from any part of Davidson County. The remaining four would come from Nashville’s economically distressed communities.

Metro Nashville Council members get to decide who serves.

11 Thoughts to “Nashville Fraternal Order of Police: Proposed Amendment One Not Constitutional”