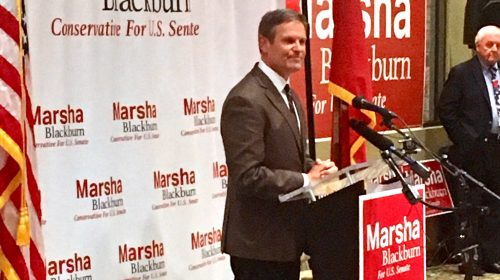 After being introduced by State Senator Jack Johnson, Lee mentioned that a young man earlier in the day had told him that he “just cast his vote” to elect him Governor. “It really struck me,” Lee said, “that the young man and thousands just like him are pushing a button next to my name and entrusting me with their future and the future of our state. I don’t want to let him down. I don’t want to let down the kids in the inner city that I have worked with or in the farming communities where I have spent time. I recognize the responsibility that they are placing on me and I will do my very best to show that that trust in me is deserved.”

Lee went on to point out that Blackburn has been his Congressman as the has served Williamson County and the rest of her district and that he knows she will continue the great work she has done as the next U.S. Senator from Tennessee. 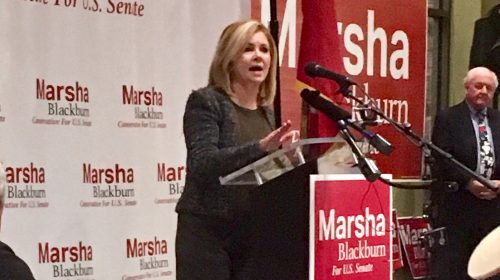 Blackburn noted that she is excited that Bill Lee will soon become Governor of Tennessee, and that the progress our state has seen will definitely continue under his leadership. Blackburn also emphasized the fact that this election is critical and that voters need to get to the polls in order to provide President Donald Trump with the support he needs to continue to revitalize our economy, secure our border and strengthen our country.

“If Phil Bredesen is elected to the Senate he will put Chuck Schumer in charge of the Senate; and Diane Feinstein as Chairman of the Judiciary Committee, and Elizabeth Warren as Chair of Financial Services. They will not represent OUR values,” Blackburn said. “And they will eliminate the Trump tax cuts that have helped our economy recover and put more money back in our pockets; cuts that Phil Bredesen has called ‘crumbs’,” Blackburn added.