Throughout grade school and high school, I was fortunate to participate in quality music programs. Our high school had a top Illinois state jazz band; I also participated in symphonic band, which gave me a greater appreciation for classical music. It wasn’t enough to just read music. You would need to sight read, meaning you are given a difficult composition to play cold, without any prior practice. Sight reading would quickly reveal how fine-tuned playing “chops” really were. In college, I continued in a jazz band and also took a music theory class. The experience gave me the ability to visualize music (If you play by ear only, you will never have that same depth of understanding music construct.)

Both jazz and classical art forms require not only music literacy, but for the musician to be at the top of their game in technical proficiency, tonal quality, and creativity in the case of the jazz idiom. Jazz masters like John Coltrane would practice six to nine hours a day, often cutting his practice only because his inner lower lip would be bleeding from the friction caused by his mouthpiece against his gums and teeth. His ability to compose and create new styles and directions for jazz was legendary. With a few exceptions such as Wes Montgomery or Chet Baker, if you couldn’t read music, you couldn’t play jazz. In the case of classical music, if you can’t read music you can’t play in an orchestra or symphonic band. Over the last 20 years, musical foundations like reading and composing music are disappearing with the percentage of people that can read music notation proficiently down to 11 percent, according to some surveys. 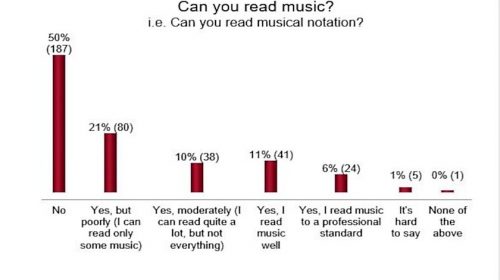 Two primary sources for learning to read music are school programs and at home piano lessons. Public school music programs have been in decline since the 1980’s, often with school administrations blaming budget cuts or needing to spend money on competing for extracurricular programs. Prior to the 1980’s, it was common for homes to have a piano with children taking piano lessons. Even home architecture incorporated what was referred to as a “piano window” in the living room which was positioned above an upright piano to help illuminate the music. Stores dedicated to selling pianos are dwindling across the country as fewer people take up the instrument. In 1909, piano sales were at their peak when more than 364,500 were sold, but sales have plunged to between 30,000 and 40,000 annually in the US. Demand for youth sports competes with music studies, but also, fewer parents are requiring youngsters to take lessons as part of their upbringing.

Besides the decline of music literacy and participation, there has also been a decline in the quality of music which has been proven scientifically by Joan Serra, a postdoctoral scholar at the Artificial Intelligence Research Institute of the Spanish National Research Council in Barcelona. Joan and his colleagues looked at 500,000 pieces of music between 1955-2010, running songs through a complex set of algorithms examining three aspects of those songs:

2. Pitch- harmonic content of the piece, including its chords, melody, and tonal arrangements

The results of the study revealed that timbral variety went down over time, meaning songs are becoming more homogeneous. Translation: most pop music now sounds the same. Timbral quality peaked in the 60’s and has since dropped steadily with less diversity of instruments and recording techniques. Today’s pop music is largely the same with a combination of keyboard, drum machine and computer software greatly diminishing the creativity and originality. Pitch has also decreased, with the number of chords and different melodies declining. Pitch content has also decreased, with the number of chords and different melodies declining as musicians today are less adventurous in moving from one chord or note to another, opting for well-trod paths by their predecessors. Loudness was found to have increased by about one decibel every eight years. Music loudness has been manipulated by the use of compression. Compression boosts the volume of the quietest parts of the song so they match the loudest parts, reducing dynamic range. With everything now loud, it gives music a muddled sound, as everything has less punch and vibrancy due to compression.

In an interview, Billy Joel was asked what has made him a standout. He responded his ability to read and compose music made him unique in the music industry, which as he explained, was troubling for the industry when being musically literate makes you stand out. An astonishing amount of today’s popular music is written by two people: Lukasz Gottwald of the United States and Max Martin from Sweden, who are both responsible for dozens of songs in the top 100 charts. You can credit Max and Dr. Luke for most the hits of these stars:

With only two people writing much of what we hear, is it any wonder music sounds the same, using the same hooks, riffs and electric drum effects?

Lyric Intelligence was also studied by Joan Serra over the last 10 years using several metrics such as “Flesch Kincaid Readability Index,” which reflects how difficult a piece of text is to understand and the quality of the writing. Results showed lyric intelligence has dropped by a full grade with lyrics getting shorter, tend to repeat the same words more often. Artists that write the entirety of their own songs are very rare today. When artists like Taylor Swift claim they write their own music, it is partially true, insofar as she writes her own lyrics about her latest boyfriend breakup, but she cannot read music and lacks the ability to compose what she plays. (Don’t attack me Tay-Tay Fans!)

Music electronics are another aspect of musical decline as the many untalented people we hear on the radio can’t live without autotune. Autotune artificially stretches or slurs sound in order to get it closer to center pitch. Many of today’s pop musicians and rappers could not survive without autotune, which has become a sort of musical training wheels. But unlike a five-year-old riding a bike, they never take the training wheels off to mature into a better musician. Dare I even bring up the subject of U2s guitarist “The Edge” who has popularized rhythmic digital delays synchronized to the tempo of the music? You could easily argue he’s more an accomplished sound engineer than a talented guitarist.

Today’s music is designed to sell, not inspire. Today’s artist is often more concerned with producing something familiar to the mass audience, increasing the likelihood of commercial success (this is encouraged by music industry execs, who are notoriously risk-averse).

In the mid-1970’s, most American high schools had a choir, orchestra, symphonic band, jazz band, and music appreciation classes. Many of today’s schools limit you to a music appreciation class because it is the cheapest option. D.A. Russell wrote in the Huffington Post in an article titled, “Cancelling High School Elective, Arts and Music—So Many Reasons—So Many Lies” that music, arts, and electives teachers have to face the constant threat of eliminating their courses entirely. The worst part is knowing that cancellation is almost always based on two deliberate falsehoods peddled by school administrators: 1) Cancellation is a funding issue (the big lie); 2) music and the arts are too expensive (the little lie).

The truth: Elective class periods have been usurped by standardized test prep. Administrators focus primarily on protecting their positions and the school’s status by concentrating curricula on passing the tests, rather than by helping teachers be freed up from micromanaging mandates so those same teachers can teach again in their classrooms, making test prep classes unnecessary.

What can be done? First, musical literacy should be taught in our nation’s school systems. In addition, parents should encourage their children to play an instrument because it has been proven to help in brain synapse connections, learning discipline, work ethic, and working within a team. While contact sports like football are proven brain damagers, music participation is a brain enhancer.

Jon Henschen is president of Henschen & Associates, a Twin Cities-based firm that matches financial advisors to independent broker-dealers.  He has more than 25 years of experience in the financial services industry and has worked as a registered financial advisor in both the independent and wirehouse channels.  Jon has been featured in numerous financial publications, including the Wall Street Journal, Bloomberg News, Reuters, and the New York Post.