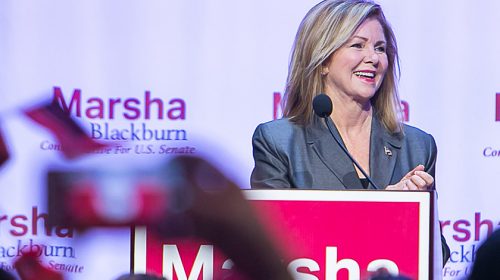 “They played dirty. They lost,” Graham said at a press conference that followed a Marsha Blackburn for U.S. Senate rally at Ray Stevens CabaRay Showroom.

“Because of what they did, I really want them to pay a price at the ballot box.”

Graham said the adversarial nature of Kavanaugh’s U.S. Supreme Court confirmation hearings so appalled him he decided to take up for Republican U.S. Senate candidates whenever and wherever he’s welcome.

Blackburn is running as a Republican against former Gov. Phil Bredesen, a Democrat.

Some of Bredesen’s supporters showed up — and, for their behavior got dragged out while cussing, screaming, punching, and even kicking.

This, of course, mirrored much of how leftists behaved during Kavanaugh’s confirmation hearings.

One protester even disrupted a moment of silence for victims of Saturday’s mass shooting in Pittsburgh.

That protester, a female, screamed “Marsha Blackburn is a white supremacist.”

Security promptly showed her the door.

“How despicable that you cannot even have a moment of silence to remember those who lost their lives?” Blackburn asked the crowd.

One protester, a male, appeared on video to struggle with law enforcement as security escorted him out the door. Former Fisk University student Justin Jones, who told The Tennessean in May he was scheduled to attend Vanderbilt Divinity School this fall, admitted on his personal Facebook page he was the man in the video.

Yet another protester, an unidentified female, lifted her legs in the air and kicked and screamed as several men picked her up and carried her out.

You can watch the video of the protester who interrupted the moment of silence here:

Graham seemed to have the protesters on his mind as he spoke after all the commotion.

“I’m a conservative, and I’m happy about it,” Graham said.

“Apparently, if you are a liberal you are not a very happy person.”

Graham warned the audience Democrats at the national level invested $12 million in the Tennessee U.S. Senate race. He also said they wouldn’t invest that much money unless they knew exactly what they were getting in return.

“As to the Democratic nominee in this state (Bredesen), you can say anything you want, but we know exactly what you are going to do,” Graham said.

“I want Chuck Schumer to know he wasted his money. And I want every Democrat to know that If you go down the road of the mob then this is your fate.”

Graham said he was “tired of seeing conservatives run over” and was disappointed in how the mainstream media covered the Kavanaugh hearings. That, he went to say, is why he stood up for Kavanaugh the way that he did during the hearings and why he now campaigns for Blackburn.

“I did what people in South Carolina and conservatives expected of me,” Graham said. 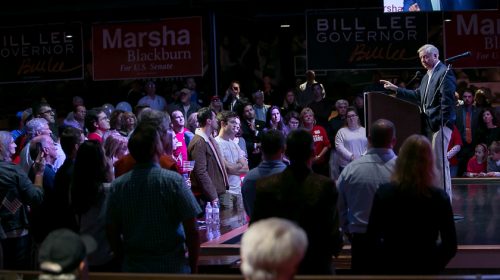 “If I spoke for you then I am very pleased and proud. There’s only one way to fix this problem. Beat them (Democrats) at the ballot box.”

At a press conference afterward, Graham told The Tennessee Star the rule of law matters more to him than friendships with other senators.

“The one thing I want people to know about me is this. I’ll work with you. I will do my fair share crossing party lines, but I will not be disrespected,” Graham said.

“And I thought what they did was disrespectful to the process in the Senate.”

A few hours after the event, Blackburn put out a press release condemning the protesters.

“This Sunday afternoon, the liberal angry mob made it clear they are active in Tennessee and will stop at nothing to disrupt civil political discourse,” according to the press release.

“I’m grateful to the law enforcement officers who were here today and kept everyone safe. The protestors at today’s event were absolutely appalling.”

Bredesen, the release went on to say, “is their leader, and their behavior is despicable.” 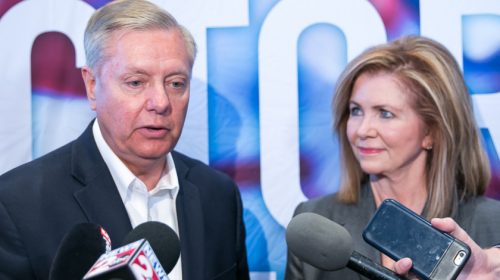 Tennessee Star Political Editor Steve Gill, meanwhile, pointed out there is a difference in peaceful protest and the sort of unhinged behavior demonstrated at the Blackburn event.

“Shouldn’t these deranged people be taken into custody by police for a mental health evaluation to determine whether they might pose a threat to themselves or others?” Gill asked.

“Particularly in view of recent events and when they show this sort of unbalanced behavior that verges on violence. These clearly unstable people are showing signs of mental health problems that seem much more aggravated than those who later gravitated to shootings and making bombs.”