The two men posed for a photo together, and Jones, 23, proudly uploaded it to his Facebook.

And this apparently wasn’t a quick meeting, as the two men conveniently sat next to one another on an airplane trip. 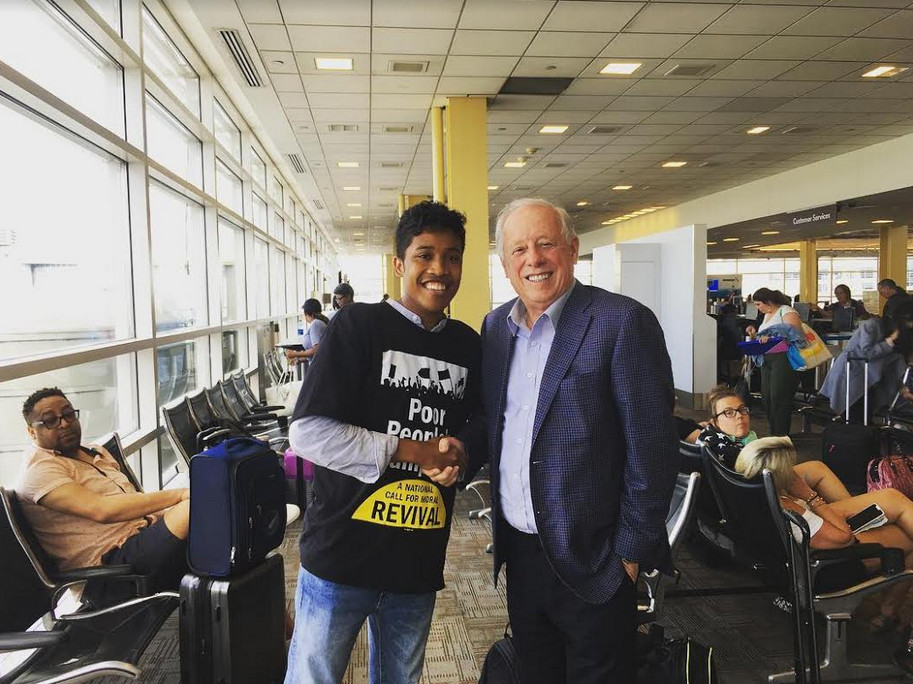 “Ran into former Tennessee Governor, Phil Bredesen, at the DC airport yesterday. Talked about the #poorpeoplescampaign and coincidentally we ended up sitting next to each other on the plane,” Jones said in the post, dated June 24.

“Now that he’s running for U.S. Senator Bob Corker’s seat against Rep. Marsha Blackburn, we need commitments that he will fight for everyday people if elected and lift up a policy agenda that challenges systemic poverty, systemic racism, the war economy, ecological devastation, and the nation’s distorted moral narrative. We already know Marsha ain’t right, but whoever is elected let’s hold folks accountable!”

Law enforcement officers, as The Tennessee Star reported, carried Jones out of the Ray Stevens’ CabaRay Showroom by force Sunday after he refused a direct order to leave an event featuring Blackburn and Republican South Carolina U.S. Sen. Lindsey Graham. Officers detained Jones in a squad car, and court officials refused to issue an arrest warrant for him on charges of resisting arrest, disorderly conduct, and criminal trespass, as police officers requested. Instead, the court officials let Jones off with a citation. The showroom, of course, is private property.

A woman by that same name chairs the National Black Action Committee, according to LinkedIn. That woman also interns for Tennessee Democratic gubernatorial candidate Karl Dean, her LinkedIn went on to say.

Meanwhile, Mark Brown, spokesperson for the Democratic Party’s Tennessee Victory 2018, somehow had access to the inside of the showroom on Sunday, before the Blackburn rally began. Someone inside the showroom took two photos from the far-right corner, where several people were already sitting, waiting to hear Blackburn and Graham.

Brown posted those photos on his Twitter page Sunday, although the exact time of day was unclear. One of the protestors, a female, who later interrupted the rally with an outburst of her own, sat in the exact same area as the mysterious photographer — again, in the showroom’s far-right corner.

Reportedly, Bredesen has no official ties to the protestors who disrupted the rally. Representatives from Bredesen’s campaign, Brown included, have reportedly said as much on social media and in interviews with various media outlets.

Jones said he did not talk to anyone at the Tennessee Democratic Party or the Bredesen campaign about attending Sunday’s event.

As for Jones, a glowing profile in The TN Ledger last year described him, then attending Fisk University, as the school’s “most politically active student,” who took state legislators to task over health care, voting rights, and police accountability.

The article reported Jones grew up in Oakland, Calif.

“He was offered an endowed scholarship to study social justice and activism after showing leadership potential by organizing events in the San Francisco area after the Trayvon Martin shooting,” the paper reported.

The Ledger also gave him credit for organizing marches and other political events in Tennessee.

“He has also participated in or organized dozens of events – mobilizing young people to vote, to fight barriers at the ballot box, testifying at the Tennessee Legislature, coordinating rallies and challenging the inability of students to use college photo IDs as identification to vote,” the paper wrote.

The Ledger even mentioned how he organized a group of protestors against former Republican State Sen. Mae Beavers over a bill she sponsored. That bill would have required public school students use the bathroom consistent with their gender listed on their birth certificate. The Star also reported what happened.

When asked Monday, Beavers told The Tennessee Star that Jones and other protestors showed up in her office and “started being very rude.”

“They knocked flowers off the desk and followed me to  my office screaming so loud behind my back that it literally hurt my ears,” Beavers said.

“They came back to my office for three Wednesdays in a row, where they would sit in my office or sit in the floor. Justin was the leader. You could tell. He would constantly knock on my door, calling for me to answer some questions. I couldn’t even carry on a conversation with the people I had appointments with.”

Beavers said that went on for three weeks.

“When I started looking into who is Justin Jones I looked at his Facebook page,” Beavers said.

“He had been at the pipeline protest out west. He was in Washington, D.C. for the women’s march. He, of course, had been in our offices, and then he had been, after that, at the protest over the Nathan Bedford Forrest bust in the state capitol. He was the one that put a black cloth over the bust.”

Beavers said she believes someone is paying him to protest, although she said she has no proof.

“It seems that he’s been across the country protesting,” Beavers said.

“It would take a lot for a student to go across the country protesting.”

Beavers said she believes Jones is “a professional leftist protestor.”