Nashville, TN — Stephanie Owens grew up in a musical family. Her dad was a high school choral director and her mom was a classical organist. She knew from a young age that performing was what she born to do.

“I had an old turkey-baster for a microphone and ran around the couch for my stage,” she said. When Stephanie was 19 years old  and attending Liberty University in Lynchburg, she gained experience in front of the camera and in the studio. She made her film debut when she was chosen to play the starring role of Faith Garrett in Finding Faith the movie, co-starring Erik Estrada. The movie was released nationally in 2014 on Netflix and at Wal-Mart and other retailers. The movie soundtrack includes Stephanie singing a featured song and a lullaby which she composed for the film. (Read more here.)

Even though she is a talented actress, she always knew she wanted to pursue the singing route more because “you can be more you as opposed to being a character.” Because there is definitely a spiritual element to her songs, I wondered why she chose to pursue country music as opposed to Christian music.

Stephanie stated that she grew up in church with Christian music. But then she recounted, “When I was eleven years old, a friend gave me a Martina McBride Greatest Hits Album. ‘Concrete Angel‘ and the rest of her songs rocked my world. I loved how she could be so real and raw and authentic with the lyrics and her voice, it captivated me. I like how you can be real and talk about problems and issues and then have these really crazy fun country songs.” She definitely wanted to be a part of that.

Stephanie Owens graduated college in three years so she could move to Nashville and pursue her dream. She worked for four months to save up money to move, and found an apartment and a job at Bricktops in Nashville. Working at the restaurant, she met songwriters and people in the music industry who helped guide her career. 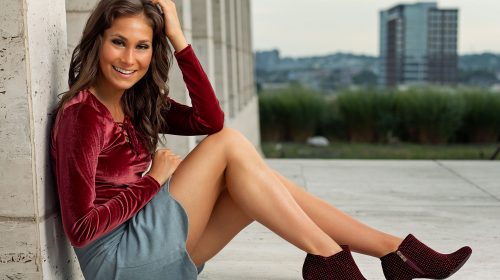 One of the first people she met was Bart Herbison at NSAI where he explained that songwriting was key. She learned that writing catchy tunes was not enough. She had to be intentional, by asserting, “What do I want to say to the world?” (Stephanie has written or co-written all the songs on her self-titled debut EP.) She felt like she had a responsibility to share about her eating disorder she had as a preteen/young teen by the writing of the song, “”Little Girl in the Mirror.”

She explains that since she grew up performing, it really got to her head. She relates, “people were saying, ‘She’s good, she’s great on stage,’ and I thought had to be perfect and look perfect. If I wanted to be a singer someday, they are all thin and they are beautiful, which is stupid because it’s not true. I wanted to control every area of my life and it escalated to over-exercising and an eating disorder.”

She was a Christian and prayed that she would get better as she was treated for anxiety and her need for perfection.

Stephanie was fortunate to have her debut EP created with Nashville Grammy-nominated producer, Brad Hill.

“I saw his name on Maren Morris’ stuff and in conjunction with busbee and with the Swon Brother,” she said. She messaged him on Instagram and, to her surprise, he got back to her. He took the time to get to know her and what she wanted to say, and helped her decide which songs to use on her EP.

When asked about the lack of women represented in country music, she acknowledged that “it’s frustrating,” but understands that “the music industry is a business.”

“So, if something is working, which are these ‘Bro-Country’ songs, they are going to keep doing it. But at the same time, there are so many talented women out there. My story (about body image), is a story that women need to hear because identity is a thing, regardless of who you are,” she said.

One of the driving forces behind elevating women in country is Leslie Fram at CMT who has been a help to artists like Stephanie Owens. “Girls need to hear what we are saying,” Owens said. 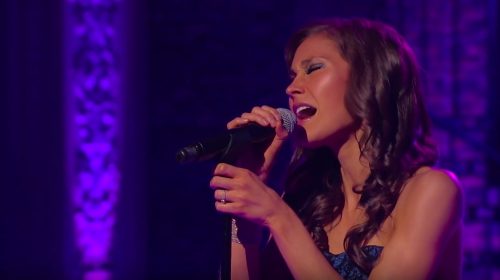 Most recently, Stephanie Owens was featured on TBN’s Huckabee. A person from her home church in Virginia was an executive producer for Huckabee. Her parents casually mentioned that she recently released new music and had a story she wanted to share. “It was a so surreal, it was crazy and a God-thing.”

You can watch Stephanie’s interview here, and see her performance on Huckabee here.

Just like Martina McBride’s hits, Stephanie’s range of songs on her Stephanie Owen EP go from the heart-wrenching “Girl in the Mirror” to the spiritual “Rest” and the nostalgic “Box of Letters,” not to mention the love song “Heart Taker” and finally the crazy, fun “Behind the Wheel.” These songs are well-rounded and they represent the things Stephanie is passionate about.

“I know I was given a gift and I was given a story and at the end of the day, it is my responsibility to use it however that plays out. I believe that every person has been given a unique story and gift that, when shared, can leave a legacy that echoes into eternity, so I can’t wait to start sharing songs that give a glimpse into my true story and what I’m passionate about,” she said. “I definitely want my music to be entertaining, but, more than anything, I want it to be an inspiration to those who hear it.”

Stephanie is committed to using her God-given talents to impact the world. She is currently sharing her story and songs to girls’ groups and school assemblies. To book her, email [email protected].