It will definitely set your mood if you have been a supporter of President Donald Trump and his efforts to control immigration and get that wall built.

Incumbent Republican Dave Brat (R-VA-07) is in a statistical dead heat in recent polls with political newcomer Democratic candidate Abigail Spanberger who said in a debate with the incumbent Brat that she wants “comprehensive, bipartisan immigration reform” which she knows is a coded endorsement for giving amnesty to millions here illegally.

Spanberger, a former CIA agent, went on to say she would “give certainty to dreamers” referring to the Obama executive order granting the right to stay in America to young people who came into the country illegally with their parents.

In that same debate in Culpeper on October 16th, Brat, the former chairman of the Economics Department at Randolph-Macon College, touted his two-term record in the House of Representatives as an immigration hawk who attempted to work with Democrats to begin reforming a dysfunctional US immigration system.

Citing Spanberger’s support for sanctuary cities, Brat said, “my opponent falls to the very far left on this issue of immigration.”

Indeed Rep. Brat is entitled to point to his immigration record in the House. NumbersUSA, an immigration watchdog group headquartered in Virginia, gives Brat an A+ on its Congressional scorecard and labels him a “true reformer.”

Numbers rates members of Congress on twelve key issues important to its one million members nationwide relating to legal and illegal immigration with a focus on the impact of immigration on American workers.

Spanberger apparently did not fill out a questionnaire that the organization makes available to candidates who do not have a voting record. 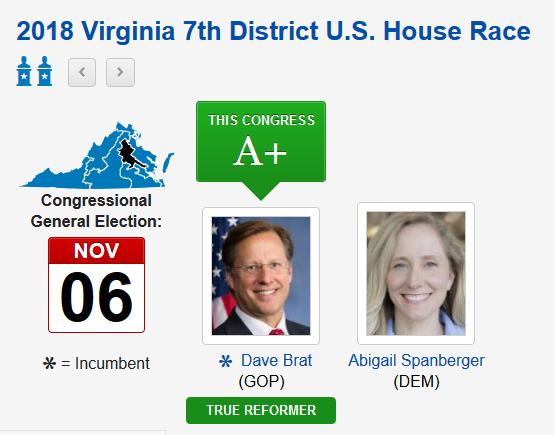 A poll released by NumbersUSA last month, and reported by The Ohio Star, shows that Virginians, by a wide margin, support reducing the number of legal and illegal migrants arriving across our borders every year.  The twenty year-old organization estimates that over a million legal immigrants alone enter the US every twelve months putting downward pressure on wages.

It is no surprise that candidate Spanberger is outspending the incumbent Brat (nearly $6 million to Brat’s $2.75 million) because Brat, as a strong supporter of President Donald Trump, has been a prime target of the Democrats.

But, some Republicans are out to unseat him as well.

Brat came to the nation’s attention in 2014 when he defeated Republican Eric Cantor in an upset primary race largely built by grassroots support for Brat’s strong stand on illegal immigration.

NumbersUSA gave him credit, even before he was sworn in, for turning the tide in Congress where the Senate had already passed a comprehensive immigration bill.  Brat’s primary defeat of House Majority Leader Cantor ended the ‘Gang of 8’ amnesty battle as that victory sent shock waves through the Republican establishment where Cantor enjoyed a leadership position.

This week, still smarting from their 2014 loss and demonstrating the disdain anti-Tea Party establishment Republicans have for Brat, former Republican Sen. John Warner endorsed Spanberger for the 7th District.

However, according to Bob Holsworth CBS6 political analyst, that is all in the past. He says the race is close because of a backlash against President Donald Trump in the Richmond suburbs. Brat has lived in Richmond since 1996.

Held by Republicans for fifty years, the Democrats are salivating for the district. We will find out early on Tuesday night if the President’s closing campaign strategy of focusing on the caravan, and immigration generally, plays out in Brat’s favor.

Polls close in Virginia at 7 p.m. making this race an early potential bellwether for the evening.

Anna Marie Bolton is a reporter for The Ohio Star.