Too many people in Brentwood leave their keys in their automobiles unattended and car thieves notice, said that city’s Police Chief Jeff Hughes.

As of the middle of October of this year, Brentwood Police tallied 21 vehicles stolen in 2018 compared to 18 stolen all last year, Hughes said.

“Hot wiring a car is almost impossible nowadays. This is happening because people are leaving their vehicles with their keys in their cars,” Hughes told The Tennessee Star. 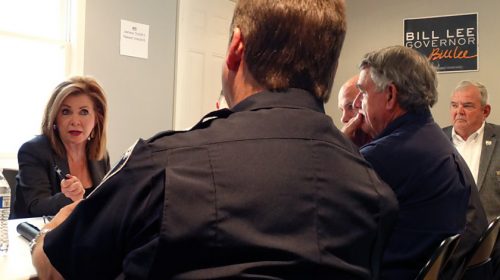 “I think people sometimes have a false sense of security in an area that is consistently ranked by certain sources to be one of the safest cities in America, if not Tennessee. They will become complacent and leave valuables in their cars, leave their vehicles unlocked and, if not their primary set of keys, they may leave a spare set of keys in the car.”

The thieves are usually juveniles coming in from Davidson County, some as young as 13 and 14-years old, Hughes said.

That’s why these crimes are more likely to happen in the northern parts of Brentwood, nearest to Davidson County, Hughes said.

This was among many topics Hughes and other area law enforcement officers addressed at a recent roundtable discussion in Franklin with Republican U.S. Senate candidate Marsha Blackburn.

“This is all gang related. We are working closely with the Metro Nashville Juvenile Gang Task Force,” Hughes told Blackburn and other law enforcement officials.

“If we were to arrest these people who came to Brentwood and stole a car they will just get let go. They are right back out on the street.”

Hughes told The Star there’s only so much he and his officers can do about suspects as they’re stealing cars. That’s because officers are bound by case law.

No one pursuit is the same, Hughes said.

“If it is a property crime you have to balance the potential for causing injury to someone as a result of pursuit as opposed to getting a tag number, identifying the suspect, and maybe apprehend him at a later time,” Hughes said.

“If they had committed a violent act or we thought they had a propensity for violence then if we did not pursue them they could harm someone if allowed to go free. Then we could probably justify pursuing those folks longer.”

The suspects usually abandon the cars once they reach Davidson County, Hughes said.

Hughes said officers have made a few arrests this year. He said he would like to share this information in a database of some sort with other law enforcement agencies.