On Monday’s Tennessee Star Report with Steve Gill and Michael Patrick Leahy – broadcast on Nashville’s Talk Radio 98.3 and 1510 WLAC weekdays from 5:00 am to 8:00 am – the team chatted with Tennessee’s own, Congresswoman, Marsha Blackburn about her current campaign, her values as a public servant, and what it’s like to be beside President Trump at these large enthusiastic rallys.

Blackburn:  It is good to be with you!  And yes it was so wonderful to be in Franklin on Saturday.  It was the Franklin family fun day.  And I’ll tell you what, my grandsons’ had a great time and I know your little granddaughter had a good time also.

Gill: It was a big day down there but an even bigger day in Chattanooga.  Now you’ve been to these Trump rally’s two years ago in 2016, you’ve been to several that have been here in Tennessee on your behalf.  I got to tell ya, they seem like they are more enthusiastic and bigger than we saw two years ago.

Blackburn: Yes they are. And here’s the reason, I think that they are bigger is because people are going, “Hey wait a minute, you Democrats are wanting to take away my tax cuts, you’re wanting to increase regulation, we are finally working, the economy is finally growing, we’ve got somebody who has started building the wall, we want to protect our nations sovereignty.” And we hear this story over and over and over again.  And people are just tired of having the federal government on their backs in their pocket book.  They’re finally seeing some changes and some growth in the economy.  And they see their opportunity to seek to their version, build their version of the American Dream. And I got to tell you, they will say repeatedly, ‘let’s make certain that we do not lose the gain that we have made’.  Our troops are funded, our veterans are being cared for, let’s not turn back now.  They are bigger, they are showing up. 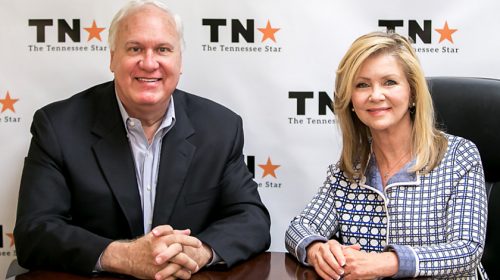 Gill went on to talk about Chuck Schumer’s connection to Phil Bredesen and Bredesen’s continuous denial of Schumer money and that he won’t support him in the Senate.  He discussed the new ad that Bredesen say he is against the mob of migrants, sent troops, and himself went to the border, and continues to portray himself as trying to “stop the hoard“.  He asked Blackburn if she believed that the immigration issue is moving the votes.

Blackburn: Oh it definitely is moving votes.  And what you’ve got is a clear indication that these are statements being made by somebody who is a desperate.  They know they’re losing this campaign.  And they know that I am winning.  And so now he’s going to say “Well, I did this and I did that.”  But here’s what Tennesseans know.  They know that he gave driving certificates to 51,000 illegal aliens when he was Governor.  They know he has said, that he does not think immigration is a top ten issue.  They know that he has said  he can’t figure out why people are so excited about this issue of the caravan, why they think it is such a problem.  They also know he has said he doesn’t see a few thousand poor people coming to the southern border as an issue.  We also know that if he were elected, his very first vote would be for Chuck Schumer.  Somebody does not invest fifty million dollars into your race for you to go to D.C. and then say and I’m going to vote against you.

Leahy: And Senator Tom Cotton by the way told us yesterday, Friday rather, that claim by Bredesen has zero credibility.  This is Michael Patrick Leahy, Congressman Blackburn. And by the way, we first met in 1998 when you were running for the state Senate again and you were the only person sitting at a table as I went to vote in Thompson Station and you spent about fifteen minutes talking with me and my daughters, so I had a great feeling about the kind of representative you would be. Here’s a personal question for you.  So, you’re there in this huge rally with the President of the United States last night in Chattanooga, and you’ve been working hard, and it’s a lot of work, and I don’t know if you get more than one or two hours of sleep a night.  But when you’re there, and the President is supporting you and the huge crowd is there rallying and cheering for you, do you just stop for a moment and savor it all?

Blackburn went on to express her gratefulness for her friends, family, her staff and volunteer and how much work they’ve put into her race and how she doesn’t want to disappoint anybody or let anyone down.  She disclosed that she has chose to become a public servant because she is concerned with preserving what she calls the Big Five: the rights for faith, family, freedom, hope and opportunity.  She mentioned her discussion with President after the rally that they needed to rebrand the GOP.  She told him that it needs to stand for Great Opportunity Party, not Grand Old Party.  She was convinced that this was something that needs to be done because our message is for the future generation and that we must to continue to get the government off our back and drain the swamp.  She stated one of her goals from day one is to become a “government of by and for the people”.

Gill: You know, you and I have been involved with this for a while, and putting aside the polls, putting aside the  kind of feel from the crowds.  You and I have seen this long enough to recognize, that you can look at candidates that in the last week, they either have that swagger, they either have that confidence, they’re striding into the arenas, or they’re kind of shuffling in.  You look at President Trump, man he looks like a guy, I don’t care what the polls are saying, he’s feeling it.  You show that enthusiasm and that confidence going into this final week that shows, you’ve got a candidate that’s on the right track.  As you’re looking at some of these races around the country, including your own, are you seeing that same thing?  That our candidate seem to have that little bit of swagger that you see in a winning campaign versus that little bit of panic that you see in a campaign that knows its losing despite what the polls may show.

Blackburn: Yeah, you know, here’s the thing.  The President and Vice President and I talked a little bit about this last night too Steve. You’ve got a lot of people that have stopped voting and came back to the ballot box in 2016.  These people, and a lot of them will come up to me saying, I’m out campaigning and identify themselves as a Trump Democrat. And these are people who are supporting me, voting for me, they are out volunteering and campaigning and talking to their friends and neighbors.  They are helping us win this election.  And they’re vitally important to us.

The discussion concluded by reflecting upon those Democrats and Republicans that haven’t been showing up at the ballot box and haven’t been engaged or involved and how they could potentially carry the day for Republicans.  Blackburn concurred by stating that whether it was vitally important that the Trump Democrats must come back out, after seeing the elitism and cronyism which they didn’t like in Washington, yet have seen promises that were made and have been kept and change being delivered.  She was convinced that what we are seeing is a whole new day.

Tune in weekdays from 5:00 – 8:00 am to the Tennessee Star Report with Steve Gill and Michael Patrick Leahy on Talk Radio 98.3 FM WLAC 1510. Listen online at iHeart Radio.