Leftist groups organized protests in hundreds of cities across the nation, including Tennessee, Thursday to protest the appointment of Acting Attorney General Matthew Whitaker, citing fears he might interfere with special counsel Robert Mueller’s Russia probe. Many protests used similar words and slogans. 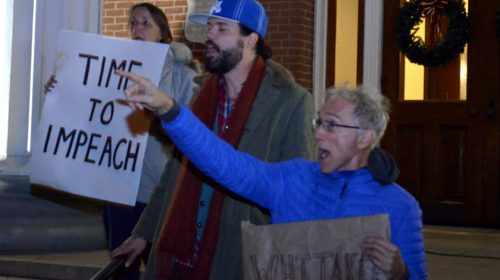 Demonstrators marched on Nashville, Chattanooga and Murfreesboro, among other cities. They packed the streets of Nashville Thursday night in support of Mueller, NewsChannel 5 reported. Whitaker has assumed the role of overseeing Mueller.

In Murfreesboro, the Women’s March descended on downtown with signs bearing such slogans as “TIME TO IMPEACH.”

The Women’s March on Nashville Facebook page called the protest “Nobody Trumps the Law” and “Rod Rosenstein Removal Protest.”

Sign up now to find a protest near you: https://t.co/RAfE4MYSz4 pic.twitter.com/NEY5spFyRB

NBC New York said more than 6,000 people in New York City demanded that special counsel Mueller be allowed to continue his Russia investigation. The demonstration was one of hundreds across the U.S. and overseas organized by the Move On advocacy group into a network called “Nobody Is Above the Law,” all set for the same time Thursday.

“Jeff Sessions was fired as attorney general, and we strongly believe it’s part of a larger plan to start discrediting the Mueller investigation,” said one organizer, Shannon Stagman.

The document was released on Twitter by Massachusetts Attorney General Maura Healey, who tweeted that Whitaker “recuse himself immediately.”

As part of Whitaker’s new role as the head official at the Justice Department, he will oversee the Russia probe and the agency’s other federal investigations, including the New York prosecutors’ look into the finances of Trump and his former aides.

Sessions had recused himself from oversight of the special counsel probe due to conflict of interest laws, leaving Deputy Attorney General Rod Rosenstein in charge, the East County Magazine said. With Sessions gone, Whittaker is now in charge of the investigation that he has criticized.

Legal analysts questioned whether President Donald Trump had the power to leapfrog others, such as Deputy Attorney General Rosenstein, and appoint Whitaker, who had been chief of staff at the department — a position that did not require Senate confirmation, The Washington Times said.

One Thought to “Leftist Groups Have Meltdown Over Whitaker Appointment as Acting Attorney General, Organize Protests Around Nation, Including Tennessee Cities”