President Donald Trump forced his controversial Attorney General Jeff Sessions to resign on Wednesday, setting the stage for a potential showdown with newly energized Congressional Democrats over the investigation of Russia’s involvement in the 2016 presidential election.

Sessions, in a letter to Trump, wrote that he was resigning at “your request,” accepting a fait accompli he’d long sought to avert despite being repeatedly chastised and publicly belittled by Trump over his recusal from oversight of the Russia probe.

In a pair of tweets announcing Sessions’ resignation Wednesday afternoon, Trump thanked the attorney general for his service and said Matt Whitaker, Sessions’ chief of staff and vocal critic of the Russia investigation, would take over as acting attorney general. A permanent replacement would be announced later, Trump said, without indicating whether he’d tap Whitaker for the top job at Justice send his name to the Senate.

The forced departure of Sessions, a 71-year-old former Republican Senator and early supporter of Trump’s 2016 presidential campaign, capped a turbulent tenure that hit a rough patch just weeks after Sessions took office in February 2017 and recused himself because of conflicts of interest.

Trump blamed the recusal for the appointment of Russia investigation Special Counsel Robert Mueller, and over the course of the attorney general’s 20-month tenure repeatedly castigated Sessions for failing to rein in what he derided as a “witch hunt” led by Mueller and “17 Angry Democrats.”

Rep. Elijah Cummings of Maryland, the top Democrat on the House oversight committee and a frequent Trump critic, urged Congress to investigate “the real reason” for the attorney general’s “termination.”

At a testy White House news conference earlier Wednesday, Trump was asked if he could stop the Mueller probe in light of potentially investigations by the newly empowered House Democrats. Trump responded: “I could fire everybody right now. But I don’t want to stop it because, politically, I don’t like stopping it.”

“Given his previous comments advocating defunding and imposing limitations on the Mueller investigation, Mr. Whitaker should recuse himself from its oversight for the duration of his time as acting attorney general,” Schumer tweeted.

In a statement issued late Wednesday, Whitaker did not address the question of recusal but he said, “I am committed to leading a fair Department with the highest ethical standards, that upholds the rule of law, and seeks justice for all Americans.”

White House counselor Kellyanne Conway told reporters on Thursday that she saw no reason Whitaker should recuse himself from the Russia probe because of comments he made about the investigation in his private capacity. 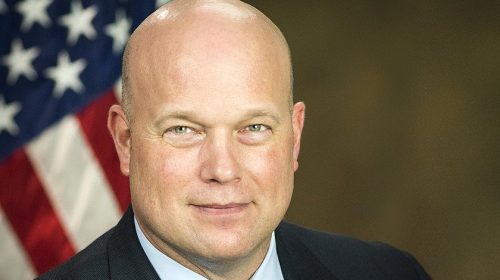 “The acting attorney general is in charge of all matters under the purview of the Department of Justice,” she added.

Whitaker served as U.S. attorney for the southern district of Iowa from 2004 to 2009 during the administration of former President George W. Bush. According to his LinkedIn profile, he headed Foundations for Accountability and Civic Trust (FACT), a self-described ethics watchdog, until September 2017, shortly before joining the Justice Department.

In an opinion piece for CNN.com in July 2017, two months after Mueller’s appointment, Whitaker wrote that the Mueller investigation had “gone too far” and urged Deputy Attorney General Rod Rosenstein, who’ll now be reporting to him, to limit the special counsel’s authority.

John Malcolm, a former federal prosecutor now with the Heritage Foundation, a conservative research group, said he saw no reason for Whitaker to step aside.

“He is the acting attorney general. He has no reason to recuse himself,” Malcolm told VOA.

Malcolm said Sessions did “a solid job of implementing the president’s law enforcement priorities” he praised the attorney general for “protecting the integrity of the department and trying to keep it above politics.”

Senator Lindsey Graham of South Carolina, a Republican member of the Senate Judiciary Committee and close Trump ally whose own named has been floated as a possible candidate for the top post at Justice, tweeted on Wednesday that he looked “forward to working with President Trump to find a confirm-able, worthy successor.”