The man who disrupted a Marsha Blackburn rally almost two weeks ago said on his Facebook page he will visit Blackburn and her staff in her new office after she takes the oath as U.S. senator.

Jones made his intentions clear this week, one day after the election.

“Somebody tell sister Marsha that the U.S. Senate office is a public office— it’s The People’s office— and unlike her campaign events she can’t have Tennesseans profiled, thrown out, and arrested simply for being there,” Jones wrote on his personal Facebook page.

“We will show up, we will raise the issues that impact our communities, and we will NOT accommodate ourselves to injustice.” 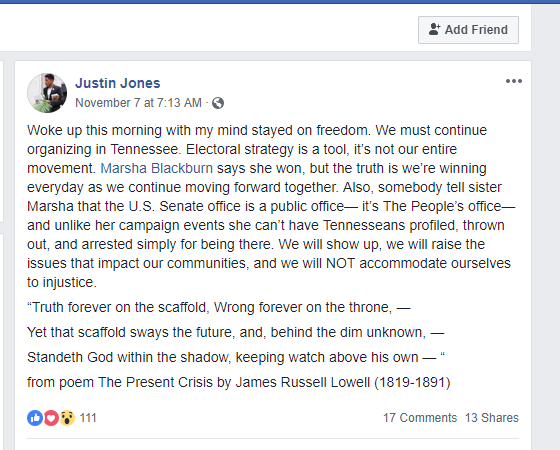 Jones, however, will have his own appointment with the justice system in Nashville before Blackburn is sworn in as a U.S. senator this January.

The self-promoting Vanderbilt University Divinity School student has been charged with criminal trespassing and resisting arrest for his conduct at a rally Blackburn had late last month with Republican U.S. Sen. Lindsey Graham at the Ray Stevens CabaRay Showroom in Nashville, as reported by The Star.

Tennessee GOP officials recognized Jones as an instigator from prior experience. They asked Jones to leave. Jones refused. Law enforcement officials removed Jones by force, but not without him resisting.

No one from Blackburn’s office returned The Star’s request for comment Thursday.

As reported, Jones has a habit of provoking his political opponents to anger, and he later portrays them on social media in the worst possible light, as aggressors, or even racists.

In 2017 Jones and his followers harassed Beavers because they didn’t approve of a bill she had in the legislature.

As shown on a video on the The Tennessee Activist Coalition’s Facebook page, Jones tried to force his way, uninvited, into Beavers’ private office. This was at a time when Beavers said people were sending her death threats.

According to video of the event, which Jones’ grandmother posted on her personal Facebook page, Jones called upon young people to fight for liberty and justice.

“Young people and those who are young at heart, we have five words for you,” Jones said as he accepted the award.

“See you in the streets. We will disrupt. We will organize. We will shut down injustice. Know we will not normalize hatred in this country.”

Nashville Police arrested Jones in August of last year during a vigil at Bicentennial Park to honor people killed during the Charlottesville “United the Right” rally, according to Patch.com.

Four people, including Jones, left the park and marched to the nearby First Tennessee Park, home of the Nashville Sounds, the website went on to say.

Jones and the other three people tried to enter the park after a game ended, even though cops warned them not to. One of Jones’ companions reportedly resisted arrest. That suspected reportedly had marijuana, a grinder, and a small pipe in her purse. Another of Jones’ three friends purposefully tripped a police officer and later resisted arrest.

The website went on to say Jones “was told by police not to jump in front of moving marked police cars.”

Quoting from Jones’ arrest report, the website said he “then jumped in front of a moving patrol car causing a danger to himself and the action served no legitimate purpose.”

As The Tennessee Ledger reported in a glowing piece, Jones grew up in Oakland, Calif. a city well known for producing far-left fringe protestors.

Jones came to Nashville after receiving an endowed scholarship to study social justice and activism at Fisk University, The Ledger reported.