Members of the Tennessee Republican Assembly (TNRA) on Thursday called upon state legislators to officially censure newly-elected State Rep. London Lamar (D-Memphis) for saying Tennessee is racist and its Republican voters are uneducated.

As reported, Lamar livestreamed those controversial comments on her Facebook page last week. She removed the video a few days later, but only after The Tennessee Star broke the story last weekend. The story has since gone viral worldwide.

A censure is a formal reprimand.

TNRA President Sharon Ford told The Star she and other board members decided censure is appropriate.

“We were all equally incensed that any elected official would portray a group of people in such a racist manner,” Ford said.

Lamar did apologize, as reported, but Ford said it was “not effective.”

“It was more like ‘Oh, I’m sorry you people got offended,’ Ford said.

“People need to understand this has not gone viral in the traditional sense. It is on the British Daily Mail. It went right across the pond. This is not acceptable, and my concern is there won’t be due diligence done on it by our legislators because the attitude could be that ‘Oh well, the Democrats are such a small minority, what does it matter what she says?’”

But Tennesseans, Ford went on to say, should hold all elected officials to task for their words, regardless of whether they have an R or a D next to their names.

“Otherwise, we will have another Maxine Waters on our hands in Tennessee,” Ford said.

The Tennessee Republican Assembly “is a socially, morally, and fiscally conservative group of individuals committed to strengthening the Republican party by upholding the traditional, Republican ideals that represent the American founders’ original intent,” according to the group’s website.

The Star asked Tennessee Republican Speaker of the House Beth Harwell if plans for such a censure are under way.

Kara Owen, spokeswoman for outgoing Tennessee Republican Speaker of the House Beth Harwell, said her boss is on her way out.

“If the next general assembly wants to take action in some way then that will be their prerogative, but the speaker is not going to be a member of that assembly,” Owen said.

In an emailed statement, Casada said the following:

“Unfortunately, this is the kind of behavior we have come to expect from the far left. This type of conduct will not be allowed on the House floor.”

Legislative Librarian Eddie Weeks was unavailable this week to say how many other state legislators have gotten censured throughout Tennessee’s history.

Ford said her organization is more about principle over politics.

“This mentality we have allowed to germinate and now go full-tilt in this country is we are governing by attack, whether it’s Brett Kavanaugh or Tucker Carlson and his daughter,” Ford said. 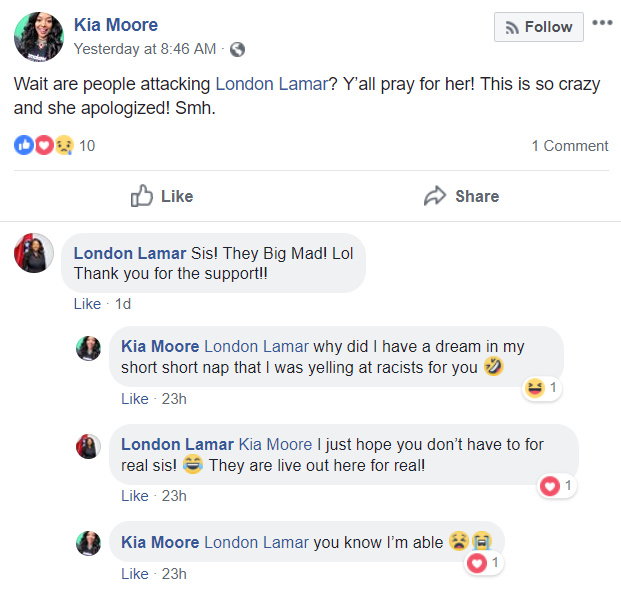 “We are going to have to take civility back for our country, and it’s not going to happen by us sitting on the sidelines and saying ‘Well, I’ll do the right thing and it’ll all work out.’ That’s not working.”

On her personal Facebook page Wednesday, Lamar’s allies, with pastors among them, insisted black people are incapable of racism against whites, with Lamar in agreement.

Despite Lamar’s prior apologies, many Tennesseans’ outrage over her remarks seemed to amuse her.

“They Big Mad! Lol,” Lamar wrote in one comment concerning all the people reprimanding her on social media.