The ongoing insurrection against the duly elected government of the United States isn’t being led by the violent Far Left thugs of Antifa, nor is it being led by the political thuggery of power-hungry Democrats on Capitol Hill and in their corrupt urban strongholds – it is being led by black-robed revolutionaries working from federal courthouses, especially in the California-centered Ninth Circuit. 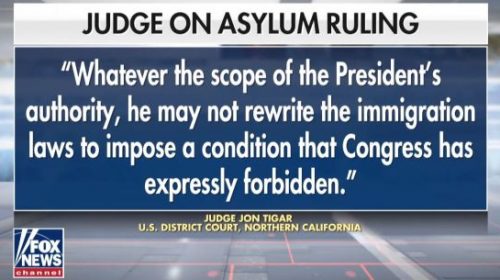 The latest raid on the constitutionalist forces was led by U.S. District Judge Jon S. Tigar who preemptively prohibited the president from declining to process the asylum claims of aliens who enter the United States illegally.

The Mexican government says it is aiding more than 5,600 migrants from Honduras, El Salvador and Guatemala on the U.S. border — 2,610 in Tijuana and 2,995 in Mexicali.

Judge Tigar, appointed by President Barack Obama, issued a 37-page ruling that appears to ignore the Supreme Court’s ruling that upheld President Trump’s Executive Order barring travelers from a list of majority-Muslim nations.  (You can read the ruling issuing a Temporary Restraining Order (TRO) through this link courtesy of The Washington Post.)

The order is full of political comments and dicta that render it more of an open borders manifesto than a sober judgement of the legal authorities and precedents that were relied upon in constructing the president’s Executive Orders issued earlier this month.

Tigar’s TRO was the latest in a series of judge-led assaults on presidential authority to defend the United States against the illegal alien invasion and the internal enemies that seek to facilitate it. As The Washington Post noted, federal judges have temporarily blocked President Trump’s efforts to strip funding from “sanctuary” cities and rescind temporary work permits and deportation protections from roughly 1 million illegal aliens who were protected by Obama and thwarted the president’s “zero tolerance” policy that was intended to detain illegal aliens to prevent them from refusing to appear for asylum hearings and simply disappearing into the United States.

Therefore, the fact that the administration’s action is entirely reasonable will not matter. No more will it matter that, contrary to numbing media repetition, the rule and proclamation derive from federal statutory law. Nor will it make any difference that, in part, the president is relying on the same sweeping congressional authorization based on which, just four months ago, the Supreme Court affirmed his authority to control the ingress of aliens based on his assessment of national-security needs.

Just two things will matter. The first is that the asylum restrictions represent a Trump policy that reverses Obama policies — specifically, policies of more lax border enforcement, and of ignoring congressionally authorized means of preventing illegal aliens from filing frivolous asylum petitions (with the result that many of them are released, evading further proceedings and deportation). The second is that, precisely to thwart the reversal of Obama policies, President Obama made certain that the vast majority of the 329 federal judges he appointed were progressive activists in the Obama mold.

The media-Democrat complex will tell you this is “the rule of law.” In reality, it is the rule of lawyers: the Lawyer Left on the front line of American decision-making, a line that runs through courtrooms, not Capitol Hill.

“This decision will open the floodgates, inviting countless illegal aliens to pour into our country on the American taxpayer’s dime,” she said in a statement. “We will take all necessary action to defend the executive branch’s lawful response to the crisis at our southern border.”

What Andy McCarthy calls “the front line of American decision-making” is no longer decision-making; it is an all-out Civil War with Far-Left activist judges acting as the shock troops of the insurgents.