The ongoing trade dispute between the U.S. and China has occupied much of the business media’s focus in recent months. But an “old” debt battle between the two countries that has escaped notice by most political and business leaders in both countries has recently drawn the attention of President Donald Trump — and his top economic advisors. At the centerpiece of this issue is a little known Foundation based in Lewisburg, Tennessee that represents the holders of the debts owed by China.

Jonna Bianco, a Tennessee cattle-rancher and President of the American Bondholders Foundation (ABF), represents more than 20,000 owners of bonds issued by Chinese governments before the Communist revolution in 1949.  The ABF claims that American citizens are owed more than $2 Trillion by China.

Today’s China is the successor to the Republic of China, which came to power in the 1911 Revolution that ended over 2,000 years of imperial Chinese rule. To finance its new government, China went to the world capital markets from 1912 onward and raised hundreds of millions of dollars in a series of syndicated financings of Chinese Government Gold Bonds underwritten by investment banks from all the major industrialized nations of the world, including J.P. Morgan, Deutsche Bank and the predecessors to Lehman Brothers and Citibank. As was common in long-term bond financing at the time, these 60-year bonds were backed by gold with a lien on Chinese tax revenues as security. 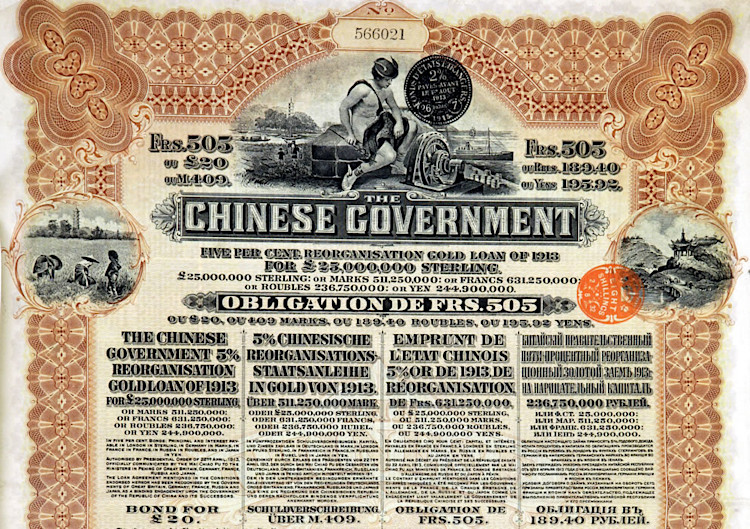 The U.S. also issues bonds and China currently owns about $1.2 Trillion worth. The ABF has testified before Congress that thousands of American families bought (and still retain) those bond certificates, relying in part on the successor government doctrine, whereby the new Chinese government was still responsible for the debts of the predecessor government. When the U.S. elects a new President, including times when political party control shifts, it still pays its debts. So should China. These bonds are not corporate or old business bonds, these are government sovereign gold bonds. The funds raised and debts incurred were used to build the competitive economic powerhouse that is China today — they should repay the loans they used to accomplish that.

After the Communist People’s Republic of China (PRC) government came to power in 1949, it disavowed its obligation to repay the bonds in violation of the successor state doctrine, which is a fundamental principle of international law. The U.S Court of Appeals has stated: “A monarchy may be transformed into a republic, or a republic into a monarchy; absolute principles may be substituted for constitutional, or the reverse; but though the government changes, the nation remains, with rights and obligations unimpaired.” Lehigh Valley R. Co. v. State of Russia, 21 F2d 396 (1927); citing Moore, Digest International Law, vol. 1, p. 249.

Sovereign debtors are usually anxious to repay or restructure debt by predecessor regimes rather than repudiate it. That debt approach is critical in order for a nation to retain access to capital markets. Last year Russia repaid the last of its outstanding $70 Billion in Soviet-era debt. In 2010 even North Korea attempted to settle part of a debt to the Czech Republic—with $500,000-worth of ginseng root.

The PRC has implicitly acknowledged that there is no principled basis for its refusal to repay Americans’ pre-1949 Chinese bonds because they repaid the exact same bonds held by British citizens in 1987. That repayment resulted after then-Prime Minister Margaret Thatcher locked China out of the London capital markets until it made good on those debts.

In 2001, the ABF was founded by Bianco after the Department of State, the Treasury, and the National Security Council told her they had decided not to pursue China’s default on its sovereign debt since it was a “private citizen’s matter.” Bianco has worked to raise the level of awareness of this issue to Congress which has issued several bipartisan Resolutions out of the House and Senate to hold the PRC accountable to honor their defaulted sovereign debts to Americans. It is one thing for China to stiff 20,000 low- and middle-income U.S. citizens; but it’s an entirely different thing to stiff 315 million Americans whose tax dollars back the U.S. treasury bonds China holds.

Representatives of the ABF met with Trump in August and Bianco says he and his financial and economic advisors were almost universally in support of pursuing payment from China, or using it to claim an offset against the U.S. debt obligations to China. As Trump and Chinese President Xi prepare to meet in Argentina at the G-20 Summit later this week, it will almost certainly be an issue that will come up in the discussions, though they will primarily seek to deal with the contentious trade fight.  But if Trump embraces the “Iron Man” approach that Thatcher utilized in resolving the same bond payment issue on Britain’s behalf, then American taxpayers and bondholders could see a significant financial windfall that is long overdue.

Steve Gill has been a prominent and well known figure in Tennessee Republican politics for more than three decades. A graduate of the University of Tennessee, where he played varsity basketball, and the University of Tennessee Law School, Gill was a White House fellow during the transition year between the administrations of George H.W. Bush and Bill Clinton, a Republican candidate for Congress in 1994 and 1996, and a well known radio talk show host in Nashville for more than a decade.  He is also the Political Editor for the Tennessee Star and the host of both the Tennessee Star Report and Battleground State News Report.

2 Thoughts to “Steve Gill Commentary: Is a Tennessee Foundation a Key to Resolving Debt and Trade Issues with China?”