NASHVILLE, Tennessee – Speaker-Elect Glen Casada says that as Speaker, his job is “to find the strong conservatives, put them in the right committee, and let them lead.”  Casada’s statement was made to a group of middle Tennessee activists in response to a question about the key things he wants to focus on during session.

Casada easily won the nomination of the House GOP caucus for the Speaker’s position last month. The formal election for Speaker and Speaker Pro- Tempore will be held when the Tennessee General Assembly convenes in January.

The House Republican Caucus Bylaws require that members vote for the nominated Speaker and Speaker Pro-Tem Elect, or be automatically expelled from the Caucus. With a Republican super majority in the House, holding 73 of the 99 seats, Casada’s election as Speaker of the 111th General Assembly is a virtual certainty. During this interim period he is generally referred to as “Speaker-Elect,” though he could also be called the “Presumptive Speaker.”

The group, Nashville Sentinels, organized around the Heritage Action For Action (HAFA) model and is spear-headed by longtime Nashville Republican Ed Smith.

The Nashville Sentinels meet monthly and at its February meeting then Majority Leader Casada spoke to the group, invited for his favored candidate status to succeed Beth Harwell as Speaker, caused by her departure to seek the Republican nomination in the 2018 gubernatorial primary.

While on a tour of the Cordell Hull Building, approaching its second year of use after the Tennessee General Assembly relocated into the fully renovated building just about one year ago, Casada scheduled a few minutes out of a very busy schedule to speak to the Sentinels.

Casada and his team, which includes Cade Cothren who will be Speaker Casada’s Chief of Staff, have started the transition process to take over the Speaker’s office. Casada was selected as the Speaker-Elect during the House Republican Caucus organizational meeting November 20. 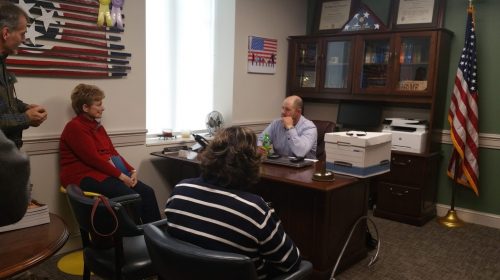 Regarding the transition, Casada reported that they’ve sat down twice in meetings with the clerk and legal offices, “just kind of getting our feet wet” and “getting a feel of all the areas that we are involved in.” Casada shared, “And it’s a lot.”

Casada has also had several meetings with Governor-Elect Bill Lee, which Casada seemed pleased about as he told the group, “He will do what’s right. We’ll all be impressed with him.”

Elaborating in his role as Speaker, Casada said that the legislative branch is not as direct as Governor-Elect Bill Lee in the Executive branch. His agenda as Speaker, Casada advised, “is getting the best people, making sure we pass conservative bills and make sure we keep the state going in the direction that we’re headed.”

Casada gave an example regarding the judiciary committees, “I’m not an attorney, don’t know much about the law, but I do know that Amendment One that Nashville passed is not wise.” Casada was alluding to the 11-person government oversight board amendment to the Nashville Metro Charter with an annual budget no less than $1.5 million, which passed with nearly 59 percent of the vote on the November 6 ballot question.

I’ll sit down with them and express my concern and turn those guys lose to do research. So, what I think the state needs to do is set up a template so that any cabinet that wants to do an oversight board, you know, it’s equal representation, you need to be an American citizen. I’m really leery of that subpoena power that they’ve given. So make it so that if the locals want to do it, fine and dandy, but it’s going to operate in a way that doesn’t risk our security and hurt our police department.

A Sentinel commented about Casada coming out early indicating that he might look at Amendment One which resulted in conservative support. Casada responded that “Being a point of center for our shared values and just speak out” is the second role he will play as Speaker.

Casada encouraged continued contact with his staff as well as support of legislators by letting them know when they did a good job and telling them to “stand firm.”

While there were no formal House meetings scheduled that day, there were several other House members that the Sentinel group encountered on their tour of the facility, and the Representatives were as gracious as Casada and his staff about taking time for a visit.

Representative Kelly Keisling (R-Byrdstown) handed out his business cards to the group in a hallway encounter and Representative Darren Jernigan (D-Nashville) took time for an impromptu and productive introduction with two of his constituents.

Representative Andy Holt (R-Dresden) invited the Sentinels to his office, where the group had a fairly involved discussion on issues that will probably be addressed during the upcoming legislative session.

All of the experiences reflected Speaker-Elect Casada’s closing statement as the Sentinels departed his office, “It’s a team effort here. It’s not just one or a few people, it’s a team effort.”

One Thought to “Speaker-Elect Glen Casada: It’s My Job To Find Conservatives And Let Them Lead”