CLARKSVILLE, Tennessee – At a town hall in his home town of Clarksville, Congressman-Elect Mark Green delivered a brief update about his transition as the U.S. Representative for Tennessee’s 7th District before spending most of the scheduled time taking questions from attendees who were both supporters and opposition.

Green ran unopposed in the August Republican primary and took 67 percent of the vote against newcomer Democrat Justin Kanew in the November general election to fill the seat vacated by eight-term Representative Marsha Blackburn. Blackburn left the seat for a successful run for U.S. Senate to replace the retiring Bob Corker.

Before officially being sworn into office on January 3, 2019, Green scheduled six town halls around the district between December 11 and 13, in Franklin, Waverly, Clarksville, Lawrenceburg, Lexington and Selmer. The 80 chairs at the Clarksville location were all but filled at Wednesday’s event.

Green reported that, although there will be new phone numbers, his team will be taking over Marsha Blackburn’s existing office locations in Clarksville and Franklin. He and his Chief of Staff, Stephen Saio, recently completed two weeks of orientation, which included ethics training. Green’s wife, Camie as well as staff members will be trained and available to give tours.

In terms of committees Green will be on, being “former military from a military town, obviously I have a deep love for our soldiers, sailors, airman, marines and our veterans,” he put his first preference as House Armed Services (HAS). “I think it’s the place I can make the biggest difference and it’s really where my heart is.”

Foreign Affairs, Homeland Security and Government Oversight rounded out Green’s second, third and fourth choices, respectively. As a fifth choice, Green selected Energy and Commerce, which he noted is nearly impossible to get as a freshman, resulting in him likely get his other choices.

Green was elected House Republican freshman president, which will allow him the opportunity to be in leadership discussions about bills and give the opinion of the freshman class. “It’s good for Clarksville. It’s good for our community,” which Green said, “hasn’t had a U.S. Representative since 1883.”

Speaking to the divisiveness in the country, one of the initiatives Green will take up is what he called the Reagan O’Neill Club, alluding to Republican President Ronald Reagan and Democrat 47th Speaker of the House Tip O’Neill who were opponents by day but socialized at night. In that spirit, Green said he will work on getting a few Democrats and Republicans together, probably starting in February.

Green said that he found it unconscionable that if there were a federal government shutdown, as is currently being discussed, Gold Star wives and husbands lose their benefits. His first bill “will be to make sure that those benefits do not get turned off in a government shutdown.”

After sharing that, like his State Senate office selection in the newly renovated Cordell Hull Building based on a lottery he went last in his U.S. House office selection, Green spoke of his open door policy.

“Regardless of party, ideological belief, and whether we are diametrically opposed on every issue my door, our office is open.” Green elaborated further,

You can come and talk with my staff, you can set up an appointment with me, because that is just what’s right and good. There may even be people in this room who don’t even see me as their Congressman. They didn’t vote for me, they don’t look at me that way. But I think of everybody in this room everybody in this district as my constituent, which means in a way you’re my boss. And that is how I approach this.

When Green started taking questions and comments, about a quarter of the attendees took advantage of the opportunity, with about a third of those being veterans.

Discussion covered a variety of topics including divisiveness, veterans’ benefits, women’s reproductive rights, as well as funding of the military, the wall and the IRS to ensure that taxes owed are collected.

On the topic of divisiveness, Green said that he genuinely believes the media is stoking the fire, which received the loudest applause of the night.  On the issue of working or reaching across the aisle, Green pointed to the many bills he passed with Democrat House member Joe Pitts.  One in particular Green called out as monumental and ended up impacting the whole country that required RV manufacturers to install carbon monoxide detectors because of deaths that occurred at a Bikers Who Care (BWC) Toy Run. 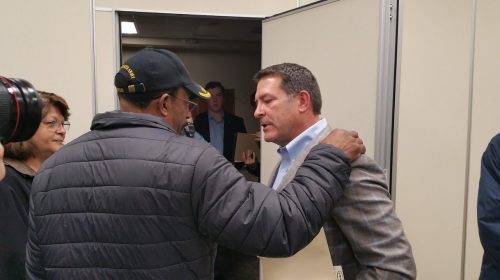 Speaking as a veteran, African-American woman and a victim of domestic violence by a non-citizen green card holder, an attendee reading from her phone asked if Green would support legislation that would not allow someone with a protective order against them to get a gun or violate the order.

After confirming that the woman is currently in a safe place, Green said that while he would confirm it, it is his understanding that somebody with even a misdemeanor domestic violence cannot own a gun. Green, alluding to the Bureau of Alcohol, Tobacco Firearms and Explosives (ATF) Firearms Transaction Record, said that, “I know when I’ve purchased guns, the question is there have you committed even misdemeanor domestic violence.”

Changing topics, one attendee pointed out that, looking around the room, there aren’t a lot of people of his younger generation that knowledgeable about the functioning of government. Green spoke about the opportunities for internships both in Washington D.C. with communications and legislation as well as the local offices with constituent services.

That somewhat naturally lead to an attendee pointing out the effort Green is involved with, the 917 Society. As Green explained, the goal of the non-profit is to put a pocket constitution in the hands of every single 8th grader. Calling it “a phenomenal thing,” Green said of the effort to raise funds to achieve the goal, “It’s something that I donate my money to, and I encourage you, if you have resources to help.”