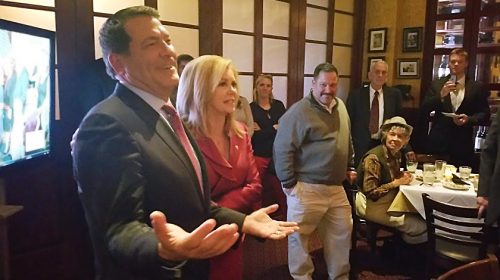 Green is a former special operations flight surgeon and veteran who did tours in both the Iraq and Afghanistan. The freshman congressman appeared on “Fox News Sunday” this past weekend and said he would support Trump on improving border security.

Green said in a statement Tuesday:

Tonight, a lot of Americans learned, perhaps for the first time, there is really an urgent crisis and it involves our southern border. The crisis is causing human suffering and death, and it is heartbreaking.

One of the more another alarming stats shared – 90% of the heroin in our country comes across our southern border. Heroin, in turn, kills 300 Americans each week.

As a veteran of the War on Terror, I know that if we were losing 300 Americans a week in the field of battle, Americans and our leaders in DC would be strategizing how to win the war and limit casualties. In this case, the strategy is simple – we secure our border, and you can’t secure the border without a wall.

As a doctor and a physician, I have dedicated my life to alleviate human suffering. It is an absolute joy to watch someone who was in pain find health and life once again. Tragically, that is not every patient’s story. I’ve had the terrible task of diagnosing many patients with terminal illness. I’ve had to tell mothers and fathers, sons and daughters that they have a disease where the road to a cure will be long and arduous. I’ve known injured soldiers die in service to their country on the field of battle. There is no worse emotion as you watch someone die than the feeling of knowing there’s nothing you can do to stop it.

In this case, we are not powerless. We have the prescription that can fix this. We can end this human suffering, and we can do it very easily.

I call on my Democrat colleagues to heed the president’s request for border security for all our sake.”

Blackburn, who received Trump’s backing during her Senate campaign, issued a statement that said:

President Trump affirmed his position on securing the Southern border and is to be commended for holding firm on his commitment to the country to address our broken immigration system. The time has come for Chuck Schumer and Senate Democrats to stop playing political games with the security and sovereignty of the United States. The Senate should not take up any measure unless President Trump has indicated that he will sign it into law. Until our border is secure, every state will remain a border state and every town will remain a border town.