Governor-elect Bill Lee has continued his preference for appointing those closely affiliated to either liberals or Bill Haslam to top positions in his Administration. His latest selection, Christi Branscom of Knoxville, whom he named to his cabinet on Thursday as head of the Department of General Services, fills both boxes.

Branscom spent five and a half years as the Deputy Mayor and Chief Operating Officer for extreme liberal Knoxville Mayor Madeline Rogero, during which time Rogero opposed 2d Amendment rights, advocated strongly for LGBTQ issues (including vocal opposition to legislation designed to protect women and girls from men entering their bathrooms and locker rooms), and actively supported the anti-Trump “Women’s March” protests, including speaking at the January 2018 event in Knoxville. 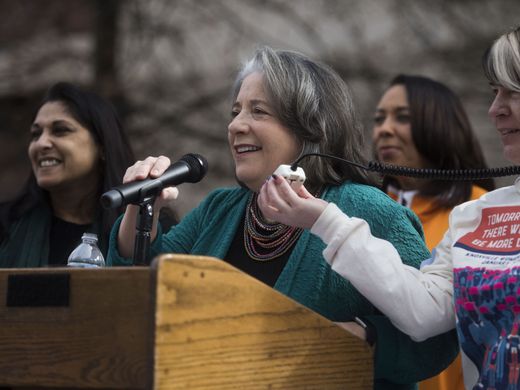 Rogero is not new to liberal activism. During the mid-1970s, Rogero worked as an organizer for César Chávez’s United Farm Workers, a labor union that advocated for migrant farm workers. More recently, the pro-abortion community organizer was a Hillary Clinton delegate to the 2016 Democratic Party Convention and has embraced sanctuary city “lite” policies.  Her chief Deputy for five years is now the choice of “conservative Christian” Bill Lee as Commissioner of General Services.

One conservative noted that if Branscom had no problem being ideologically aligned with Rogero for five and a half years, how can she now be part of a supposedly conservative Lee Administration. “Either she has no core conservative principles, or she doesn’t really believe Lee is very different from Rogero.” Another conservative supporter of Lee defended Branscom’s selection by saying she shouldn’t be judged by who she worked for, but acknowledged that her long affiliation and support for liberal Rogero is “troubling.”

Branscom left Rogero last February and rejoined her father’s business, Knoxville-based Partners and Grace Construction.  At the time her father Russ Watkins, CEO of Partners, said the company would rely on her contacts and experience to focus on providing services “to cities, counties and other public-sector entities.”

It is not clear whether Branscom’s firm has any direct state contracts (at this point) nor whether they will be barred from bidding directly or participating as a vendor on state contracts while Branscom is Commissioner. Branscom spearheaded several development projects for the City of Knoxville as Rogero’s Deputy, including negotiating the deal to transfer ownership of Lakeshore Park from the state to the city and preparing it for development. Among the projects that Partners specifically highlights on its website is the work they did on Lakeshore Park.

Tennessee Governor Bill Haslam reportedly pushed Lee to select Branscom for her position. (In fact, the same PR firm represents the Governor’s family business – Pilot/Flying J – and Partners/Grace Construction.) Rogero narrowly lost the Knoxville Mayors race to Haslam when he was first elected, after which he appointed her as Community Development Director in his Administration and groomed her to follow as his successor, which she did. Branscom was considering a race for Mayor herself, as Rogero is term limited, but realized that she couldn’t pursue the position since she didn’t live in the city.

Conservative Republicans who formed the base that won Lee the Republican Primary for Governor are already expressing concerns about his personnel choices as he prepares to take office. The Branscom appointment is unlikely to alleviate those worries.

Steve Gill is the Political Editor at The Tennessee Star and co-host of The Tennessee Star Report with Steve Gill and Michael Patrick Leahy aired weekdays 5am – 8am on Nashville’s Talk Radio 98.3 and 1510 WLAC
Photo “Christi Branscom” by knoxvilletn.gov and “Bill Lee” is by Bill Lee.