NASHVILLE, Tennessee — If you voted for Donald Trump for president in 2016 then it’s because you are susceptible and Trump whipped you “into a frenzy,” said former Republican Senator Jeff Flake during a visit to Nashville Thursday.

Flake made his remarks to perhaps a crowd of 2,000 people at Vanderbilt University as part of the school’s Chancellor’s Lecture Series.

The moderators at the event — as well as most of the audience members — seemed hostile to Trump and his voters.

Flake, of course, has little love for Trump.

Flake told the crowd Trump only won because of “a particularly weak opponent on the Democratic Party side,” referring to Hillary Clinton.

“Any of the 17 people he vanquished in the primaries would have won that race. But Trump motivated people to get out and vote,” Flake told the event moderators. 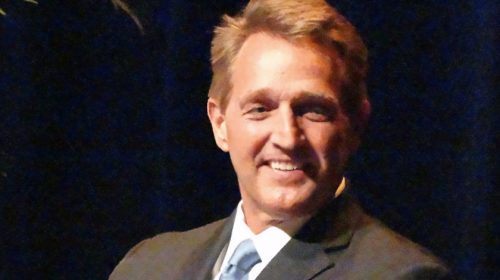 Flake compared Trump’s win to what former Republican California Gov. Pete Wilson did in 1994 with Proposition 187. According to The Los Angeles Times, that ballot “sought to stem illegal immigration and address its costs by cutting off state services, including healthcare and public education, to those in the country illegally.”

Voters in California passed that referendum, but, as The Times pointed out, the courts blocked most of what the people wanted.

“The Trump base is very real and it is very solid, but politically it is just not large enough to carry ahead,” Flake said.

Flake also said the Internet, and the instant news that goes with it, “has changed politics drastically.”

“Now, an influential blog is more important than a newspaper,” Flake said.

“All of the incentives (for people in politics) now say don’t deliberate. Don’t show that you might be open to changing your mind. People in my former position will make the calculation that I only want to anger one side.”

Flake also told the crowd he doesn’t expect Robert Mueller, who is investigating alleged Russian interference in the 2016 U.S. presidential election, will produce a report with enough evidence to warrant Trump’s impeachment.

“I would hate to see him impeached,” Flake said.

“I hope we don’t go through an impeachment process because of what it does to a divided public.”

Flake served in the U.S. House of Representatives from 2001-2013 before his election to the U.S. Senate.

As a Republican senator, Flake sat on the Judiciary Committee, Natural Resources Committee, and the Foreign Relations Committee.

When asked, Flake told the Vanderbilt audience he will not vote to re-elect Trump in 2020.