NASHVILLE, Tennessee — Republican Bill Lee took the oath as governor on Saturday and then delivered a broadly inspiring, almost pastoral, inaugural address in a 15-minute speech that did not provide much in the way of the specifics of his agenda.

The inauguration was held indoors at War Memorial Auditorium due to rain.

Lee began his address with a compelling historical note that traced his own family’s history in Tennessee. 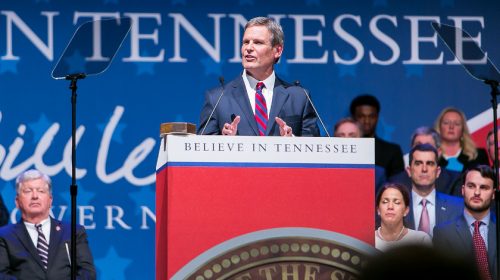 “The man that I spoke of was Charles Blaxton Lee, and he was my seventh great-grandfather.”

Lee said we in Tennessee “stand here today beneficiaries not of great governments of the past but of the lives of the great men and women who have come before us. Men and women who forged difficult lives on the frontier who formed small towns and eventually larger cities. People who cleared the land and planted crops and built businesses and worked in factories and created industry and created a state like it says on our seal, a state of commerce and agriculture.”

He closed the speech with a reference to those early Tennesseans.

“Our descendants, seven generations from now. What will they say of us? Were we strong and courageous? Were we faithful? Were we committed? Were we certain? Did we come together to meet the challenges we face with courage and optimism and a belief in each other?”

“If we meet the challenges of this moment — they too will say of us they were Tennesseans,” he concluded.

Lee offered rhetorical flourishes at the broadest level that appealed to conservatives and moderates. 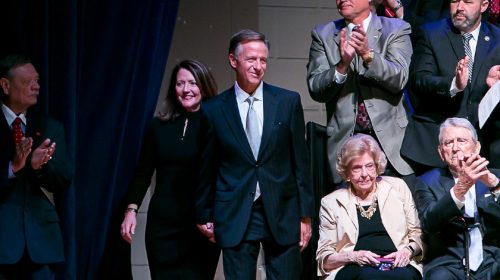 Lee appealed to conservatives when he said,  “no government will solve the greatest problems that we face.”

“Government is not the answer to our challenges. Government’s role is to protect our rights, our liberty, and our freedom,” Lee said.

“I believe in a limited government that provides unlimited opportunities for we the people to address the greatest challenges of our day. Most of the things that have created the greatness of Tennessee don’t have much to do with government at all. Our strength has always come from our people.”

“Standing here, in our state’s capital, we see reminders of your administration’s success everywhere. Growth and opportunity can be seen on every corner, from education to economic development,” Lee said of Haslam.

“You laid a foundation — a remarkable foundation — that we get to build upon and we are the envy of many states.”

Grassroots conservatives in Tennessee have harshly criticized Haslam for introducing and forcing through the Tennessee General Assembly the Improve Act, which raised gasoline taxes by six cents per gallon and gave the twelve largest counties in the state the authority to hold referenda to increase local sales and other taxes to finance transportation projects critics refer to as “boondoggles.”

On the first day of his campaign for governor in April 2017, Lee refused to criticize the Improve Act, which had passed both the House and Senate but had not yet been signed by Gov. Haslam, saying the legislation, now law, was “water under the bridge.”

Notably, in his inaugural address on Saturday Lee failed to mention school choice, which he highlighted as one of his Ten for Tenn priority issues in his “contract with Tennesseeans,” introduced one month before the Republican gubernatorial primary.

Instead, Lee said the state’s priorities should expand to focus on specific areas of education.

“Tennessee has the highest rate of improvement in educational outcomes of any state in the country. Yet we are still in the bottom half of states,” Lee told the audience. 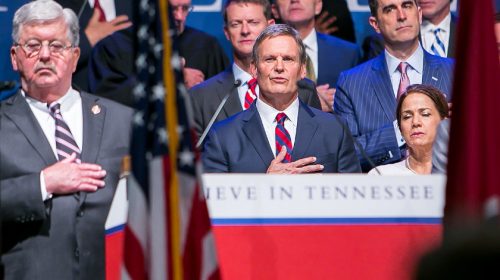 “I believe that education is much more than a test score. It’s about preparation of a child for success in life. And a resurgence of vocational, technical, and agricultural education and the inclusion of civics and character education combined with reforms will take Tennessee to the top tier of states.”

As The Tennessee Star reported Friday, Lee named 36-year-old Penny Schwinn, a graduate of the University of California at Berkeley, formerly affiliated with Teach for America, as Tennessee’s new Commissioner of Education.

Lee’s announcement of this appointment made no mention of school choice.  It was not mentioned either as a priority of his administration, or as an area in which Schwinn has any interest, experience, or focus.

Shortly after he won the primary in August 2018, Lee removed the list of Ten for Ten promises from his campaign website.

However, a few hours after he was sworn in on Saturday afternoon, Governor Lee’s official website posted this statement of priorities in education: 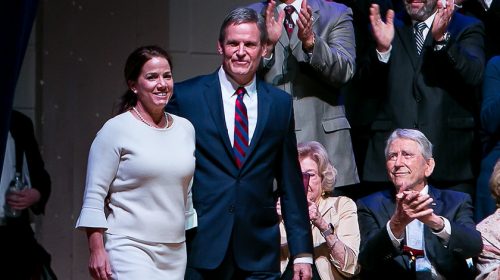 “Empower parents to choose the best educational option for their students.”

How and when this general objective is translated into specific legislation that can be enacted into law, however, remains unexplained.

Lee went on to say in his inaugural address that most of Tennessee’s communities and neighborhoods are safe, yet violent crime continues to rise in all its major cities. He suggested the best way to combat crime is one that is tough and, at the same time, smart — but he didn’t offer details.

The new governor did say the state should help non-violent offenders re-enter society.

“Ninety-five percent of people sitting in jail are coming out,” Lee said, noting that half will commit crimes again.

“We need to help non violent offenders re-enter society not re enter prison,” he added.

Another of Lee’s stated priorities is health care.

“Too few Tennesseans have access to health care that they can afford,” Lee said.

Again, Lee didn’t offer specifics on what his policy plans for that were. 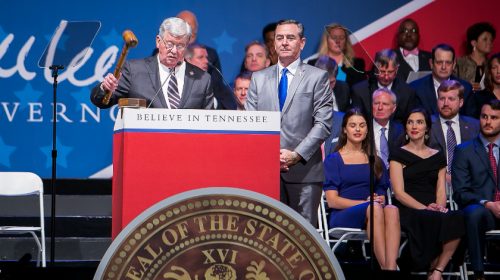 Sources tell The Star the governor will not spell out his specific policy proposals until March 4 when he delivers the State of the State address, more than two months after the Tennessee General Assembly’s current session convened on January 3.

This unusual vacuum of specific legislative policy proposals provides the leadership in the Tennessee General Assembly – Speaker Glen Casada and Lieutenant Gov. and Speaker of the State Senate  Randy McNally – an opportunity to set their imprint on the state’s agenda before the governor does.
– – –