NASHVILLE– The Fisk University Bulldogs split with the Hiwassee College Tigers in front of a sold-out crowd in North Nashville on Wednesday.

Lady Bulldogs Run Out of Gas in Home Loss 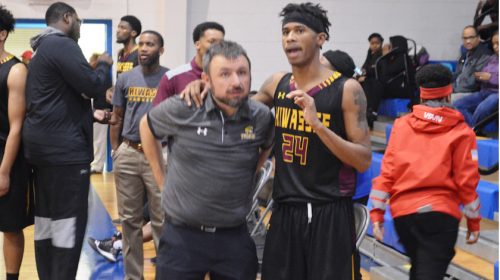 The first half was close as the Lady Bulldogs went into the locker room down by two points and were primed to deliver an upset.

“At the end of the day, we have to learn how to keep our energy throughout games,” said Fisk coach Lauren Falohun. “We didn’t finish around the rim. We dominated them on the boards, but we didn’t take care of the ball. That really hurt us.”

The Lady Tigers had four players in double figures led by Leisa Butler’s 22 points. After only being up by five to start the fourth quarter, they scored the first six points in the final stanza and never looked back. Hailey Browning added 17 points, J’Lynn Majors had 13 and Ashley Roby scored 11 for Hiwassee.

In a game that saw both teams go on streaks throughout the game, the Fisk Bulldogs (7-14) used an 11-0 run in the final 2:11 of the second half to defeat the Hiwassee Tigers (9-13) 64-59 in front of a raucous crowd at Fisk.
Both teams played sluggish in the first half and the Bulldogs went into the locker room leading by five. Hiwassee shot 25 percent in the half from the field but kept the game close by going 7 of 7 from the charity stripe. Fisk shot 38 percent including going 0 of 9 from behind the arc.

The Tigers used a 7-0 run to take the lead in the second half at the 15:34 mark. Guard Ben Snider (15 points) scored five during the run including a three-pointer to tie the game 39. The game was a seesaw affair throughout then the Tigers took what looked like would be a stranglehold of the lead when senior Jay Johnson hit a here point shot to give his team a 59-53 lead with 2:11 remaining.

“That (shot) was one of the very few that fell for us,” said Hiwassee head coach Jim Raby. “We were 19 of 70 from the floor. The worst offensive game we have had in I don’t know how long. We just missed everything in the paint. Trying to do too much with it. Worried about contact, double pumping trying to look good. We played really bad today. I honestly thought looking at the stat sheet that they would beat us by more. This is a tough place to play and my guys got caught up with the crowd.”

The final 2:11 belonged to the Bulldogs. With 1:59 left, Addison Miller (16 points and 10 rebounds) made a tough three-point play to cut the lead to three points. Miller came alive in the second half hitting both of his three-point shots and scoring 12 of his 16 points after the half.

“I was having trouble in the first half shooting the ball, but I relied on my teammates and they stepped up to the challenge,” said Miller. “It all started for us on the defensive end. We locked down on them late in the second half and we were able to come down and knock down some bigtime shots.” I appreciate our student body coming out to support us. They brought energy for us down the stretch.”

After a turnover, Fisk forward Montreal Nabors (17 points and 10 rebounds) hit a three-pointer to tie the game at 59. The Tigers then turned the ball over again and Marcus Summerville hit a driving layup to give the Bulldogs their first lead since the beginning of the half.

“It feels good to get this win,” said Summerville. “I loved the energy our crowd brings on good days and bad days. These guys on the team motivate me. I try to stay humble and work hard.”

Senior guard Victor Alston added 16 points and had eight rebounds and six steals. The Bulldogs capped off the run at the free throw line to secure the win. The victory was their second in a row. This weekend, they return to conference play in back to back games in South Carolina against Morris College and Voorhees College.

“As a senior, it is important for me to lead by example,” said Nabors. “I wanted to make a big shot and it happened. We made all of the hustle plays at the end to secure the win. I hope this gives us a lift for the big weekend ahead.”