NASHVILLE, Tennessee – The East Nashville Magnet Eagles (21-3 overall, 10-0 District 10-0) clinched the top spot in the district as they outlasted the Stratford Spartans (8-12, 3-6) 65-60 Tuesday at Stratford. The Spartans, playing without four of their top players stayed close throughout. East took a four-point lead into the half, but the Spartans started the third quarter on an 8-1 run to take a 41-38 lead with 5:20 left in the stanza. East then went on a 6-0 run to retake the lead. Stratford matched that run scoring six straight as well. The Eagles then went on a mini 4-0 run to close the quarter with the game tied at 48. 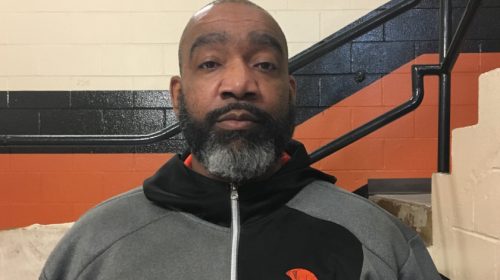 “They wouldn’t let us get away from them,” said East head coach Jim Fey. “We made mistakes and missed free throws. Their effort was better than ours.”

East took a five-point lead at 55-50 midway through the fourth quarter. A conventional three-point play by Startford senior guard Quanie Clendening (20 points) cut the lead to 55-53. The Eagles struggled from the free throw line but kept the Spartans at bay. With 50 seconds left, Eagle senior guard Caleb Grimes (19 points) blocked a three-point attempt by Greg Butler. Eagle sophomore Isaiah Jones (11 points) then split two free throws to give his team a 62-57 lead. The Spartans wouldn’t go away easy. Senior Ontario Graham (11 points) nailed a three-point shot to cut the lead to two points with 39.4 seconds left. The Eagles then could not get the inbound pass in, but Stratford missed a shot and Eagle senior Taras Carter (17 points) grabbed the rebound and split two free throws as well. Down three the Spartans had two wide open looks, but Butler and Graham missed, and the Eagles claimed their 17th straight victory.

“The kids played hard and at the end of the day that’s all you can ask of them,” said Spartan head coach Romie Reed. “I am proud of the kids that we have now. We were a made shot or two, a couple of free throws, a loose ball here or there to have a chance to win the game. You don’t take moral victories away, you want to win every game.”

The Eagles rely mostly on outside and free throw shooting. Both were not a factor as they missed 14 free throws for the game and only connected on three, three-point baskets. The Stratford game plan to stymie East’s motion offense by challenging cutters forced bad shots. Only thing missing was that final shot. After the lights were off in the gym, Graham came out of the locker and stood in the spot he missed that final shot.

“I didn’t shoot it like I am used to,” said Graham. “I can’t believe that it didn’t go in. We proved that we can play with anybody. The tournament is around the corner and we are excited.”