The chairman of a State House Subcommittee issued a letter warning his colleagues that the undermining of the legislative process by unelected bureaucrats in Tennessee is a reality.

It was as the chairman of that subcommittee that Van Huss found himself in a meeting with a department director, after which he felt compelled to issue his written warning. 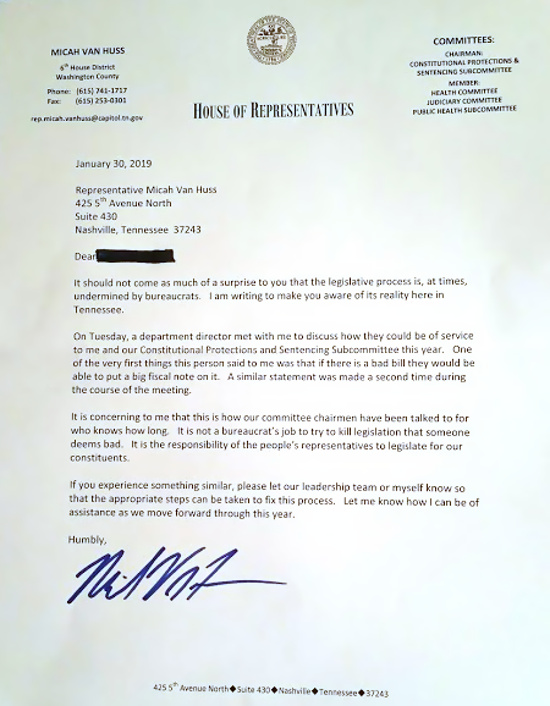 Van Huss explained, “a department director met with me to discuss how they could be of service to me and our Constitutional Protections and Sentencing Committee this year.”

“One of the very first things this person said to me was that they would be of great help this year and that if there is a bad bill they will be able to put a big fiscal note on it,” he wrote.

“During the course of the meeting,” Van Huss added, “a similar statement was made a second time.”

Van Huss chose not to mention the bureaucrat by name, but did state that it was a department director. According to the State Employee Salary Search Results page of the Transparent Tennessee website, there are approximately 300 job titles that contain “director” or “dir,” obscuring the person’s identity.

Making such a statement is quite a bold if not a risky move, because, as visitors to Representative Van Huss’s office would observe, there is a written notification that recording is in progress.

Van Huss expressed his concern “that this is how our committee chairmen have been talked to for who knows how long.”

Indeed, there has long been speculation that bills not viewed favorably with legislative leadership or the administration would then be subject to hefty costs associated with the bill’s implementation. The cost information then gets passed on as part of the research included with a bill’s fiscal note, which often has the effect of killing the legislation for lack of funding.

Van Huss himself has sponsored bills known to be viewed unfavorably particularly related to the 2nd Amendment, some more than once, that could have been the object of bureaucratic undermining.

Reinforcing the roles in the legislative process, Van Huss said, “It is the responsibility of the people’s representatives to legislate for our constituents,” adding, “It is not a bureaucrat’s job to try to kill legislation that someone deems bad.”

In closing, Van Huss advised the course of action in the event a House member has such an encounter, “If you experience something similar, please let our leadership team or myself know, so that the appropriate steps can be taken to fix this process.”

The offer made to Van Huss suggests that the practice of putting big fiscal notes on “bad bills” is one that found at least some level of acceptance with previous committee chairs, and as he stated, albeit in another context, “for who knows how long.”

However, the closing to Van Huss’s letter indicates that with the new leadership in the House, presumably referring to Speaker Glen Casada (R-Franklin), the practice will no longer be tolerated.