NASHVILLE, Tennessee – Two proposed amendments to the Constitution of The State of Tennessee easily passed the first hurdle in the Senate on Tuesday.

The Senate State and Local Government Committee voted to advance two resolutions, which is the initial step in the Constitutional Amendment process, SJR0001 by Senator Ken Yager (R-Kingston) and SJR0003 by Senator Frank Niceley (R-Strawberry Plains).

Senator Yager’s resolution will amend Article VI, Section 5 of the Tennessee Constitution such that the selection of the State’s Attorney General and Reporter would be nominated by the Supreme Court and confirmed by the General Assembly. 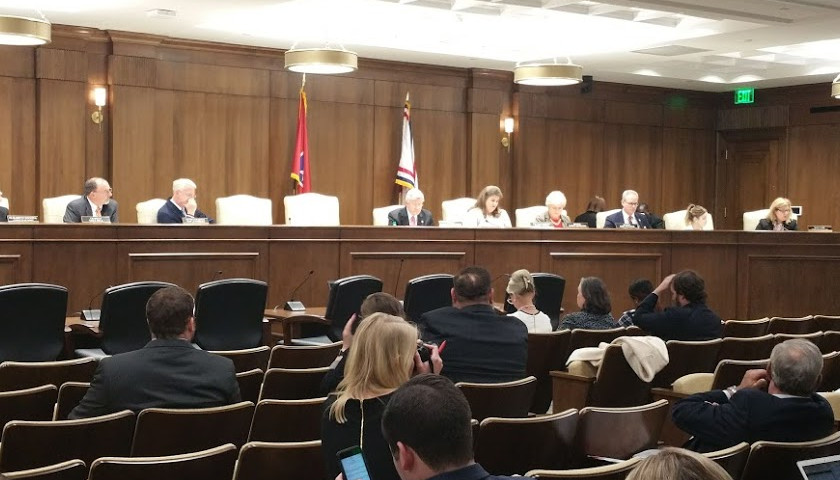 As currently provided for in the State Constitution, the Attorney General and Reporter is appointed by the judges of the Supreme Court.

As Senator Yager explained to the Committee, his Amendment would provide more transparency by having the Attorney General and Reporter nominated by the Supreme Court in an open court with a recorded vote.

Following the Supreme Court’s nomination, the Tennessee General Assembly would have 60 days to confirm. The confirmation must be in both the Senate and the House, separately and with a majority vote.

The two main points that Senator Yager made to the Senate Committee about his Amendment was that there would be more transparency to the process as well as giving the people, through the confirmation process by their elected representatives, some oversight.

In 2014, Amendment 2 removed from the State Constitution the language of Article VI, Section 3, which required that Supreme Court judges “be elected by the qualified voters of the state,” according to The Family Action Council of Tennessee. The Amendment, with nearly 1.4 million votes, passed by 61 percent, according to Ballotpedia.

The Amendment solidified a practice in place since 1995, whereby the Governor made appointments to the Supreme Court from a pool of nominees from a Judicial Selection Committee.

However, it took away the original intent of the Constitution whereby the qualified voters of the state elected the Supreme Court judges, and in turn, removed an element of accountability with the Court’s appointment of the Attorney General and Reporter.

Senator Yager’s resolution moves on to the Senate Calendar Committee, which is where his SJR0088 made it to in 2018, after failing to pass in 2017.

Senator Niceley then presented his Resolution, SJR0003, saying that the problem was mentioned to him by the late Senator Henry. Then, Senator Nicely began, as he often does, with a brief history lesson.

Up until 1949, the State operated on a state property tax collected through the counties, something Senator Niceley said he did not know.

As Senator Niceley relayed it, Governor Ford in 1949 passed the state sales tax along with a deal that, with it, all collections would go toward education and the state property tax would be done away with.

Instead of eliminating the state property tax, it was “rolled back to zero.”

Senator Niceley pointed out that a state income tax is now prohibited. The prohibition came through Amendment 3 to the Tennessee Constitution which passed in 2014 with 66 percent of a total 1.3 million votes, according to Ballotpedia. As such, a state property tax “would be the go-to place,” according to Senator Niceley.

Senator Niceley’s resolution is the first step toward allowing people to vote on prohibiting a state property tax.

The resolution passed unanimously, 9 to 0, and will go on to the Senate Finance Committee.

Each of the resolutions had a minimal fiscal note of a one-time $10,000 for publishing costs incurred by the Secretary of State.

The road to the passage of an Amendment, called out in the State’s Constitution, is a long one.

After publishing the proposed amendment at least six months prior to the election of the next General Assembly elected in 2020, it must again pass through the respective committees and full body of both the Senate and the House. Once it reaches the full Senate and House, again the Amendment must meet the three readings on three separate days requirement, but it then must pass by a two-thirds vote by each house.

The Amendment can then be submitted to the people for ratification at the next general election in which a governor is chosen, which will be in 2022. At that point, the Amendment must achieve a majority of votes cast in the gubernatorial election.