The Department of Transportation could be on the verge of approving a $3.7 billion Railroad Rehabilitation & Improvement Financing (RRIF) low-cost loan to Virgin Trains USA, owned by the $100 billion market cap SoftBank Group based in Tokyo, to build a higher-speed train project on a freight rail line in eastern Florida owned by Grupo Mexico.

The project would expand Virgin Trains USA from southeast Florida, currently operating between West Palm Beach and Miami, all the way to Orlando.  Future phases include Orlando to Tampa and up the eastern coast to Jacksonville.

The RRIF Loan would be more money than the Trump administration has received from Congress to date to build the southern border wall and that was only $1.6 billion to repair existing fencing. It would also be the largest RRIF loan in Department of Transportation history, beating out Amtrak’s $2.45 billion loan in 2016.

The Virgin Trains USA (formerly Brightline) project has been approved by the Build America Bureau (also run by the Department of Transportation) for $1.75 billion of tax-exempt private activity bonds, $600 million for phase one and $1.15 billion for phase two to Orlando.

In addition, Virgin Trains USA has an initial public offering on Nasdaq planned for Feb. 13 for another $619 million.

So, what does it need more Department of Transportation funds for? This is a multibillion project owned by the same company, SoftBank Group, which owns Sprint, even has a 30 percent stake in Alibaba and could just issue its own bonds to cover the costs of the project, were it so inclined.

This is to say nothing of Grupo Mexico which will be the other net beneficiary of the public funds as Virgin Trains USA will be paying for the right of way on the tracks. Essentially, Grupo Mexico is getting a free track out of the deal and double the freight capacity.

This is the definition of crony capitalism, where private companies that can afford to sustain themselves nonetheless come to taxpayers looking for grants or low-cost loans to mitigate their risk.  Low interest federal loans and tax-free Private Activity Bonds are taxpayer subsidized financing schemes which, if Virgin Trains USA projections are accurate, mean cash in the pockets of foreign corporations.

In the meantime, the project has not been fully vetted by the state of Florida, which does not even have state regulations governing higher-speed rail (trains going 80-125 mph), according to the Office of Program Policy Analysis and Government Accountability (OPPAGA), a research arm of the Florida legislature. The Office contracted an independent, international transportation consulting firm, CPCS, to conduct the study.

The OPPAGA study, notes the gap in regulations, stating, “While the Federal Railroad Administration and  the Florida Department of Transportation have in place regulations for conventional (up to 80mph) and high-speed (126 mph to 220 mph)rail, neither agency has developed additional regulations that are specific to higher-speed rail (81mph to 125mph).” Meaning, what Virgin Trains USA is building may not meet the safety regulations Florida ultimately comes up with. Shouldn’t Florida develop its regulations before the project is funded partially using taxpayer dollars?

Making matters worse, according to a Dec. 13, 2018 letter from U.S. Rep. Bill Posey (R-Fla.) and U.S. Rep. Brian Mast (R-Fla.) to Transportation Secretary Elaine Chao, “since the AAF-Virgin high speed train began testing and operating the South Florida portion of its line last year, ten fatalities and multiple accidents have already been reported.”  That number is now up to 14 fatalities. 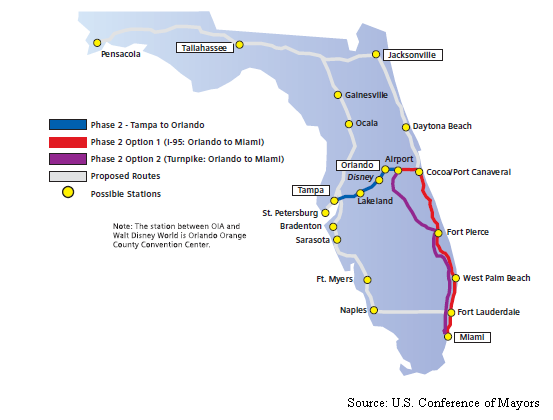 Other possible impacts to Virgin Trains USA financing include two lawsuits currently in the courts.  One group of challenges by Indian River County now at the appellate level of federal court questions the validity of the Department of Transportation approving the Private Activity Bonds and whether the National Environmental Protection Act requirements are being met.  Indian River County also has a local suit challenging Virgin Trains USA’s ability to require local taxpayers to pay for crossing upgrades and equipment maintenance for the new service.

Given the safety concerns, it’s a wonder the Florida Department of Transportation  did not fully consider an alternate route for the rail project away from densely populated areas with fewer road crossings, such as the one suggested by a 2010 Economic Development Research Group, Inc.-Siemens study on behalf of the U.S. Conference of Mayors that would have run along a coastal bypass route of the Florida Turnpike (Phase 2, Option 2).

Americans for Limited Government President Rick Manning questioned the project in a statement, asking, “Why in the world would the Trump administration even consider the largest RRIF loan in history for a project that not only endangers lives but is overwhelmingly opposed by the people who would be directly impacted by it?”

Robert Romano is the Vice President of Public Policy at Americans for Limited Government.
Photo “BrightLine” by BrightLine CC2.0.

Reprinted with permission by DailyTorch.com