The Florida Tax Credit Scholarship – which provides scholarships to eligible children to attend a private school of choice, and which is financed through corporate donations – currently has a waitlist of an estimated 13,000 families.

As the Tampa Bay Times reported, DeSantis would like those waiting students to have an immediate school choice option.

“If the taxpayer is paying for education, it’s public education,” regardless of where the student attends, DeSantis said.

[The liberal Left continue to push their radical agenda against American values. The good news is there is a solution. Find out more ]

We have parents who are lining up for a tax credit scholarship. They would not do that if the program was not succeeding. … The question for us now is, should we be satisfied there is a growing waitlist, or should we build off the successes?

He is indeed correct to want to build off the success of the Florida Tax Credit Scholarship and end the waitlist. And the announcement follows on the heels of DeSantis’ promise earlier this month to eliminate the waitlist on the state’s education savings account program, which provides those accounts to students with special needs to get a customized education.

DeSantis’ remarks underscore the need to safeguard education choice for those hoping to exercise it; namely, students on the waitlist across the Sunshine State.

Now Florida should take the next step, and make education choice universally available to every student in the state.

Florida policymakers – along with DeSantis and his newly appointed education commissioner, Richard Corcoran (another staunch supporter of school choice) – should establish universal education savings accounts available to all students in the state.

As the Fordham Institute’s Robert Pondiscio explained, Republicans control the governor’s office, the state Senate, and the state House – a “trifecta” bolstered by DeSantis’ appointment of three conservatives to the Florida Supreme Court, shifting the balance on the court from a liberal majority to a conservative-leaning court.

Although Pondiscio notes that some are wary of expanding choice too quickly, “[a]lmost without exception, every state official and school choice advocate I recently met in Florida believes the state will be the first to have ‘universal’ education savings accounts, opening private-school choice options to all who seek them,” he noted.

As Jason Bedrick of EdChoice and I recently explained, Florida’s tax credit scholarship program is benefiting some of the most disadvantaged students in the state, with participating families’ average household income being just 8.2 percent above the federal poverty line (at $25,362).

Participating students scored lower on standardized exams prior to entry into the program than their peers, yet performed up to the national average (and exceeded their demographic peers) after using a scholarship.

Moreover, on Feb. 4, the Urban Institute released an evaluation finding that tax credit scholarship students are more likely to go to college and graduate. 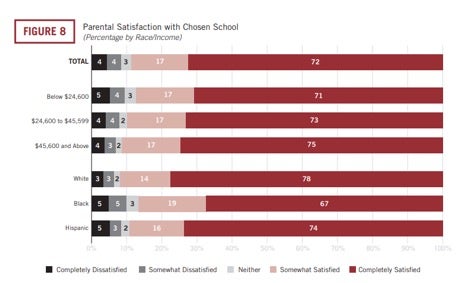 Notably, as we found in this study – currently, the largest survey ever conducted of school choice program participants – parents are seeking out things the public school system cannot or will not provide:

Parents place a high value on their child’s character development. When asked to list the top three factors that influenced their decision to have their child attend their chosen school, the only factors to be selected by a majority of scholarship parents were religious environment/instruction (66 percent) and morals/character/values instruction (52 percent).

The least important factor was standardized test scores, which only 4 percent of parents listed as one of their top three factors.

Parents in Florida want expanded education choice options. There are high levels of satisfaction among families in the current programs, high demand for more options (as evidenced by the waitlist), and the opportunity to go bold.

More than 100,000 children currently attend a school of their choice, thanks to the tax credit scholarship program, and 13,000 remain on the waitlist.

If implemented, Equal Opportunity Scholarships would give immediate school choice access to those students.

Florida should also seize this critical moment in time, as Pondiscio explains, to go bold on school choice:

Now the political stars have aligned to allow Florida Republicans – if they choose – to push the school choice agenda even further.

With the election of Gov. Ron DeSantis, a victory credited by The Wall Street Journal to African-American ‘school choice moms’ voting to protect tax credit scholarships and charter schools, choice proponents are champing at the bit to push school choice into the middle class, even making Florida the first state in the nation with universal choice.

Florida should do just that, providing education savings accounts to every child in the Sunshine State. Such a move would maintain Florida’s status as a leader in education choice, and improve educational opportunity to all families.

Lindsey M. Burke researches and writes on federal and state education issues as the Will Skillman fellow in education policy at The Heritage Foundation. Read her research.
Photos “Ron DeSantis Equal-Oppty-Scholarships” and “Governor Ron DeSantis” by the State of Florida.

Appeared at and reprinted from DailySignal.com.