Celtic Woman consists of four of the most beautiful and talented musical performers in the world. I recently sat down with all four, Máiréad Carlin, Éabha McMahon, Tara McNeill, and Megan Walsh, as they took a break from rehearsal here in Nashville. We discussed the rich history of Irish Music and their incredible heritage, as well as their latest album Celtic Woman: Ancient Land. The album’s release date was 26 October 2018. This is the group’s thirteenth studio album and eleventh DVD. On Thursday, Feb. 28, 2019, they kick off their 70-city, United States portion of a world tour in Nashville at the Tennessee Performing Arts Center’s Andrew Jackson Hall.

Celtic Woman has been together since 2005 with a different lineup over the years. They may be a household name in Ireland, but that shortchanges their appeal around the world. The global superstars are highly recognized and are probably the best known Irish musical group since U2. This version is probably the most talented. Their passion for music and their fans is contagious.

Like most of their albums, Ancient Land brings a mixture of traditional Irish songs with contemporary arrangements. This particular album was dedicated to Dave Kavanagh, one of the founders of Celtic Woman who passed away in 2018. The album was recorded in Peter Gabriel’s Real World Studios in Wiltshire, England during the summer of 2018. 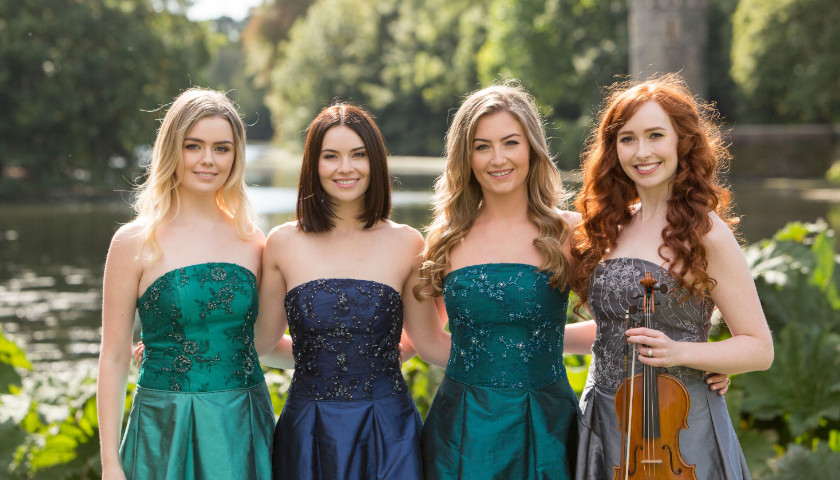 Ancient Land’s 18 songs feature material that is all new to Celtic Woman including original compositions Follow Me, Be Still, and Love & Honour (instrumental), some Irish traditional songs including Sive, Mná na hÉireann (Women of Ireland), and Moorlough Shore. The album also includes some reimagined workings of contemporary songs such as Long Journey Home, Going Home, and Homeland. Group member Éabha McMahon co-wrote one of the featured songs “Garden of Eden” which was very personal for her. She described the song as therapeutic. The concert special, which aired on PBS, was filmed at Johnstown Castle, Wexford, Ireland.

Music speaks for many of us, and the storytelling by Celtic Woman is second to none. They all share Irish heritage. Máiréad is from Derry, Éabha from Dublin, Tara from Antrim, and Megan is from Trim, Ireland. In general, members of Celtic Woman grew up with similar backgrounds and came from musical families. All were recognized for their incredible talent and pursued lessons and training. Hard work is a key ingredient for most musicians. Celtic Woman is no different.

Their love of music was evident from the opening conversation until the end. They are bringing the story of Ireland to the world stage and giving new life to ancient music. Megan Walsh said she enjoys helping people through her music. She said “Irish music pushes through the honesty and changing times. People want to feel moved, and music changes lives for the better.”

The Emerald Isle is well represented by Celtic Woman. The world owes a debt of gratitude to them for sharing their talent. The emerald thread that runs throughout the tapestry of the Irish past is alive and well with Celtic Woman. If you get an opportunity to see them live during their Ancient Land Tour, go and witness the passion of Irish Music. And I encourage you to listen to their music on your own time; it will, as Máiréad Carlin told me: “bring the hopes and passion of the Irish to the world.”