Authorities have banned left-wing activist Justin Jones from entering the Tennessee capitol in Nashville, after he allegedly threw a beverage – possibly coffee – on Tennessee Speaker of the House Glen Casada and another state legislator Thursday.

The ban, however, is apparently not permanent, at least not until Jones’ case is resolved.

On top of that, Jones may have additional legal woes.

Members of the office of Nashville District Attorney General Glenn Funk told The Tennessee Star they will review whether to revoke or increase Justin Jones’ bond from his arrest last fall. Law enforcement officers arrested Jones last October for allegedly disrupting a Marsha Blackburn rally at the Ray Stevens CabaRay Showroom in Nashville. 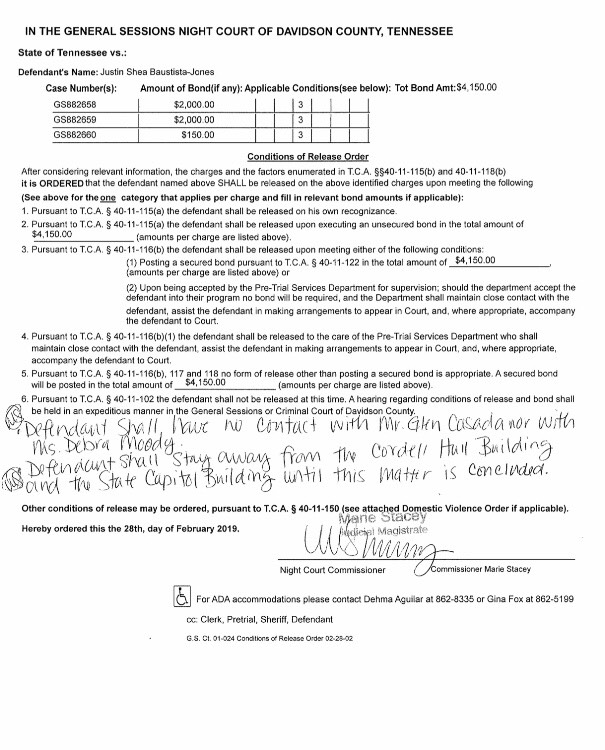 Court officials ordered Jones to have no contact with Casada or with the other legislator Jones allegedly assaulted, State Rep. Debra Moody, R-Covington.

Jones must also stay away from the state capitol building and the Cordell Hull State Office Building, whether many legislators have offices, according to court documents.

Meanwhile, Funk spokesman Steve Hayslip told The Star that members of his office are reviewing the latest developments.

Jones had a preliminary hearing scheduled for later this month for allegedly disrupting the Blackburn rally last fall, as Blackburn was running for U.S. Senate, a seat she later won.

“We’re aware of the new arrest and we’re going to review that and determine whether or not it’s appropriate to file a motion to revoke or increase the bond on the existing resisting arrest charge currently set for March 19,” Hayslip said in an emailed statement.

Jones, on his Facebook page, announced his release from jail Thursday. Jones wants Tennessee officials to remove a bust of Nathan Bedford Forrest from the state capitol.

“But as long as that racist statue and the policies it represents remain in the TN Capitol- we aren’t free,” Jones wrote. “Denounce white supremacy and the policy violence that occurs everyday in the #tnleg. And we were pushed. again. But white men in power act w/out consequence.”

As The Star reported last fall, Jones’ own words in 2016 contradict his many claims he engages only in peaceful political protest.

According to video of the event, which Jones’ grandmother posted on her personal Facebook page, Jones called upon young people to fight for liberty and justice.

“Young people and those who are young at heart, we have five words for you,” Jones said as he accepted the award.

“See you in the streets. We will disrupt. We will organize. We will shut down injustice. Know we will not normalize hatred in this country.”

Nashville Police arrested Jones in August 2017 during a vigil at Bicentennial Park to honor people killed during the Charlottesville “United the Right” rally, according to Patch.com.

Four people, including Jones, left the park and marched to the nearby First Tennessee Park, home of the Nashville Sounds, the website went on to say.

Jones and the other three people tried to enter the park after a game ended, even though cops warned them not to. One of Jones’ companions reportedly resisted arrest. That suspect reportedly had marijuana, a grinder, and a small pipe in her purse. Another of Jones’ three friends purposefully tripped a police officer and later resisted arrest, the website said.

The website went on to say Jones “was told by police not to jump in front of moving marked police cars.”

Quoting from Jones’ arrest report, the website said he “then jumped in front of a moving patrol car causing a danger to himself and the action served no legitimate purpose.”

As The Tennessee Ledger reported in a glowing piece, Jones grew up in Oakland, Calif. a city well known for producing far-left fringe protestors.

Jones came to Nashville after receiving an endowed scholarship to study social justice and activism at Fisk University, The Ledger reported.

In February 2017, The Star reported Jones was among several local left-wing activists who harassed and intimidated State Sen. Mae Beavers and her staff at their offices at the State Capitol in Nashville.