Tributes have been pouring in following the death of Bill Hobbs, former communications director for the Tennessee Republican Party, who lost his fight with cancer on Saturday.

Hobbs was also a professional photographer. His website is here. He also was a former reporter and blogger.

Jeff Hartline, executive director of the Tennessee Spotlight and vice chair of the Wilson County GOP, on Saturday paid tribute to Hobbs in his newsletter, from his unwavering conservative beliefs to his faith in Jesus.

In the process of raising three children, building a business and being engaged in the life of the Ashwood Church and its eventual move, I lost personal track of Bill. But I was aware that he had landed at the Tennessee GOP and, as Communications Director, was making Democrats in Tennessee run for cover with his groundbreaking and penetrating messaging. I suspect he was front and center when it came time to throw then Rep. Kent Williams out of the Republican Party when he colluded with House Democrats to elect him as speaker following the Republican takeover of the House after Ron Ramsey led the Republican takeover of the Senate. As many would recall, Republicans won 50 seats in 2008 and were poised to elect a Republican Speaker, Jason Mumpower. However, Republicans were stunned when Williams accepted the Democrat nomination and voted for himself, drawing the ire of the entire GOP Caucus.

After his stint with the State GOP, Bill used his quick wit, keen observation skills and superior writing skills to earn his stripes as a sought-after Consultant and Commentator in the Nashville and statewide media.

Bill married and had two children during this time and we reconnected at the newly named Woodmont Hills Church of Christ. I enjoyed our conversations about national and local policy matters. Bill continued to be active in messaging and consulting and added his love of photography to his many gifts.

When I decided to run for Congress in 2010, I could think of no better person to add to our campaign team as Communications Director than Bill Hobbs. Though criticized for doing so by the usual Leftist suspects in Nashville, I wanted the district to know that our campaign was not only revolutionary in message, but also in the people we chose to be a part of it.

I wore that as a badge of honor.

Over the last eight years, as Establishment Republicans took control of the Party, assignments for someone as conservatively outspoken as Bill Hobbs began to dry up. He turned to his love of photography and that talent began to blossom. He was chosen to photograph the entire construction of Nashville’s Tallest Skyscraper, 505 Church, by legendary Developer Tony Giarratana. Bill’s Facebook page chronicled every step of the 605 foot tall building’s construction. His keen eye focused not only on the sheer mechanical assembly, but on the men and women who poured the concrete, set the steel and finished the inside. I must admit to a little jealousy seeing his photos from the very top, looking over the entire burgeoning Nashville Downtown

It was during this time that Bill was diagnosed with colon cancer. He proceeded along a path of treatment and believed after a period of two years that he was cancer-free.

But cancer is a cruel disease and, having experienced failing strength and internal reminders of the colon cancer, Bill sought out additional medical care. Just within the past five months, he announced that he had Stage 4 Metastatic Liver Cancer.

Bill was, and is, a Tennessee Treasure.  He will be missed.

We at The Tennessee Star lost a good friend when Bill Hobbs died on Saturday at the age of 54.

Bill has been associated with The Tennessee Star since we launched in February 2017.

In fact, Bill graciously allowed us to purchase the rights to his iconic photograph of the downtown square of Franklin, Tennessee, which we have used as the profile image on our Facebook page and Twitter account for more than two years now.

Bill also free lanced as a photographer for us. Many of his photos have graced the pages of our articles, particularly of major events in Nashville, including a Donald Trump rally, several protests, and local political events.

He was a consummate professional with a keen eye and a unique ability to capture the essence of a moment.

On behalf of everyone at The Tennessee Star, I want to express my sincere condolences to his family, and especially his two children.

State Rep. Robin Smith (R-TN-26), former chairwoman of the Tennessee Republican Party (Hobbs served as party communications director when she was the chairwoman):

I met Bill during the week following my election to serve as Chairman. He interviewed for the position and we seemed to understand that the most critical element of our day was to directly reach the voter during the noise of a presidential cycle when we were working to win races at the state level.

I admired his hunger and ease at trying the new platforms of Twitter and Facebook and making those tools of communication very early in the life cycle of the digital media. The TNGOP pushed out content to voters very effectively through email, social media and video. The unidimensional communications of press releases was insufficient and the TNGOP of 2007 navigated a new path. In 2008, while other states where struggling, Tennessee flipped the majority in the TN House for the first time since Reconstruction, strengthened the majority of the TN Senate and set the table for a Republican Governor during an election cycle that had a groundswell of support for Barack Obama.

One of the remembrances that Bill would cite as an important part of his time working with the TNGOP team was related to his reading the book, Saul Alinsky’s Rules for Radicals. I brought in a shelf full of books for our staff to read that ranged from inspirational to political. I’m a big believer that if you’re a good reader and grow your own personal development, you’re a better employee. Our staff had a goal of personal development and Bill chose to read Rules for Radicals as one of his books.

This experience, according to Bill, gave him insight into the tactics of Democrats and he learned to respond accordingly. His policy knowledge, his political savvy and his talent in creatively writing were maximized by his embrace of the new platforms of media.

Bill Hobbs was a leader within the TNGOP team that “took the Hill” in 2008 and made Tennessee history. He was my friend and I’ll see him again because of his faith in Jesus Christ.

As a serving SEC member when Bill was hired at the Party, it didn’t take long to learn that he was passionate about his beliefs. He was never afraid to engage on issues of both national and state importance. Bill was a friend and definitely made his mark on Tennessee politics and it’s a tragedy to lose him. Our thoughts and prayers are with his family and friends.”

Bill Hobbs was an extraordinary thinker and influencer. Bill clearly saw the potential of social media as a political tool while most were still dismissing it as a distraction. He showed us all how to use the new medium effectively for all sorts of grassroots applications. Tennessee conservatives owe Bill a great debt of gratitude.

“Bill Hobbs was, above all, a dedicated American Patriot. He was always anxious to evangelize to anyone who would listen about the citizen’s role in keeping government within Constitutional guard rails. He was passionate about citizen activism and he was tireless in developing tools that allowed citizens to hold government and politicians accountable. We should all be humbled and inspired by the example set by Bill Hobbs. I am very honored to have known and worked with Bill.”

On Feb. 18, Hobbs launched a photographic fundraiser for his cancer treatments on his Facebook page — a photo of sand dunes in the Sangre de Cristo mountains. Showing his deep faith in Jesus, he wrote:

This is the first image for my cancer expenses fundraiser.

I have shown this one before, but now it has extra special meaning for me. It’s an image of sand dunes in the Sangre de Cristo (“Blood of Christ”) mountains in southern Colorado, and it is one of the most peaceful places on earth.

In the Bible, God promises Christians will receive a peace that surpasses all understanding – when they pray. However, many Christians may not feel they have received that kind of peace, I think because after they pray nothing has changed. Their current crisis continues. But God never promised to say yes to all of our requests.

I realize as I face life-threatening cancer for the second time, that these sand dunes, part of Great Sand Dunes National Park, are what I think of when I hear the Bible use the word peace. It is the closest I can get in my head to imagining that kind of peace.

Some day in the future after cancer has completed its work—should God choose to not save my physical life—a small group of my family and friends will gather here. They will scatter my ashes to the wind, as my soul will already be resting in heaven—experiencing the ultimate peace of eternity with God, just as God has promised to those who follow him. 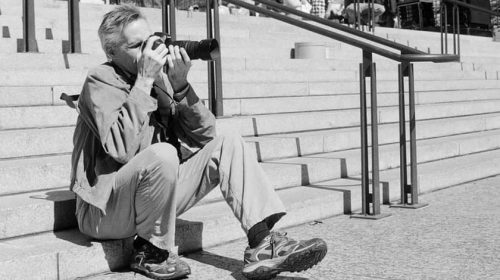 Fellow photographer Travis Batton captured Hobbs at work at the Spirit of America rally in 2017, writing

Hello Bill! I am sad to read your post. While I have not had the privilege of knowing you on a personal level, I feel like I have gotten to know part of you through your photography. I believe you can tell a lot about a photographer by seeing the world through their camera lens. I can definitely see the passion in your work. I’ve been following you on Flickr for years and finally met you in person a couple years ago while I was shooting the Spirit of America Rally in downtown Nashville. I shot this picture of you that day on Legislative Plaza. I pray that the good Lord will see you through this, and that you are back out there doing what you love! -TB

The cancer may have “completed its work,” as Hobbs wrote, but his legacy will carry on, and he is at rest with his savior.