The Pearl-Cohn Firebirds used a hot shooting night from Miquan Tucker (pictured, right) to outlast the East Nashville Magnet Eagles 71-60 in the Region 5AA championship game from Pearl-Cohn. Tucker went 10 of 17 from behind the three-point line to lead of scorers with 31 points. 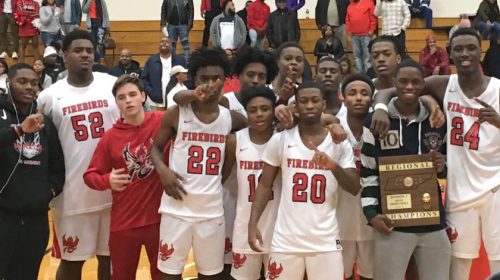 “I was shooting the ball with confidence and looking for my teammates,” said Tucker. “After winning this game, my focus is on the next game. We have to stay locked in, in practice and execute.”

Tucker scored 19 first half points to help stretch a second quarter 17-point lead with 4:21 left in the half. The Eagles closed the half on a 16-6 run to cut the lead to 30-26 on a Caleb Grimes three point shot at the buzzer.

After Pearl-Cohn junior post Tyrone Marshall (pictured, left) scored a basket to start the second half, the Eagles went on a mini 6-0 run to tie the score at 32. Marshall then took over on both ends finishing the quarter with three dunks and three blocks. The dunks all came off of pick and dive plays that forced East head coach Jim Fey to go small and take out one of his post season weapons 6’5 280-pound center Corey Stewart.

“Coach (Terry Cole) said that you aren’t a big man, you are a guard,” said Marshall. “That’s why he told me to go outside and handle the rock. We set a screen and if they come up then look for the open three if not then go to the rim. It was good to see our fans out there. That was very important.” 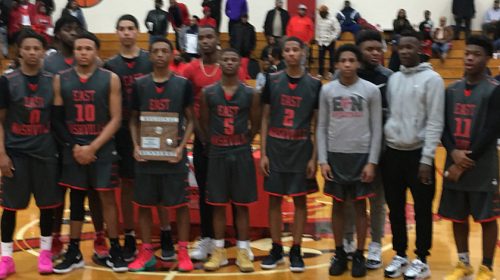 The fourth quarter started with the Firebirds going up by 11 on yet another Tucker three-point shot. East wouldn’t go away as they chipped away at the lead and cut it to two on a three-point shot by sophomore Isaiah Jones with 3:14 left. Tucker then hit a three to start a mini 5-0 run for the Firebirds 67-60 with 1:24 left. Jones hit another three to cut the lead to four but that was as close as the Eagles could get as the Firebirds scored the final seven points of the game.

“Effort is something that we always talk about,” said Firebird head coach Terry Cole. “You can’t question effort. I told them at halftime that it would be the team that came out with the most energy and effort would dictate the game. He (Tucker) was big tonight. He missed a couple of shots in the beginning but kept his confidence. He just continued to shoot, and it went in tonight. They came out in a zone, so you have to hit a couple of shots. You want to play that sub-state game at home. But that game doesn’t matter unless you win.”

On Monday, Pearl-Cohn will host Murfreesboro Central Magnet and East Nashville will travel to take on Nolensville. Both games have a 7pm tip and the winners will advance to the Class AA State Tournament at Murfreesboro.