The 26-minute in-service training video, the third in a series about cultural competency, profiles several people whom the video describes as “Williamson County Voices.”

The video does not identify anyone, nor does it make clear if these people are school system employees or county residents not formally affiliated with the school system. One man, though, identified himself as a school administrator. 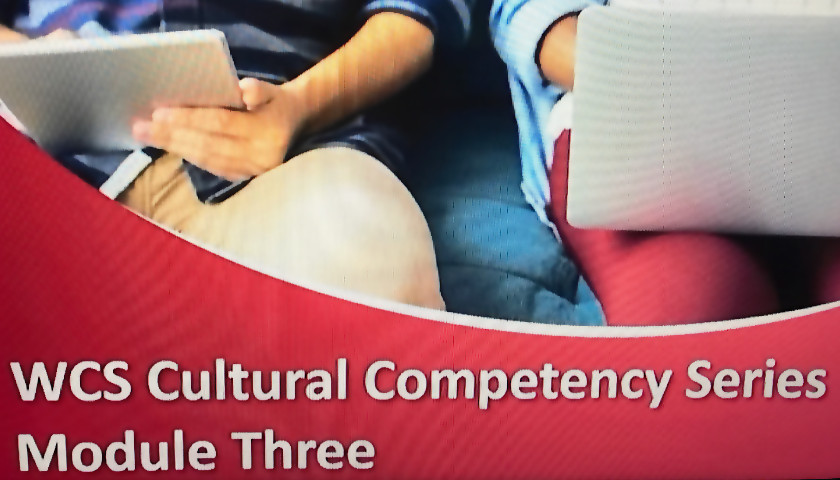 In the video, they and the narrator discuss social justice causes, the perks white males supposedly have that others do not, America’s supposed dysfunctional history, and how unfair it all is.

At the beginning, an unidentified female narrator encourages teachers to “recognize the construct of privilege and its implications.” (emphasis added)

“Our second goal is for you to have built confidence in your ability to engage in courageous conversations about privilege,” the narrator said.

“If we as educators do not build our capacity to discuss challenging topics with our colleagues then how can we teach those skills to our students?”

You can listen to that introductory segment of the in-service instructional video here:

The Tennessee Star obtained the video on Tuesday through an open records request submitted to the Williamson County School System that was submitted on February 19.

“Pursuant to Tennessee’s Public Records Act, [we are] writing to request a video shown to teachers Monday, Feb. 18, 2019, during an In-Service Day at Thompson’s Station Elementary School,” The Star wrote in an email to the Williamson County School Systems.

The Williamson County School System complied with that request by providing The Star with a CD copy of the video on Tuesday. The Star is in the process of making the full video available for its readers in YouTube format, which we expect to accomplish before the end of this week.

Subsequent to The Star’s review of the video, we requested further comments from  Williamson County School System spokeswoman Carol Birdsong, but we did not immediately receive a response to our inquires.

Late Tuesday afternoon, The Star sent this question to Amanda Armstrong, director of communications and operations in the Office of the Deputy Commissioner of Education — Teachers, Leaders, and CCTE:

Ms. Armstrong has not yet responded to that question.

All this, a week after The Star reported that two Sunset Middle School teachers in Brentwood asked their eighth-grade students to pretend their family owns slaves.

Students then had to create a list of expectations for those slaves, as The Star reported:

“We have been providing professional training to our staff members on cultural awareness this year, but I admit that we have more work to do in this area,” [Williamson County Schools director Mike] Looney said in an email sent out to school parents Thursday.

“Please know, we are absolutely committed to ensuring all of our students feel welcome, wanted and worthwhile.”

Looney also tweeted a copy of his letter.

School officials pulled the assignment, and they will not take grades on it, Looney went on to say.

In the same email, school Principal Tim Brown said he was “very remorseful that this situation occurred.”

“I recognize this assignment was inappropriate, and steps are being taken to rectify this situation,” Brown said. 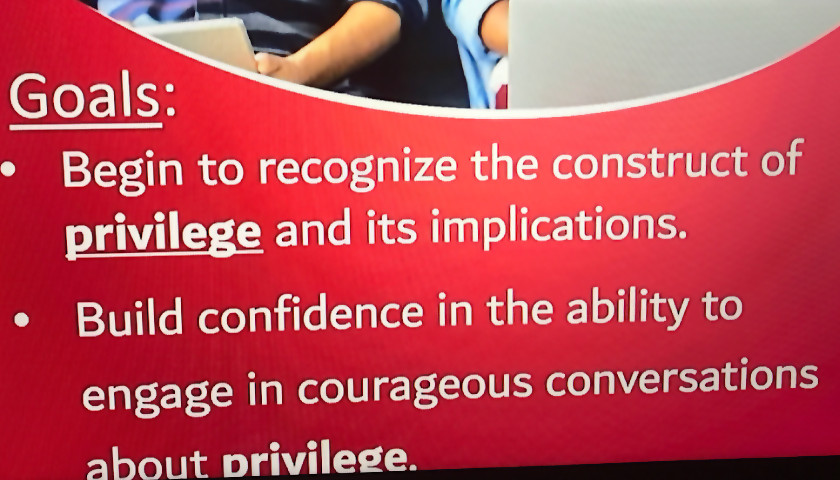 A Williamson County School System logo kicks off the video.

The Star confirmed teachers at at least one county school had to watch.

A few minutes in, a female appears and seems to go on a guilt trip about her supposed white privilege. She spoke of receiving things others have not and how she has a responsibility to share her privilege with other people.

“I’ve been ignoring how much privilege I do have. I’ve had a lot of privilege I didn’t have to ask for, or earn, or obtain,” the woman says.

“Things have been made easier for me than they have been for other people. It is my job to (a) notice that and (b) acknowledge that I was a beneficiary of that, and then (c) be a part of the solution,” she continued.

A man then opines on the flaws in the founding of the country, beginning at the 38 second mark of the audio clip below:

There are certain things that are like built in because, like, that’s how our country was founded in the sense, umm, you know it’s like this majority culture, like this, particularly white male culture has been in power for so long and it’s like, I mean, it’s hard to believe it wouldn’t be, some kind of structures in place to where, like, white men have, like, an advantage over women and over different minority groups because, you know, they’ve been in power so long, and so when I consider privilege it’s just, like I said, the fact that there’s no . . . your whiteness, for example, hasn’t been a structure that has held you back . (emphasis added) 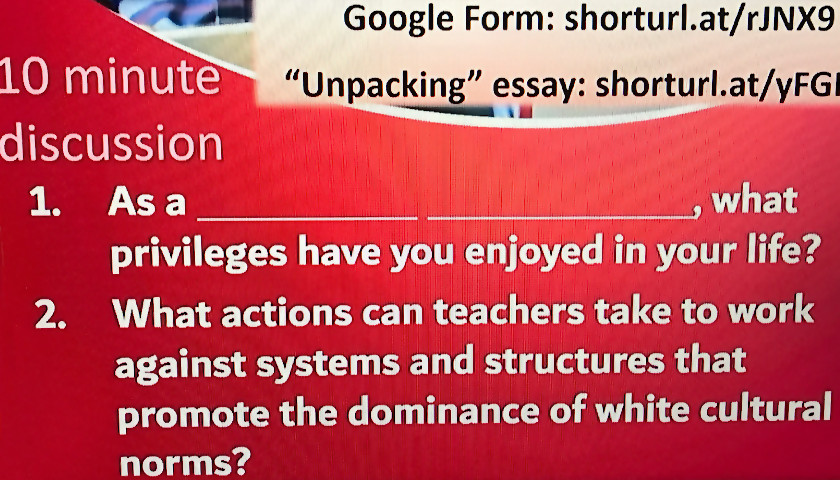 Later, the narrator told viewers “that white individuals do enjoy unearned advantages that society does not necessarily offer to individuals of color.” (emphasis added)

“The concept of intersectionality recognizes that skin color privilege is one of the many different types of privilege that can impact the way people move through the world,” the narrator continued.”

“Oppressive institutions, such as racism, classism, sexism, and homophobia are often interconnected in the varying degrees with which people hold privilege and power,” the narrator said

The video was also interactive.

At one point, for instance, the narrator asked teachers to pause the video for 10 minutes so they could assemble in groups and share what, if any, privileges they have enjoyed in their lives.

The narrator also instructed them to ask “what actions can teachers take to work against systems and structures that promote the dominance of white cultural norms?”

Other people representing a variety of genders, races, and even sexual orientations appeared on the video for what the narrator explained was a “privilege walk.”

They lined up single file facing the camera.

Someone off-camera told them, for instance, to take one step back if, while they grew up, their parents worked nights and weekends. The same person asked them to step forward, however, if they can show affection to their romantic partner in pubic without fear of ridicule or violence.

There were other similar questions:

• “If you were embarrassed about your clothes or house while growing up, take one step back.”

• “If you have ever been diagnosed as having a physical or mental illness or disability, take one step back.”

• “If you have ever been bullied or made fun of based on something you can’t change, take one step back.” 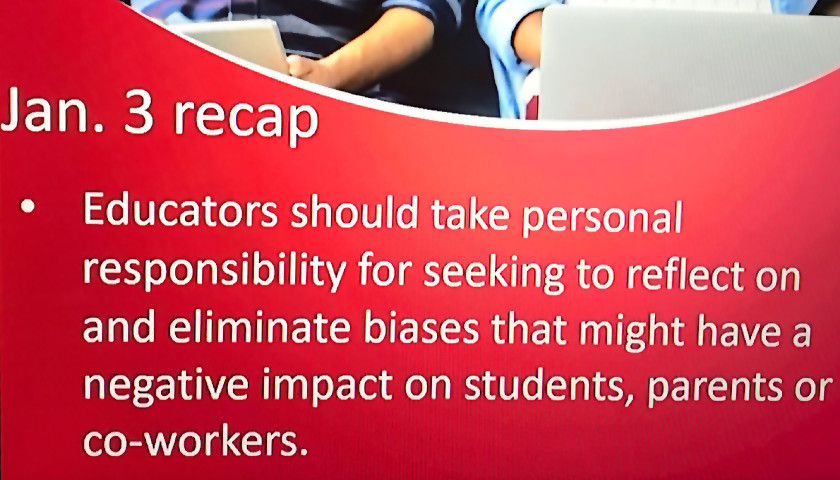 • “If you get time off for your religious holidays, take one step forward.”

At the end, an African-American man appeared on camera to speak about the “privilege walk.”

“It reminded me of when they talk about slavery in high school, and you feel angry for a few days, but then you realize this is how it is,” the unidentified man said.

Another man, this one white, said it was frustrating to see people behind him and that “no amount of hard work or even legislation can make up that gap.”

Toward the end of the video, another unnamed man said the supposed white privilege problem is a call to action.

“It starts at the top in the county and us as administrators and teachers and educators and to really make that difference and be advocates for all of our kids.”

23 Thoughts to “EXCLUSIVE: Williamson County Schools Indoctrinated Teachers on How to Teach Students About ‘White Privilege’ With In-Service Training Video”