NASHVILLE, Tennessee – In a ceremony held in the former Supreme Court chambers of the State Capitol, Governor Bill Lee signed a Proclamation honoring and commending the Nation of Israel, which was initiated by Senator Mark Pody. 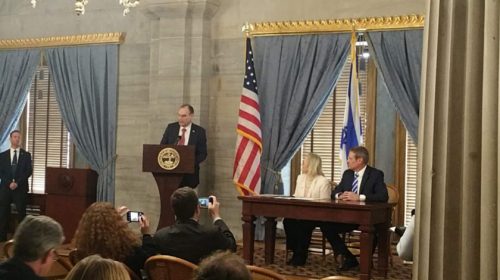 The Proclamation was originated by Senator Mark Pody (R-Lebanon) through Senate Resolution SJR 0058 introduced in January. The primary sponsor in the House was Representative Terri Lynn Weaver (R-Lancaster).

The Senate Republican Majority announced on its website that Pody’s Resolution that reaffirms Tennessee’s friendship with Israel and expresses unequivocal support for the nation, passed unanimously in February.

This, as the U.S. House has been struggling with how to deal with condemning anti-Semitism on the heels of Democratic Representative from Minnesota Ilhan Omar’s comments charging allegiance to a foreign government by those who support the nation of Israel.

Her Excellency, Judith Varnai Shorer, the Consul General of Israel to the Southeastern United States, was joined by distinguished members of the local Jewish community as well as Tennessee Governor Bill Lee and Secretary of State Tre Hargett as speakers during the ceremony.

The Star Spangled Banner was sung by Irline Mandrell, one of the Mandrell Sisters. 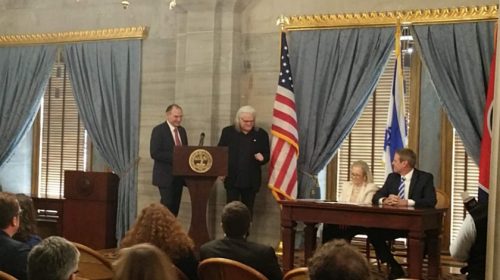 The closing prayer was offered by country and bluegrass legend Ricky Skaggs, whom Senator Pody credits for impressing upon him that this action needed to be taken.

WHEREAS, Israel has long been, and remains, America’s most reliable partner in the Middle East, with both nations bound closely by historic and cultural ties as well as by mutual interests; and

WHEREAS, the United States was the first country to recognize Israel as a state in 1948, and the first to recognize Jerusalem as the capital of Israel in 2017; and

WHEREAS, the United States participates in a high number of exchanges with Israel, to include joint military exercises, military research, and weapons development, and through the Joint Counterterrorism Group and a semiannual Strategic Dialogue, the United States and Israel have enhanced their cooperation in fighting terrorism; and

I, Randy McNally, Speaker of the Senate of the One Hundred Eleventh General Assembly of the State of Tennessee, at the request of and in conjunction with Senator Mark Pody and Representative Terri Lynn Weaver, do hereby proclaim that we honor and commend the Nation of Israel and extend Tennessee’s friendship and esteem as we remain steadfast in our support of the Nation of Israel.

Proclaimed in Nashville, Tennessee, on this the 5th day of March 2019.

One Thought to “A Proclamation In Support of Israel, Initiated by Senator Mark Pody, Signed by Governor Bill Lee”