Kelsea Ballerini was surprised on Tuesday night’s show by Opry group Little Big Town with an invitation to become an official Grand Ole  Opry member. After Ballerini performed her segment, Little Big Town took the stage to close out the show, inviting Ballerini back to perform the group’s hit “Girl Crush” with them. As the song concluded, the band changed its final lyrics to “Kelsea Ballerini, do you wanna join the Opry?” 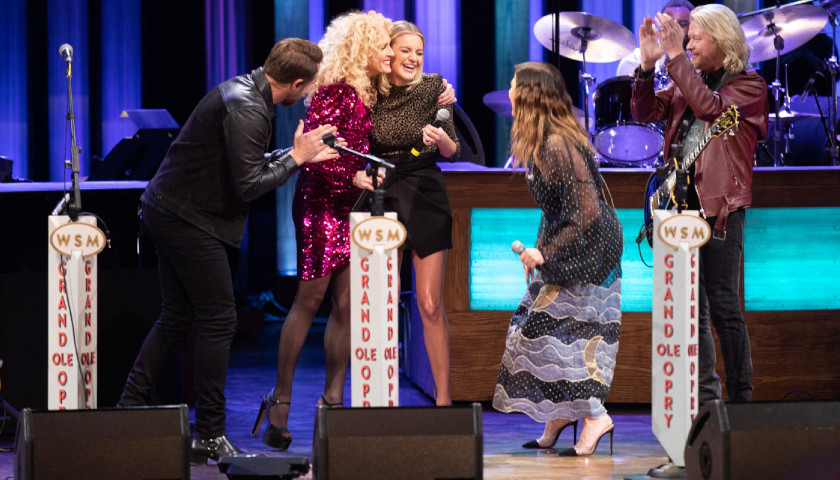 “Yes,” Ballerini exclaimed, “I’m gonna pass out I think!” Collecting her thoughts, Ballerini recalled having visited the Opry at age 13 with her mother and knowing then that she wanted to support the Opry, even if only as a fan. “To be on this stage is the greatest gift in the world,” she said. “This is the home of country music, and I get to be a part of it.”

“For the rest of your life,” Little Big Town’s Karen Fairchild added.

“We are thrilled at the thought of Kelsea Ballerini joining the Opry family,” said Opry General Manager Sally Williams. “So many of us at the Opry have been fans of her recordings, her songwriting, and her live performances since she played the Opry for the very first time. Having grown to know her personally in the years since, we love and respect her just as much as a person as an artist. We look so forward to her Opry induction in April and to all the years of great music we’ll share.

Kelsea Ballerini is a two time Grammy® nominee and is the only female artist in Country music history, including female duos and groups, to claim #1 with her first three consecutive singles; Platinum-certified, #1 smashes – “Love Me Like You Mean It,” “Dibs,” “Peter Pan,” from a debut album [GOLD-certified breakout The First Time]. Nominated for Best Country Album at the 61st Grammy Awards, her acclaimed sophomore album, Unapologetically, includes #1 hit “Legends” as a part of the original 12-track compilation all written or co-written by Ballerini. Unapologetically (Deluxe Edition) includes four new tracks including her collaboration with The Chainsmokers, “This Feeling,” which they performed during the 2018 Victoria’s Secret Fashion Show. With over 75 million streams globally, her current single “Miss Me More” is the award-winning songwriter-artists fastest rising single to date on Country radio. The Black River Entertainment artist is now supporting Kelly Clarkson’s Meaning of Life Tour, before breaking out on her own for her first-ever headline arena trek – The Miss Me More Tour with Brett Young (plus special guest Brandon Ratcliff) this spring. Visit KelseaBallerini.com and reach out to her on Facebook, Twitter, and Instagram.

Bethany Bowman is an entertainer writer for The Tennessee Star. You can follow her on Twitter and Instagram.
Photos courtesy Grand Ole Opry LLC. Chris Hollo, photographer.