She has yet to address one of the most damning reports about her campaign team’s actions during the election.

Two watchdog groups have filed ethics complaints against Ocasio-Cortez for misusing her resources as a congresswoman with the Office of Congressional Ethics, while another group filed a complaint with Federal Election Commission (FEC) alleging she and her chief of staff set up a million-dollar private slush fund. Ocasio-Cortez’s term officially began in January.

Ocasio-Cortez “improperly converted U.S. House resources to her non-official, personal use by obtaining an official ‘@mail.house.gov’ e-mail address for her boyfriend, despite the fact he was not employed by her congressional office,” the Coolidge-Reagan Foundation claimed in a complaint Thursday.

She also falsely designated her boyfriend, Riley Roberts, a “staff” member to help secure the address, the group noted. The Coolidge-Reagan Foundation’s website champions itself as a first amendment watchdog group that defends, protects and advances “liberty.”

News of the email address first appeared after political consultant Luke Thompson posted a screenshot of a House directory on Feb. 15 showing Roberts listed under “staff,” alongside the email address and the phone number for Ocasio-Cortez’s congressional office. The New York representative’s chief of staff, Saikat Chakrabarti, dismissed Thompson’s insinuation that Robert is a paid staff member.

“He’s not paid. We have no volunteers in the office. He’s not doing any government work,” Chakrabarti noted in a tweet responding to Thompson. “He can see her calendar just like spouses/partners/family members in other congressional offices. Check your damn facts before you report bullshit. Lazy journos need to learn to do their jobs.” 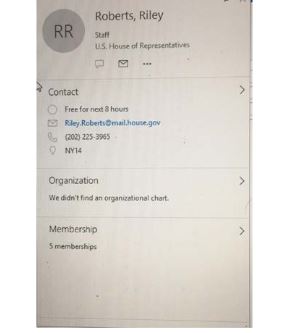 The second complaint was filed by The Foundation for Accountability and Civic Trust (FACT) Thursday and alleges Ocasio-Cortez’s political Instagram account contains direct links to her House Instagram account and includes a link for political contributions, alongside posts of official video footage on the House floor. The group claims these actions violate House ethics rules.

House ethics rules prohibit lawmakers from using official resources for political purposes, the complaint notes. The rules also forbid a member from posting a link to her official social media site on a campaign social media site. She solicited donations on the page that used the video footage, according to FACT, a nonprofit group whose past president, Matthew Whitaker, served as President Donald Trump’s acting attorney general in 2018 and 2019.

The three complaints came within days of each other. National Legal and Policy Center (NLPC), a conservative government watchdog, accused Ocasio-Cortez and Chakrabarti Tuesday of illegally funneling money between political action committees (PACs) and private companies that were both controlled by Chakrabarti.

NLPC claims the transfers from the PACs to the LLCs were part of an “extensive” plan to avoid reporting campaign expenditures to the FEC. Ocasio-Cortez, for part, denied violating campaign finance laws in response to the complaint. “There is no violation,” Ocasio-Cortez told Fox News.

But she has not yet fully responded to a Daily Caller News Foundation report Wednesday showing that both Ocasio-Cortez and her chief of staff obtained majority control over the Justice Democrats PAC in 2017, despite the fact that the PAC was credited with being the central force behind her primary victory.

She never disclosed her control over the PAC, leaving open the possibility that they could face serious criminal charges if it is found that they intentionally withheld the ties from the FEC. Ocasio-Cortez’s office has not yet responded to TheDCNF’s request for comment about FACT’s complaint.

Ocasio-Cortez’s first three months in office have stymied with various fits and starts. She’s managed to inject a lot of energy into the Democratic Party, using her high-profile social media presence to elevate new ways to tackle global warming and discuss criminal justice issues. But one of her first actions as a congresswoman was beset with problems from the get-go.

She unveiled her so-called Green New Deal resolution Feb. 2 to cheers from liberal Democrats and environmentalists, but her office was forced to make extensive clarifications after a document posted on her website appeared to contradict aspects of the actual proposal. The document on her site called for a “[b]uild out highspeed rail at a scale where air travel stops becoming necessary.”

Conservatives and Republicans took advantage of the bungled rollout, disparaging it as pie-in-the-sky and unrealistic.