The bill’s sponsor, Representative Martin Daniel (R-Knoxville) had been working the bill for weeks, which was set to culminate on Tuesday at the bill’s first stop in the House Civil Justice Subcommittee with witnesses to testify on the matter. 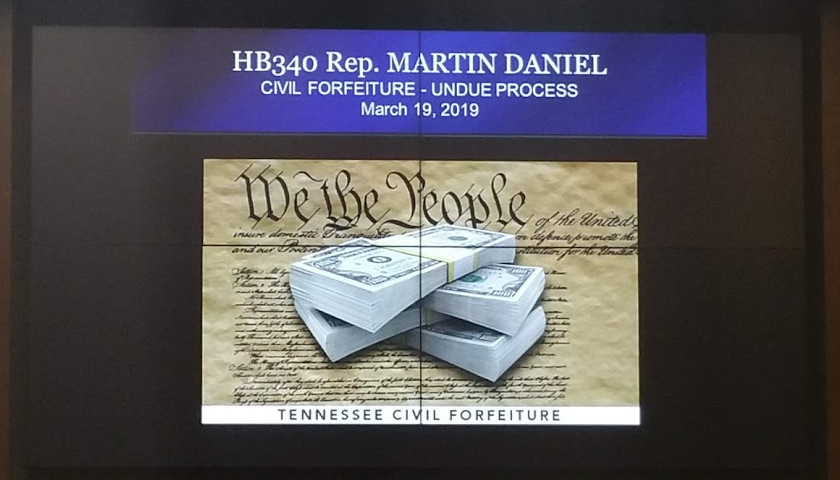 By the time the HB 0340 was set to be heard, it had 36 bipartisan co-sponsors in the House, including 14 of the 26 House Democrats.

In addition, the Nashville Metro Council approved a resolution opposing civil asset forfeiture without a criminal conviction, as reported by The Tennessee Star. The resolution was sent to the Davidson County delegation of the Tennessee General Assembly.

However, law enforcement and the Department of Safety had been lobbying hard against the bill.

This despite the concerns expressed about the “Civil Rights Implications of Tennessee’s Civil Asset Forfeiture Laws and Practices,” as reported on in February 2018 by the Tennessee Advisory Committee to the U.S. Commission on Civil Rights.

While civil asset forfeiture lacks due process, it is also otherwise constitutionally suspect.

According to the Constitution of the State of Tennessee, Article II, Section 24, “No public money shall be expended except pursuant to appropriations made by law.”

In the case of civil asset forfeiture, the seized assets of cash or other items disposed of, such as motor vehicles, are not specifically appropriated in a budget approved by the General Assembly.

The bill’s sponsor opted for summer study, which refers to the Tennessee Advisory Commission on Intergovernmental Relations, that studies and takes action on questions of organizational patterns, powers, functions and relationships among various levels of government.

Representative Daniel’s move was fully supported by the committee Chairman Mike Carter (R-Ooltewah), who hadn’t signed on to the bill as a co-sponsor, but said Representative Daniel always does such a good job with all his bills and that the issue is way too complicated to handle in 30 or 45 minute sessions.

Laura Baigert is a senior reporter at The Tennessee Star.
Photo “Martin Daniel” by Martin Daniel.