People in Williamson County this week accused two reporters at The Tennessean of having a bias that favors the “white privilege” training county school system administrators impose on teachers.

Using their personal Twitter pages as their platforms, and not The Tennessean itself, these two reporters, Elaina Sauber and Emily West, seemed to favor the “Cultural Competency” videos school system officials force teachers to watch.

These videos also preach about America’s supposed dysfunctional history. WCS teachers must watch them through an In-service training program.

What Sauber and West say about these “Cultural Competency” videos on social media matters — that’s because they both write about Williamson County for The Tennessean. 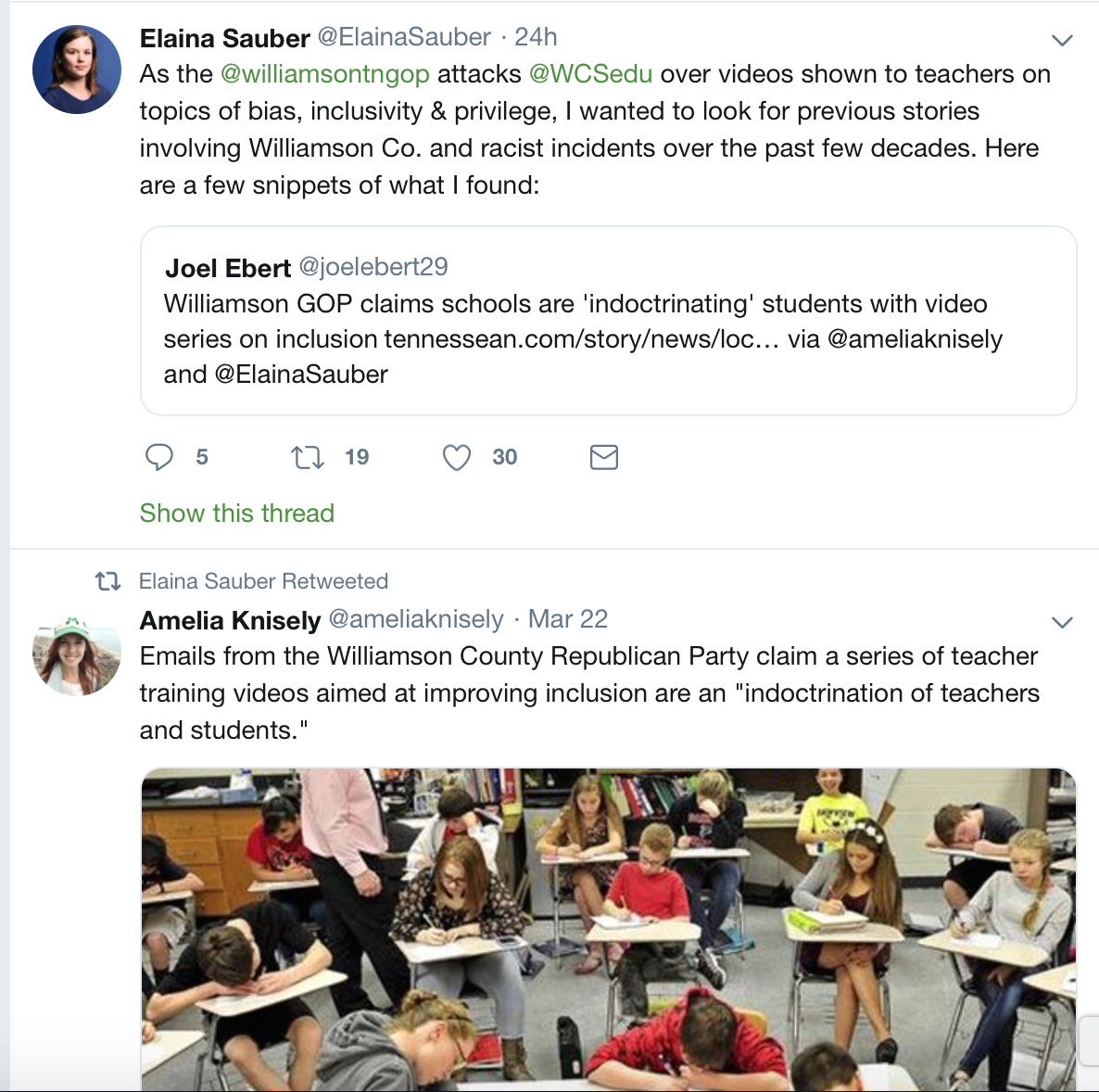 Sauber seemed to use her Twitter page to try to make the case racial tensions may still exist in Williamson County and local GOP members are wrong to criticize the “white privilege” training.

But Sauber cited racially-charged cases out of the county that are six to 20-years old.

West, using her Twitter, seemed to lecture a Williamson County parent about social justice. West also seemed to say she knows more about showing kindness than the parent does.

Saturday morning a Twitter user with the handle MorningDew was so taken aback by West’s and Sauber’s tweets he posted the following:

“Is it good journalism if it is obvious you oppose the GOP position. Why does the Tennessean have journalists covering Wilco who dislike the county? I’ve read the Tennessean for decades but this editorial onslaught is unreal.”

‘Did the @williamsontngop protest that, as well?’

To make her case that Williamson County has had and will likely continue to have racial conflict, Sauber tweeted the following:

“As the @williamsontngop attacks @WCSedu over videos shown to teachers on topics of bias, inclusivity & privilege, I wanted to look for previous stories involving Williamson Co. and racist incidents over the past few decades. Here are a few snippets of what I found,” Sauber tweeted. 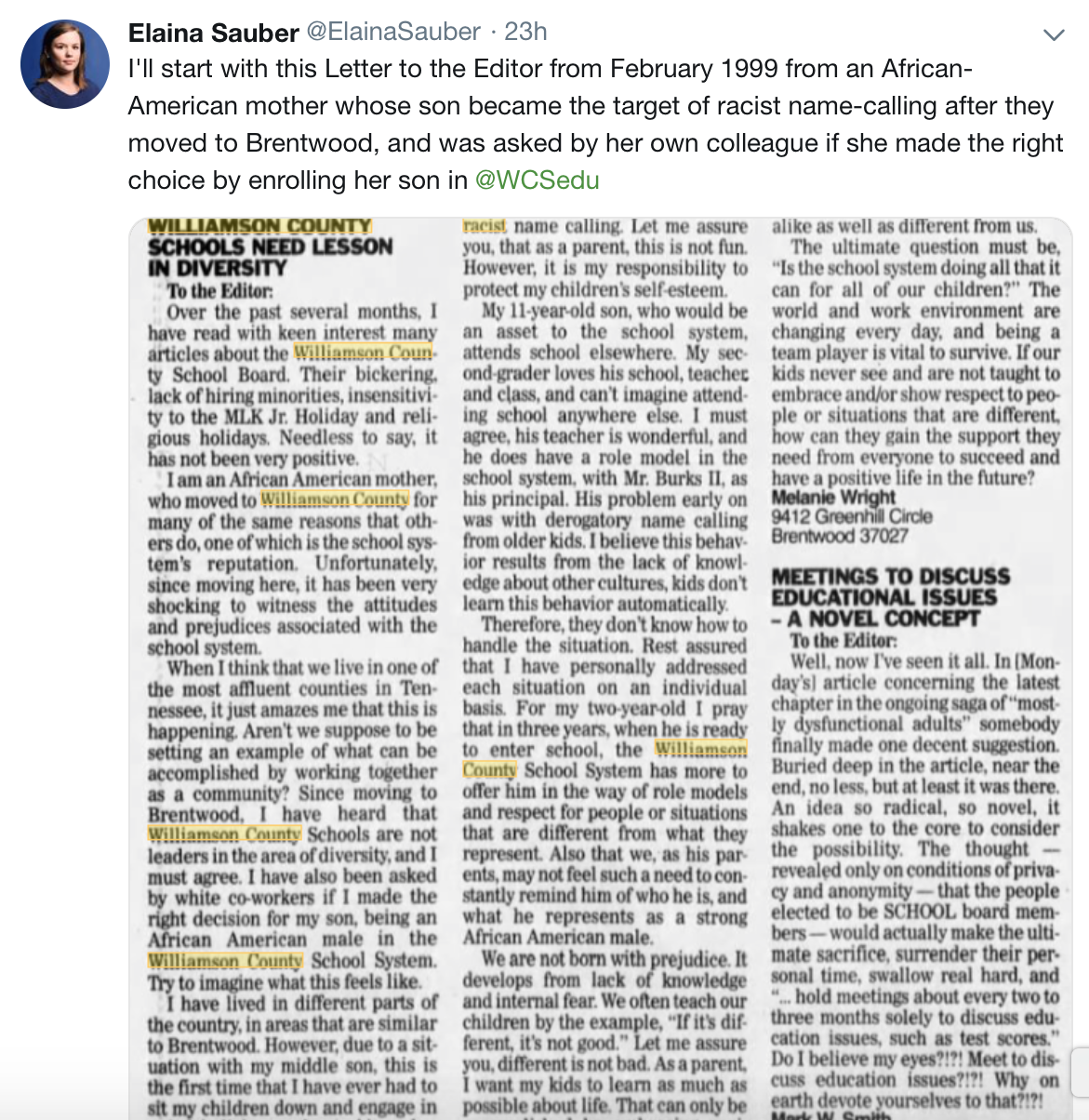 • A 1999 letter to the editor from an African-American woman who said people in Brentwood hurled “racist name-calling” at her son.

• A 1999 article about a WCS student who allegedly distributed leaflets around the county seeking new recruits for the Ku Klux Klan.

• A 2003 article about a Franklin man who burned a cross on an African-American woman’s lawn during a “drunken rage” after his son got into a fight with her son. Authorities sentenced the man to three years behind bars, but he only had to serve 90 days in jail, Sauber said.

• A 2013 lawsuit that said the WCS failed to protect an Ethiopian student from racist cyberbullying and death threats while he attended Grassland Middle School. Plaintiffs later dismissed the case with prejudice, Sauber wrote.

• The Franklin Special School District hired an outside firm in 2008 to conduct diversity training after a series of alleged racist bathroom graffiti incidents at Poplar Grove Middle School in Franklin.

Regarding the 2008 diversity training, Sauber tweeted “Did the @williamsontngop protest that, as well?”

In response, members of the Williamson County Young Republicans tweeted back:

“Did the 2008 training talk about how all white people are privileged?”

“I am a big fan of your reporting, but as a Sunset Middle mom, this seems like an unfair characterization of our schools & community. Of course we can & will do better. But these are isolated incidents over 20 yrs and not representative of WCS students and staff/culture overall,” Dunaway said.

Sauber stepped in to say “I certainly don’t think WCS’ overall culture is defined by these incidents.” But she also said “historical context is important.”

“The homework assignment at Sunset Middle last month was far from the first post-Jim Crow racist incident to happen in Williamson County & its school systems. It likely won’t be the last. The question is, what are residents & public officials going to do about it?” 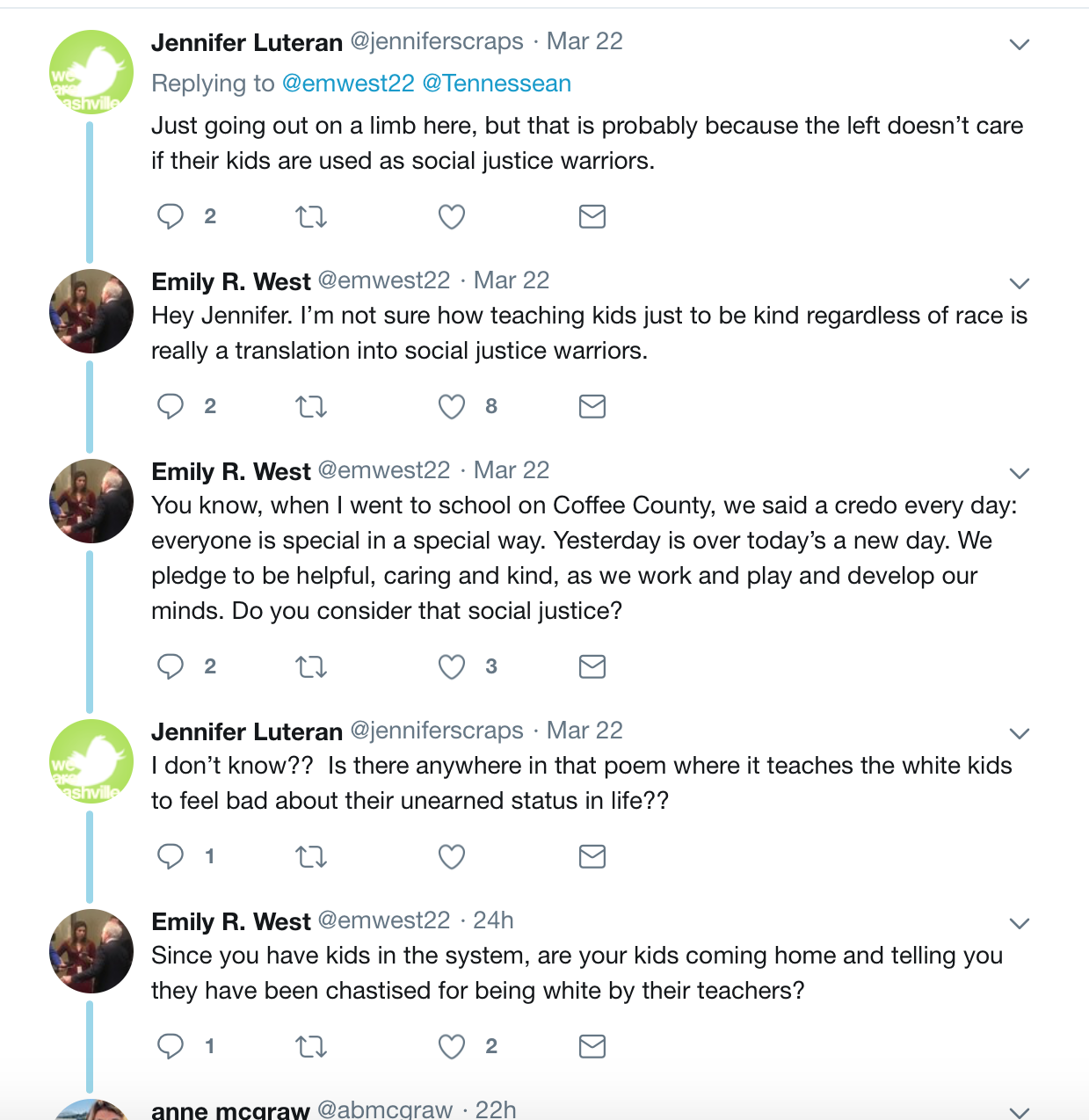 “So you have found 3 alleged school incidents since 1999 and Williamson County’s Schools are ‘Jim Crow?’ Do you even think about the words you write? Not only is it nonsense, it’s offensive and diminishes what Jim Crow actually was,” MorningDew said.

MorningDew told Sauber that all she could cite was “1 alleged incident (for) every 5 years out of thousands of students.”

On her Twitter page, West said “if you’ve been here any length of time, you know that in Williamson County only one political faction tends to have strong opinions about the school system and its school board” — apparently referencing Republicans.

Jennifer Luteran responded by saying “just going out on a limb here, but that is probably because the left doesn’t care if their kids are used as social justice warriors.”

According to The Williamson Herald, a woman named Jennifer Luteran ran for county commission in 2018. Luteran also ran for the school board in 2016.

West told Luteran she’s “not sure how teaching kids just to be kind regardless of race is really a translation into social justice warriors.” 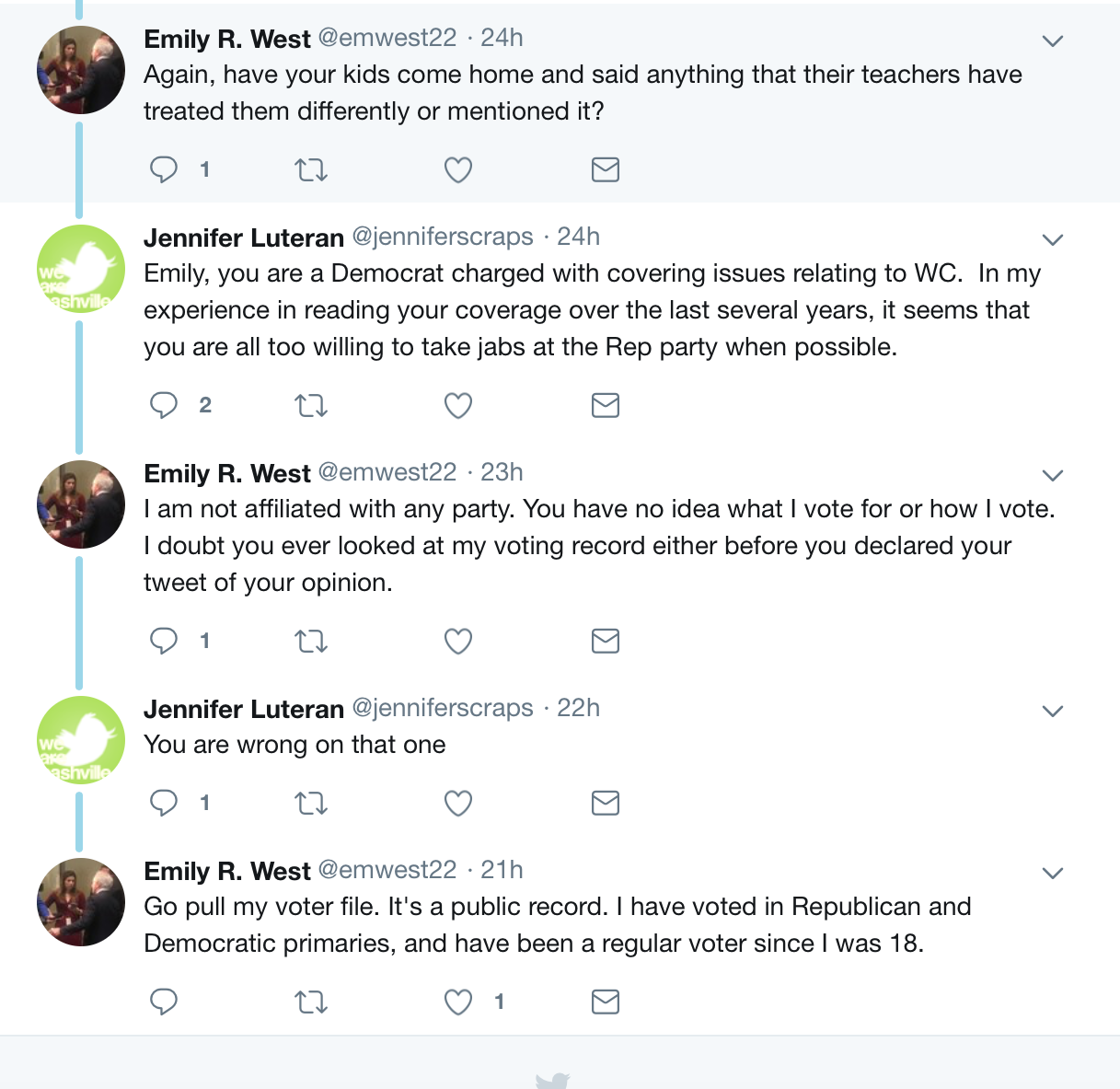 After more debate, Luteran told West she is “a Democrat charged with covering issues related to WC/” and she should meet with more WCS parents to understand their anger and look at the issue more objectively.

“In my experience in reading your coverage over the last several years, it seems that you are all too willing to take jabs at the Rep party when possible,” Luteran tweeted.

To that, West said she does not affiliate with any political party.

Luteran then told West “Don’t vilify the Republican Party as the culprit for all of the anger amongst parents. That is just not fair reporting.”

West told Luteran “Don’t vilify the reporters who wrote the original story either, which your party has done. And don’t link to the Tennessee Star, which you know is biased and not real reporfting and peddle it as fact. Im not the education reporter, but I trust the people I work with 100 percent.” 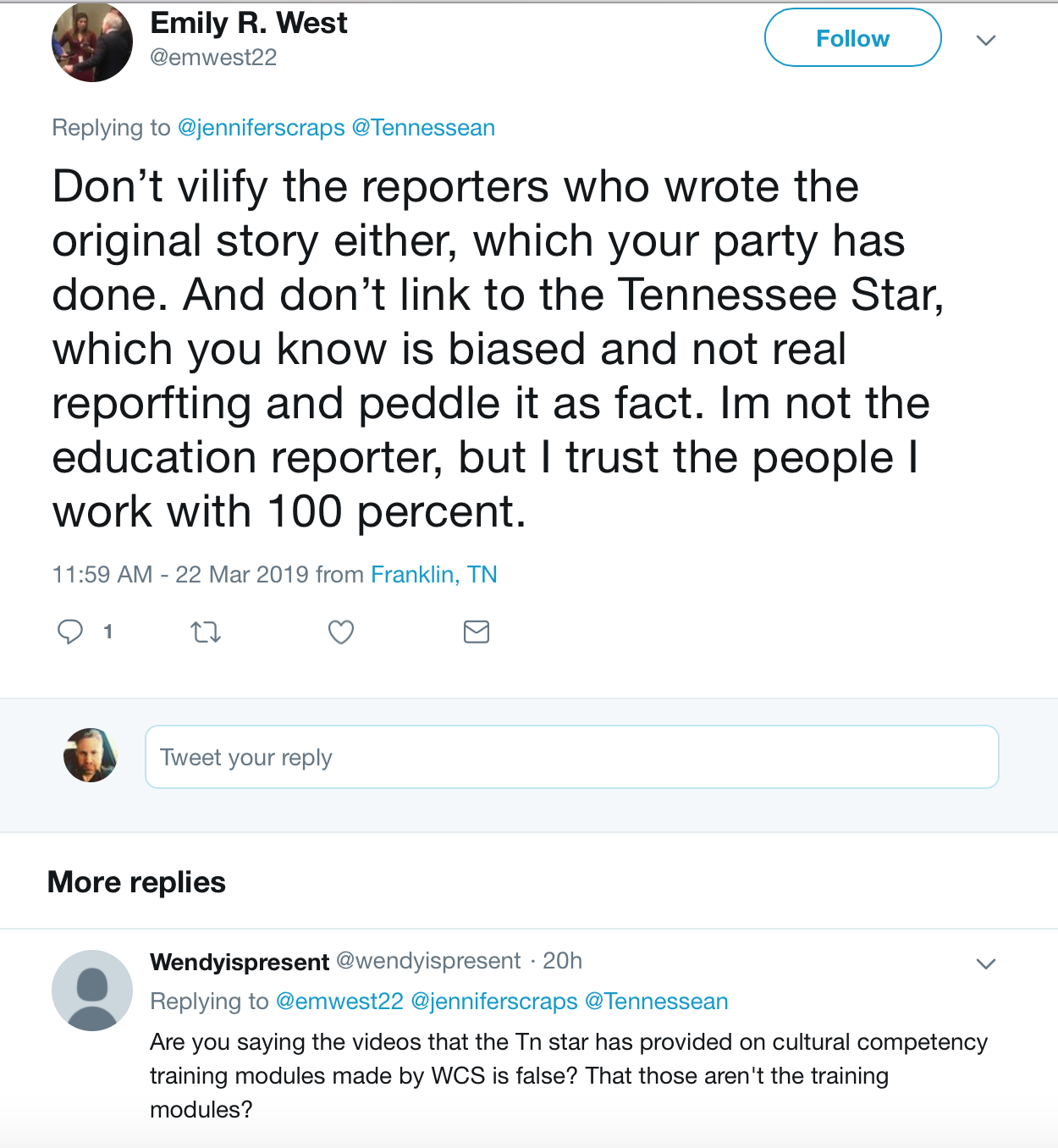 The Star was the first outlet to break the story about the “Cultural Competency” videos and has shown the first three modules on its website. To date, no one at the school system has offered evidence to refute what we have reported.

Reporters for The Star also do not bicker with Williamson County residents about this topic on social media.

As of Saturday afternoon, West has yet to reply to that question.

West’s LinkedIn profile says she has covered Franklin for The Tennessean for two years, and she worked for the Franklin Homepage for the two years preceding that.

Sauber, meanwhile, has covered Williamson County since March 2017 having come to Tennessee from West Virginia, according to her LinkedIn.