FRANKLIN, Tennessee – At a regularly-scheduled meeting of the Williamson County School Board Monday night, Superintendent Dr. Mike Looney told the board and attendees that he takes full responsibility for the development of the controversial Williamson County Schools Cultural Competency series of videos which feature the concept of “white privilege” used for in-service training.

Approximately 100 people attended the meeting, many of whom were members of the Cultural Competency Committee Looney formed in January 2018. 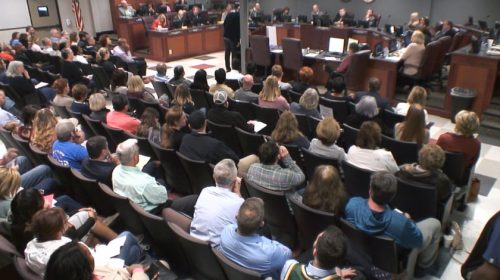 When the meeting started, it was announced that 16 people had signed up to speak, so each speaker would be allotted and timed for two minutes.

About a quarter of the speakers expressed their concerns regarding a re-zoning issue.

Five speakers, most of whom appeared to be members of the Cultural Competency Committee, stated their support for the cultural diversity efforts and said they were needed.

Four speakers, including the two women who started the WCS TN Parents Want Facts Facebook page, expressed their concerns of the messaging.

One of those women, Stefanie Rose Miles, became emotional when she said he had been called a racist for simply wanting to find answers.

Once the public comments ended, several people left the meeting, including some of those who spoke against the white privilege module of the cultural competency video series.

Unexpectedly and not appearing on the agenda, under the Superintendent’s Report, Looney addressed the issue. 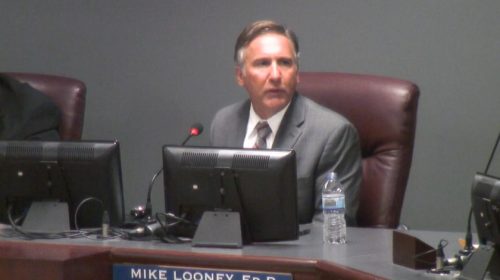 Initially, Looney expressed appreciation for the conversations that were had with school board members over the spring break via phone and face to face about the cultural competency training, that had been engaged in “really for the past two years.”

In response to concerns brought to him about how employees treat students.

In January 2018, Looney met with parents who brought concerns forward out of which he decided the work for the first year would be on social studies and dealing with issues such as slavery as an obvious choice. The curricula was brought before the Committee and they recommended changes.

In that process, several things happened that Looney did not bring forward to the Board, as they were operational in nature and helped shape the in-service training, he said.

Looney encouraged anyone with concerns to reach out to him directly and provided his email [email protected] and cell phone number 615-293-0997.

Looney said he asked Erin Caceres to create the videos, which were done using “our own staff members” at low cost and included employees sharing their perspectives with each other about these important topics.

“I’ll be the first to admit, the responsibility falls on me. I authorized them,” said Looney.

Looney continued that no board member has ever been involved in training. “What you do do is approve the plans that are submitted to the State, and they are broad and are primarily funding,” said Looney.

“The intent was not to disenfranchise anyone, but to bring us together. Despite the conflict that has ensued, I really think this is good for us,” Looney claimed.

You can watch and hear Superintendent Looney’s introductory comments about the “white privilege” training series beginning at the 30:20 mark of this YouTube video of Monday’s Williamson County Schools Board Meeting here:

As The Tennessee Star has reported, Looney’s statement on this topic is not consistent with documents provided to The Star by the Tennessee Department of Education (TDOE), which made clear that WCS did not submit a detailed plan for in-service training for approval by the TDOE, as Section 49-6-3004 of the Tennessee Code Annotated requires, but instead submitted a calendar.

Jason Golden, Deputy Superintendent/Counsel spoke briefly on compliance with Tennessee Code Annotated and told the board that by virtue of your vote in May 2018, we concluded that you are compliant with the law on the plan. “As Dr. Looney stated, it is largely related to the budget and we have not heard anything from the State that counters our conclusions.”

You can watch and hear Mr. Golden’s statements beginning at the 39:20 mark of the YouTube recording of the board meeting.

“Dr. Looney, you had actually addressed it a second ago. We had a couple of questions from board members, Dana Osbrook and I, over the past few days, most specifically regarding TCA 49-6-3004, which is the school calendar law, which also includes a requirement for approval of what we call professional development, what the law actually calls in-service days,” Golden began.

“Number one, it requires five days in-service, using that language, plus an approval of the plan,” he continued.

He then spoke directly to the WCS Board members.

“By virtue of your vote in May of 2018, we concluded you are compliant with that law on that plan,” Golden stated.

“As Dr. Looney stated, it’s largely been shown to you and been provided to you related to budget,” he noted.

Golden then claimed that the Tennessee Department of Education has not communicated with WCS about whether or not that process complied with state law.

“We have not heard anything from the state that counters our conclusions,” he concluded.

Later in the meeting, however, WCS board member Candy Emerson made it clear that she had no idea that the May 2018 vote she cast to approve the WCS calender was in any way related to approval of the Williamson County Schools Cultural Competency video series used for in-service teacher training during the 2018-2019 academic year. (beginning at the 1:10 mark of the video)

“I think one of the things that I want to say, being a board member, I was very blind-sided by Module 3 {of the Williamson County Cultural Competency video series which features the concept of ‘white privilege’],” she began

“First of all I had no knowledge, at all, of the modules, the videos, being produced,” she continued.

“I was not privy to them being done, and put in the schools, so when I started getting phone calls from my folks in District 8, my parents and teachers and citizens, I was totally caught off guard

“It could have been avoided if the board had been appropriately informed about the making of these videos, an opportunity to see them,” she continued.

“The board can’t be supportive, Dr. Looney, if we are not informed. That for me was one of the most difficult things this week, feeling like this kind of came out of the blue,” Emerson added.

“If had seen the title alone in that third module [on ‘white privilege’] I would have told you that is not a good way to start. ‘White privilege,’ it was offensive, and it set people off,” she concluded.

After Mr. Golden spoke about the WCS interpretation of Tennessee Code Annotated Section 49-6-3004, Superintendent Looney introduced Loretta Karl, who he said is in charge of the professional development processes and ensures compliance with the procedures. Karl reviewed a multi-slide PowerPoint presentation on the in-service training process.

Karl made a number of statements regarding the professional development plan for the system, as well as the process by which those plans are reviewed by the TDOE.

Her statements begin at the 40:50 mark of the YouTube recording of the board meeting.

Among the things she mentioned during her presentation were:

Several board members also made statements about the “white privilege” Williamson County Cultural Competency series, which The Star will present in future stories.

11 Thoughts to “WCS Superintendent Mike Looney: I Take Full Responsibility For The Development of The Cultural Competency Series Videos”