NASHVILLE, Tennessee – The much anticipated vote by the House Education Committee on Governor Bill Lee’s Education Savings Accounts (ESAs) proposal resulted in a huge victory on Wednesday with a 14 to 9 vote in favor of the bill. 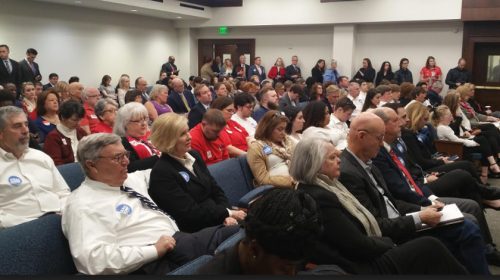 House Hearing Room I was once again standing room only, despite the early 8 a.m. start time. As with previous meetings, there were attendees wearing red signaling opposition to ESAs as well as stickers with a line drawn through the word vouchers.

This time, the room was filled with even more people obviously in favor of ESAs as evidenced by the blue “ESAs NOW” stickers they were wearing.

Chairman Mark White (R-Memphis) announced at the outset of the meeting that the ESA legislation under HB 0939 as the first item on the agenda would be delayed to 9 a.m. for the meeting that started at 8 a.m. The delay was to accommodate bill that had been rolled due to lengthy discussions on other bills the last few weeks. White also said that after hearing testimony, the committee would go back into session at 10:15 a.m. for a vote with a planned adjournment at 11 a.m.

The Chairman also said he recognized that there are a lot of viewpoints on both sides of the issue. As such, he would be running a very tight meeting, to keep the discussion limited to the bill being considered.

After Speaker Pro Tem Bill Dunn (R-Knoxville), who is carrying the legislation in the House, delivered his introduction on the bill, Chairman White invited representatives opposing the bill, Dale Lynch, Tennessee Organization of School Superintendents; Jenny Hill, Hamilton County School Board and Chattanooga CLASS; Ben Torres, Tennessee School Board Association; and Jim Wrye, Tennessee Education Association, which was followed by a question and answer period.

A new panel came forward who are proponents of the ESA measure, represented by Ryan Mahoney and Adam Peshek, ExcelinEd; Don Holwerda, Executive Director at Edusource and former President at Chattanooga Christian School; Shaka Mitchell, Tennessee State Director of American Federation for Children; and, Joi Taylor, former student at New Hope Academy and ECS in Memphis and currently working at City Leadership in Memphis, which was also followed by a question and answer period.

Most compelling was the testimony given by a young woman, Joi Taylor, whose life, as she explained, was changed by the opportunity to “break the chains of poverty,” which was given to her by her mother who gave birth to Joi at just 17 years old as well as her grandmother.

Later in the meeting, Speaker Pro Tem Dunn made note of the fact that no one asked Joi any questions, because, as he stated, she would have taken them to the wood shed.

As he did last week, Speaker Glen Casada (R-Franklin) made a strong showing in support of the legislation. This time, however, being a voting member of every committee, Casada upon coming into the room at about 10:25 a.m., took a seat in the back row of the committee members.

At this point of the meeting, there was still a lot of back and forth going on. The majority of the committee members had taken the opportunity to speak. And, while Chairman White appeared to try to be fair in letting everyone speak, Representative Antonio Parkinson (D-Memphis) tended to dominate the discussion.

As the time for the end of the meeting approached, Chairman White announced the last two to speak would be Representative Jerry Sexton (R-Bean Station) followed by Representative John DeBerry (D-Memphis).

DeBerry delivered an impassioned, if not sermon-like appeal to his fellow committee members, which would be challenging not to be moved by. Referring to himself several times as ‘just an old guy,’ DeBerry said he went to a segregated school in 1956 and later, in 1968, attended an integrated school. He sent his child as a second grader to private school, taking a second job in order to be able to do it.

DeBerry said he has 40 years of perspective that a lot of folks around here don’t seem to have.

“We’re throwing around data, while we’re locking up more kids than we’re sending to college.”

I have been in the trenches as an African-American, said DeBerry, dealing with this issue all my life.

In talking about all the changes that have come to education from desegregation to putting boys and girls together and the fears associated with them, DeBerry said education didn’t just drop from heaven, rather “We created the system.”

Speaking to the status quo, DeBerry challenged, “We have a right and a responsibility to let the system evolve. We act as if we have built this thing that cannot change, that is inalterable.”

DeBerry spoke of a voucher system he said was already in place that follows the children to private institutions. “Do you know what it’s called?” asked DeBerry, then responding, “It’s the prison system.”

DeBerry said it doesn’t seem there is a problem with that, but when it comes to a parent making that decision on their own, we don’t have any confidence in our parents.

“We act as if our parents are mo-rons, that they are crooked, that they are fraudulent and they don’t have sense enough to make a decision for their own children.”

After saying that this isn’t about President Trump, Vice President Pence or even Governor Bill Lee, DeBerry said this is about the kid who, when he graduated, couldn’t read well enough to get in the army.

“We need to get all of this stuff that sounds good, but when that door clangs behind the kid,” motioning with his arm, “who couldn’t get into school, couldn’t get in the army, who couldn’t pass the test, that’s a loss for society.”

“We cannot sustain continuing to spend the billions of dollars that we spend to lock up folks that we failed to properly educate.”

Making the point that the committee members are the lawmakers, DeBerry said, “If this bill doesn’t do what we want it to do just like everything else we do up here, let’s amend it, end it or change it. This is legislation, we choose what goes in it.”

Drawing to a close, DeBerry concluded, “I would hope that we would open our minds and have receptive hearts and give this legislation a chance.”

There was a vote to add the amendment that makes the bill, number 6637, with a previous call for a roll call vote which resulted in 16 Ayes and 8 Nays.

Speaker Pro Tem Dunn attempted to offer another amendment which he said was simply to clarify language. But, upon Representative Parkinson’s questioning if the amendment was timely filed, because he had an untimely amendment himself, Dunn opted to put the amendment on in Finance, Ways & Means.

The final vote on House Bill 0939 as amended, was 14 in favor and 9 against, with 1 present and not voting.

Between the vote on the amendment and the bill as amended, David Byrd changed his vote from a yes to a no and Kirk Haston changed from a yes to present not voting.

The bill advances to the House Government Operations Committee. The Senate has yet to schedule hearing of the companion SB 0795 by its Education Committee.

Watch the video (HB0939 begins at the one-hour mark)