Only teachers were supposed to see the videos, Looney said.

Taxpayer paid for those videos.

The Tennessee Star obtained the videos through a public records request and posted them on its website this month.

“We have not shared these videos. They were not meant for public consumption,” Looney said, adding students were not supposed to see them either.

Later, Looney told about 20 parents “the video was not meant for you, and you should not have seen the video, in my opinion.” 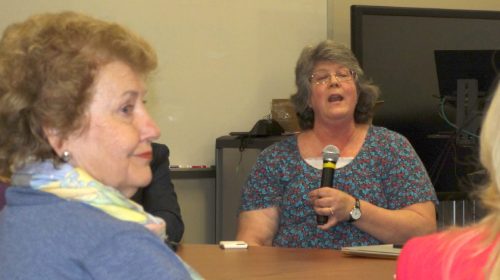 Some parents opposed the videos. Other parents supported them. Looney held the meeting at the school system’s Professional Development Center in Franklin.

Looney also told parents his decision to create a Cultural Competency Committee began after some parents complained about the school system’s choice of field trips where slavery was a topic.

The people giving the tour — and not the teachers —said insensitive things about slaves that upset African-American parents, Looney said.

A woman named Anna, who did not give her last name, was perhaps the most upset with the videos, which, thus far, have had three separate modules.

“I watched the second video, and I was appalled by the gobbledygook that I heard. That was the most ridiculous thing I have ever seen. It was talking about intersectionality and this and that and taking a step forward,” Anna said.

“God said, ‘To those who are given, much is expected.’ But, unfortunately, there are morons in this world who are racist. I happen to be married to a man who is not white, and I understand very well. For years, I tutored kids at New Hope Academy and I had Hispanic kids, white kids, African-American kids, and, as I watched that, I was appalled.”

Looney asked why the videos appalled her.

“Because the video basically said ‘You know you’re behind the eight ball already because of the color of your skin, so just try to get along the best you can, and it’ll be real hard for you because you’re not white,’” Anna said.

“It just had nothing to do with what happened on the field trips. I’ve been on those field trips many times, and I know exactly what you are saying. But you spent God knows how much money on a set of videos that didn’t make any sense. How about either not going on the field trip or meeting with the people doing the field trip? That video was pathetic. I would never want kids to see this. They would think ‘Why even try?’ 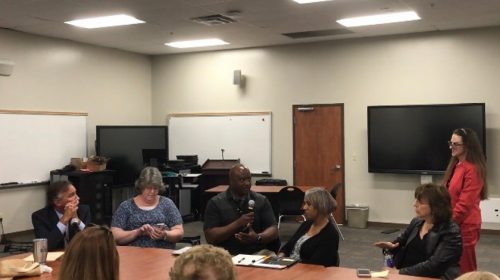 Looney told Anna the school system will no longer send students to that undisclosed venue for field trips.

That was not the only interesting exchange Looney had at the meeting.

County Commissioner Barb Sturgeon said she reacted negatively to the videos as well.

“I don’t think anyone should be forced to be shamed because they did better than other kids, for whatever reason. It’s just a negative approach,” Sturgeon said, referring to Module No. 3’s “Privilege Walk,” where some people had to step forward or backward based on their race, sex, or sexual orientation.

“I want to know who thought that was an appropriate thing to put in the video?” Sturgeon asked.

To that, Looney said he didn’t see the video before it got published.

Sturgeon then told Looney she wished he had responded to an email she sent him about the videos a few weeks ago.

To that Looney said this:

“Yeah, I thought it (the email) was antagonistic, so I chose not to respond.”

Sturgeon said the email she sent was not antagonistic.

Looney said the school system had to report 19 race, color, and national origin discrimination complaints last year, and that the numbers continue to increase.

Looney also said he wished the videos had focused on the topic of “privilege” and not “white privilege.”

Inetta Gaines, who said she has a grandchild in the school system and complained about the field trips, told parents the Cultural Competency Committee needs “tweaks that have to be done,” and that she wants it to move forward.

Other parents who came out to defend the Cultural Competency Committee, meanwhile, said they were not trying to put down any children who are of a particular color. They also said their children got left out of certain activities because of the color of their skin and they felt excluded.

An Appeal to the Media

Looney closed the 90-minute meeting saying he felt apprehensive at the start, but he felt better after talking to the parents.

“I assure all of you, regardless of where you come from, I want to do the right thing by your kids. I really do. My passion is to do right by your kids. Please stay engaged in this important topic. Be open and willing to listen to other perspectives, and I’ll commit to you let’s continue this conversation. This is really good stuff,” Looney said.

“I am thankful for your honesty and your kindness tonight. I also do want to ask the media for a favor. Please work to report accurately. I know that it’s important to sell your product, which is news, but truthful reporting is really important, and I just ask the media that what is good for the community is just honest, fair dialogue.”

Less than a minute later, The Tennessee Star approached Looney and asked for a brief interview — in the spirit of reporting accurately.

Looney immediately said ‘No’ and turned his face in the other direction.

The Star thanked Looney for his time anyway.