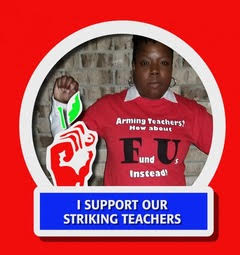 The Tennessee teacher’s union, TEA, can’t seem to get out of their own way. Not only are they out of touch politically with most Tennesseans — with opposition to gun rights, funding for abortion groups, and support for Hillary Clinton — but they have also positioned themselves far to the left of their own members. This week they went “all in” and handed control of the parental choice debate to the most radical voices in their own organization who also seem to be encouraging an illegal strike that could cost teachers who join them their jobs.

Tuesday retired teacher turned legislator Gloria Johnson (D-Knoxville) was on stage for a rally against school choice with union leaders Lauren Hopson Sorensen from Knoxville and Tikeila Rucker from Memphis.  Two of the three leaders helped form a group called TN Teachers United, and are self-described Bad Ass Teachers (BAT). Rucker even wore a controversial t-shirt to the Tuesday event with large letters F and U on the front. It is unclear, if her target was legislators or her own union leadership, which Rucker has criticized by asserting: “They’re not listening to the members.”

Rucker’s goals seem to include sparking a teacher strike. She said: “If the end result is a teacher strike, then that means that we were not heard by the individuals that have the power to make the change that’s necessary.” 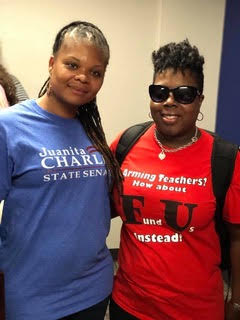 The Kentucky teachers union President, Stephanie Winkler, recently wrote to her own similarly unruly members: “Please STOP putting fear in folks who are already fearful enough!” “Your so-called ‘leading’ is doing nothing to help the kids or families in JCPS. I’m sick to death of people who don’t actually perform a job in a public school advocating for us to leave our jobs because YOU think it’s the right thing to do. Quit ramping up rhetoric that has no basis in fact.”

Sorensen, a teacher at Halls Elementary School, helped organize a protest against Governor Bill Lee on April 5th at the Knox County Republican Party’s annual Lincoln Day Dinner. This week she was “too sick” to teach, but perfectly able to make it to the Capitol in Nashville to protest. Is her employer, Knox County Schools, aware of her “illness”? Did she find a doctor willing to write her a note detailing her “sickness”?

Governor Matt Bevin in Kentucky is not tolerating the persistent “sickout” strikes of teachers in his state. Maybe Governor Bill Lee should take notes.

Former US Education Secretary Rod Paige pulled no punches in his book, The War Against Hope: How Teachers’ Unions Hurt Children, Hinder Teachers, and Endanger Public Education. Paige outlines how they went from advocates of education excellence to the radicalization by left-wing ideology. If the greatest impediment to meaningful school reform is the enormous, self-aggrandizing power wielded by the teachers’ unions as Paige suggests, then the so-called Bad Ass Teachers are the worst the union has to offer. 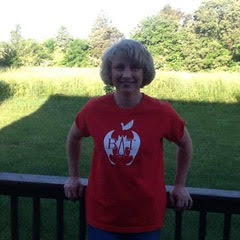 What if the state barred public employees, including teachers, from directly contributing to partisan activities from their government-issued paycheck? The state has a reasonable interest in avoiding the appearance of impropriety by banning the funding of partisan political activity of public employments.

In 2008 the U.S. Supreme Court ruled in Ysursa v. Pocatella Education Association that freedom of speech “does not confer an affirmative right to use government payroll mechanisms for the purpose of obtaining funds for expression.” The court ruled that in the absence of a free speech violation, the state had only to show a “rational basis” for banning the payroll deductions. In Ysursa, the state cited appearance of “entanglement” with political organizations was a valid reason for their ban.

Unions have long been a reliable source of campaign contributions to Democratic candidates, but their real value comes from independent expenditures and get-out-the-vote efforts. That spending comes out of dues money and is not limited to voluntary contributions to the union PAC by members. The TEA spent over half a million dollars in the 2018 election cycle.  Nationally, the teachers union spends tens of millions each election.

Why the remaining MODCONS continue to fund the Leftwing political agenda of the TEA is puzzling. If they quit in droves in a vigorous or angry manner… kind of like a “bat” out of hell…the TEA would either be forced to ideologically reboot or become even more radical — and irrelevant. Whether they know it or not, the power in the teachers union is in the MODCONS hands. They should use it if they want to save the TEA.

Steve Gill is the Political Editor of the Tennessee Star.

One Thought to “Steve Gill Commentary: ‘Like a BAT Out of Hell’”