A Conference Committee of the Tennessee legislature met on Monday to resolve a major difference between the House and Senate when it comes to community oversight boards – subpoena powers.

The bills were filed as SB 1407 and HB 0658, sponsored by Sen. Bell and Rep. Curcio, respectively. Both were members of the Conference Committee.

As reported by The Tennessee Star, the proposed legislation establishes certain requirements and restrictions for community oversight boards. The bill defines a community oversight board as a board or committee established by a local government to investigate or oversee investigations into possible law enforcement officer misconduct or the operations of an agency employing a law enforcement officer. 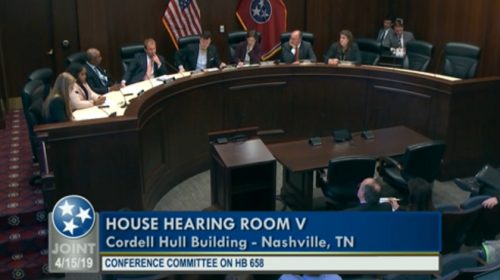 Senate amendment #1 reinstituted the bill’s prohibition of a community oversight board’s subpoena power to an independent investigator, chief of police or head of the internal affairs division of the law enforcement agency through a petition filed with a court. The court may then issue the subpoena, ordering the witness to appear and testify under oath before the investigator.

On March 28, the House “nonconcurred” with Senate amendment #1 and on April 1, the Senate refused to recede from their amendment #1.

When, once again, the House refused to recede from amendment #1, the Conference Committee was appointed.

The most recent community oversight board to be established is in Nashville, as reported by The Star, which prompted Rep. Curcio to file the bill to enact some guardrails on the boards.

Knoxville’s PARC – Police Advisory & Review Committee – has been established for more than 20 years and the Memphis CLERB – Civilian Law Enforcement Review Board – has been in place since 1994, but was inactive for a period after 2011, according to the Memphis Flyer.

While both oversight boards have subpoena power, neither has ever exercised it.

Leader Lamberth introduced the House version of a compromise, which would allow the local legislative body, usually the city council to approve a subpoena.

Rep. Curcio pointed out that in developing the compromise, they looked at current law for guidance.

Sen. Bell introduced the Senate version, which was identical to the one passed by the full body of the Senate by a vote of 27 Ayes, 4 Noes and 2 Present Not Voting.

The proposal by the House members was truly more of a compromise, because the House had been adamantly against subpoena powers.

Rep. Shaw expressed support for the House option with the subpoena approval coming from the local body, which he felt was more accessible and more connected with the community. He also said that it was a “shame” that they had to be in Conference Committee at all, because of just a “few bad apples” versus the majority of the members of law enforcement and the community.

Sen. Akbari, who was the only Conference Committee member to represent an area with an oversight board, said she supported the Senate version, but conceded that there needed to be standards so that the process would not be subject to the individual judge that could, in effect, neuter the oversight board.

After taking a voice vote on the House version where the Ayes prevailed, Chairman Curcio was advised by House staff that a roll call vote had to be taken from the members of each body.

On an initial vote, the vote by Senate members failed 1-2. The House members voted 3-0 in favor, but without a majority of the Senate members, the Committee was not in agreement.

Sen. Bell made a motion to vote on the Senate proposal, which resulted in the House members voting unanimously against and the Senate with a 2-1 vote. Once again, the Committee was not in agreement.

Sen. Bell then said, being on the prevailing side against the House proposal, he could make a motion to reconsider the House version. The vote to reconsider passed by a majority of both the Senate and House members.

Saying he preferred the Senate version and that he committed to his colleagues that he would fight for it, Sen. Bell said he did that, but the test votes revealed that the Senate version could not pass. He concluded that the goal is to get something approved that preserves the oversight board’s subpoena power.

After nearly an hour of discussion and test votes, a repeat vote on the House version resulted in a unanimous approval by the House members and 2-1 with Senate members, with only Sen. Akbari voting against the proposal.

The next step is for the Conference Committee’s report, which must be signed by all members – subpoena power of the oversight board to be approved by the local legislative body – to be passed by each Chamber of the Tennessee General Assembly.

The video of the Conference Committee can be watched here.