The theme of the event was “standing, serving, leading, together,” with an emphasis on serving. Serving is what the charity, Layman Lessons, has been doing since 2001, by procuring and distributing millions of dollars in food, as well as providing other services, to the homeless.

Layman Lessons founder, Pastor Louie Johnston, Jr., told The Tennessee Star that 375 free tickets were reserved through EventBrite, which was scheduled for 9:15 a.m. to 12 p.m. at the historic War Memorial Auditorium in downtown Nashville.

Grand Ole Opry Show Host and ABC News producer, Juliette Vara, as she does at the Grand Ole Opry, got the audience fired up for the morning event.

The program included Gary Chapman, an American contemporary Christian music singer and songwriter who is a seven-time Dove award winner and five-time Grammy nominee. Chapman played a prominent role in the event, leading the attendees in song with his guitar between each segment of the program.

Chapman said of Johnston’s request to join in the event, “I never say no to a selfless man of God.” 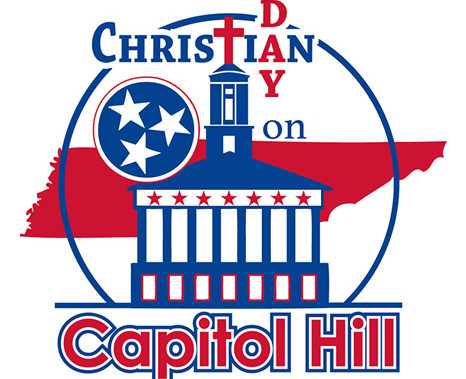 Several segments of the program included pre-recorded video which featured appearances by Moms for Tennessee founder Cecelia DeSonia, the beneficiary of a Men of Valor mentoring program, Dr. Ming Wang and Johnston himself.

Johnston’s message is that Christians have work to do by standing, serving and leading together to ensure that His agenda is done here on earth as it is in heaven. Making a point similar to that made by Governor Lee, Johnston said it’s not the job of government to do the work of Christians.

Certainly timely in what is going on in the state legislature relative to Senator Mark Pody (R-Mt. Juliet) initiating a recall of the heartbeat bill in the Senate, Johnston called abortion the deliberate mass murder of unborn children.

When Governor Bill Lee took the stage, he said he recognized a lot of people who helped him along the way, including Johnston. A man of strong faith, the Governor recognized the significance of the Easter week for Christians with what our Lord and Savior Jesus Christ did for us on the cross and what he did when he left the grave.

Governor Lee alluded to a plaque that was given to him that states, “Let the favor of the Lord our God be upon us, and establish the work of our hands upon us.” He said he has certainly received great favor and asks every day for Him to continue to give him and the citizens of Tennessee great favor.

The Governor said he was excited that just last week he announced the office of faith-based and community initiatives.

While government isn’t the answer, government can create an environment where people can address the greatest challenges of the day, said Governor Lee. He believes the church can be engaged in a greater way and elevate the conversation.

Engaging in this process is incredibly important, said Lee, acknowledging “You know that, I see the faces of people who are incredibly engaged.”

“I look forward to working with you all as we work to better the lives of every Tennessean.”

“I appreciate and covet your prayers,” and recognizing the significance of this Easter week to Christians, Lee said

“We can accomplish much because of what happened 2000 years ago this week.”

In closing, the Governor expressed his appreciation for the efforts putting him in the position and said, “I will do everything to make you proud you did that.”

Actress Jennifer O’Neill founded Hope and Healing at Hillenglade, a non-profit equine-assisted program outside Nashville for military, first responders and their families having served over 4,000 participants since 2010 in appreciation of their sacrifices.

O’Neill gave the sobering statistic that 25 veterans and first responders per day are committing suicide.

Relaying a personal story, O’Neill said her father flew a B-17 in World War II and spent two and a half years in a German prison camp, which was the inspiration for the movie The Great Escape. She made the comment, “I literally read about him in books.” O’Neill said war almost seemed romantic, because we knew who the enemy was.

She went on to marry and subsequently divorce a Vietnam War veteran who is 100 percent disabled from PTSD. They had a son together, and she has witnessed firsthand the trickle-down effect.

Comedienne Victoria Jackson entertained the crowd with her self-deprecating humor and singing accompanied by her ukulele playing. Jackson relayed her personal story of relocating to Tennessee and, in finding so many Christian references, she thought she had died and gone to heaven. She was surprised when she discovered that, in the Bible belt, there are liberals in government here.

Jackson ran for office – the lowest seat, just to get her foot in the door – which she said is very hard to do.

In closing, Jackson said that if Jesus changed the world with 12 disciplines, then, gesturing toward the audience, said that this group has a really good chance.

Congressman Mark Green (R-TN-7) gave a brief history lesson on the 1968 Tet Offensive during the Vietnam War, relating it to today’s political landscape. Green talked about three phases of an attack from initially developing a plan to the second phase of taking over the media and education to the third phase of a direct attack.

Just like the Tet Offensive where the Viet Cong switched too soon from phase two to phase three, so has the left, declared Green. People of faith are seeing the direct attack and they are not liking it.

Green said it is time for believers to stand up and defend their faith, which was received with a resounding standing ovation.

After speaking of the connection between virtue and faith, Green said it is time to be courageous and for the anti-Christian assault to be beaten back.

After the program, several attendees commented that they thought it was the best speech Green had ever delivered.
Victoria Robinson, Director of External Relations of Save The Storks gave a powerful and moving speech, starting with finding herself in an abortion clinic more than 30 years ago. For more than a decade, she felt guilt and shame.

After all, what kind of woman could take the life of her own child, questioned Robinson.

Now she has been with the pro-life movement for 20 years.

Robinson’s passion was palpable as she talked about abortions being a multi-billion-dollar industry that slaughters 3,000 babies a day – legally. There are 120 million people in the U.S. living with the ramifications of that choice because, as Robinson pointed out, there is not just one victim of abortion.

Tennessee Pastors Tommy Vallejos, Phil Corbin, Enoch Fuzz and Galen Davis each delivered a powerful, yet unique, sermon as the last segment of the program before Gary Chapman came back to the stage for a final hymn.

Johnston said he is planning a second Christian Day on the Hill in 2020, and like this year, would be held the Wednesday before Easter.