The government and immigration continue to stand apart from other issues when Americans are asked to name the most important problem facing the U.S. These two issues, mentioned in an April 1-9 poll by 23 percent and 21 percent of U.S. adults, respectively, are the only ones cited by more than one in 10 Americans, as they have been for all but one of the past 13 months. 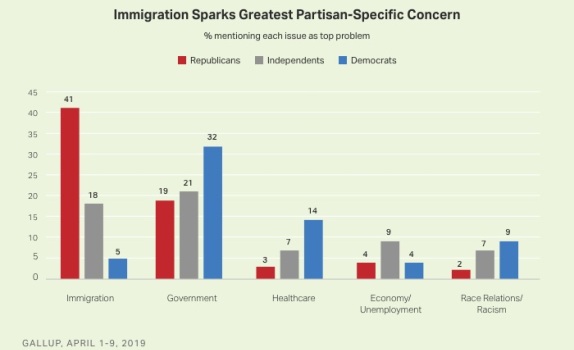 According to Gallup’s Lydia Saad, the lone exception since April 2018 in double-digit mentions outside of government and immigration occurred last November, when 11 percent of Americans named healthcare at the same time that 18 percent mentioned government and 21 percent immigration.

Today, healthcare ranks a more distant third at 7 percent, followed by race relations or racism at 6 percent. Three issues — the economy, poverty and unifying the country — tie for fifth, all mentioned by 5 percent.

Another nine issues are mentioned by at least 2 percent of Americans, including the environment/pollution/climate change at 3 percent, unemployment at 2 percent, and the gap between rich and poor at 2 percent. The full list of responses is provided through a link at the end of this article.

Immigration is currently near the high point of its historical mentions in Gallup’s trend — the peak was 22 percent recorded last July, when the separation of migrant families at the Southern U.S. border was making news. Mentions of immigration had started exceeding 10 percent routinely a few months earlier, in February 2018, but have averaged 17 percent since last August. By contrast, from 2001 through 2017, immigration mentions averaged about 5 percent.

At 23 percent, current mentions of government are down slightly from the 35 percent high mark recorded this past February, measured shortly after the conclusion of the longest government shutdown on record. Mentions of government have averaged 22 percent since President Donald Trump took office, versus 12 percent during the 12 months before that. Longer term, the government has routinely been cited by more than 10 percent of Americans as the leading problem since President Barack Obama took office in 2009, including a surge to 33 percent during a government shutdown in 2013.

While government and immigration lead the list of public concerns today, it is worth noting that the extent of these concerns is nowhere near as great as the economy has been at times of economic distress. Fewer than 10 percent of Americans have named the economy/unemployment as the nation’s leading problem since February 2018. However, that is a major change from the 2007-2009 recession and post-recession years, when these issues were often cited by more than 60 percent, as well as during and after the 2001 recession, when the combined figures rose to nearly 50 percent.

This month, 41 percent of Republicans consider immigration to be the top problem facing the country, contrasted with 18 percent of political independents and 5 percent of Democrats who say the same.

Conversely, by a narrower gap of 32 percent to 19 percent, Democrats are more likely than Republicans this month to see government as the top problem.

As Gallup has discussed previously, both parties have reason to consider the government the top problem, with a disproportionate share of Democrats citing Trump, while Republicans cite the Democrats or liberals in Congress. But a fair number of both party groups cite broader concerns about political corruption or gridlock.

Of the other top five problems mentioned as most important, healthcare and race relations/racism are more likely to be named by Democrats than Republicans. Combined economy or unemployment mentions are more likely to come from political independents than from either party group.

At a time when the economy is fairly strong and the U.S. is not involved in any major wars, it is to be expected that no single issue dominates Americans’ thinking in terms of national problems. Today, the government and immigration consistently lead, but neither prevails in the way the economy did during the last recession and post-recession periods, or as the Korean War did in the 1950s, the Vietnam War did in the 1960s, or inflation did in the 1970s. The roughly one-fifth to one-quarter mentions that today’s top problems receive is more consistent with the level seen for healthcare at its peak of concern in 2009-2010.

Although immigration is not an overriding concern for Americans generally, it is a major concern of Republicans — mirroring the high priority Republican President Trump has given the issue. While this highlights the difficulty of finding a bipartisan solution to the various aspects of the issue, it also suggests immigration will be an important election issue for Republicans, and one the president and GOP should use to drive turnout and support for Trump in 2020.

To view the poll’s complete question responses and trends click this link.