As the current legislative session races to a close, one of Governor Bill Lee’s top priorities hangs in the balance. The Education Savings Account (ESA) plan secured narrow victories in the House and Senate, with passage in the House requiring a flipped “no” to “yes” vote by Knoxville Republican Jason Zachary to break a 49-49 tie and move the bill forward. The bill now rests in the hands of a Conference Committee that is seeking to negotiate a final version that can pass both bodies.

Two key sticking points remain: how should the legislature treat home school students and should illegal aliens be afforded access to the $7300 voucher payments. The home school issue appears to be close to resolution; but the House seems adamant that taxpayer dollars should not be provided to those illegally in the country, in part because of fears that it will make Tennessee a magnet to more illegal immigration as a hundred thousand illegal aliens pour across the southern border each month.

The battle over funding education for illegal aliens has been a talking point for opponents to the Lee plan for quite some time. And despite the fact that the law REQUIRES educating these children the opposition among some House members has not diminished. Nor has the fact that the $7300 voucher payment each year will be significantly LESS than the current per pupil expenditures from taxpayers for illegal alien children already enrolled in Shelby and Davidson County schools.

Ultimately, one option for resolving the issue may be to exclude the illegal alien children as the House demands, but with a provision that should that portion of the plan be ruled illegal than the voucher plan will proceed with those children included. Such a path would give some of those wanting to show their clear opposing to illegal immigration the political cover they desire without causing the entire plan to implode. The margins in both houses are narrow, so the Conference Committee is literally threading a very tiny needle.

However, those voting against the plan in order to score political points with their constituents shouldn’t lose sight of the broader political landscape. The ESA plan is Governor Bill Lee’s top priority. To say he really wants it to pass would be an understatement. House Speaker Glen Casada is determined to pass it as well, as demonstrated by his holding the vote open for nearly an hour to swing the Zachary vote in its favor.

Tennessee leaders are not the only ones who have applied pressure on legislators as they have sought to pass the school choice plan. Education Secretary Betsy DeVos came to Nashville a month ago to promote the plan. And President Donald Trump tweeted his support for the legislation as well. 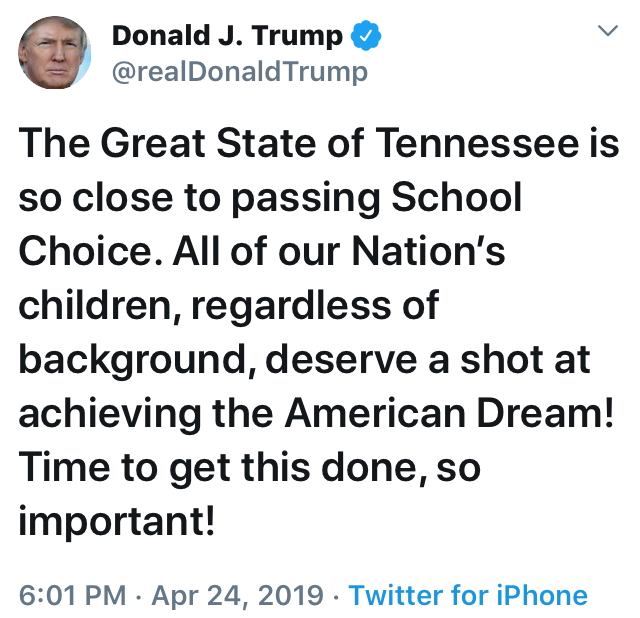 A recent Tennessee Star/Triton poll showed Governor Lee with a very high (73.5 percent) approval rating among Tennessee likely GOP Primary voters. President Trump continues to enjoy sky-high ratings among Tennessee Republicans as well, with an approval rating of 87.7 percent. Republican legislators attempting to navigate the treacherous political waters of the voucher legislation might want to keep those numbers in mind as they cast their final votes this Session.