After two very long days of Floor sessions, the State Senate and House of Representatives completed their business and adjourned from the 2019 session of the 111th General Assembly Thursday.

The Speaker of each House appointed two committees to inform the other House and the Governor that their business had been completed and they were ready to adjourn from the first regular session of the 111th General Assembly at about quarter past 7 p.m. on Thursday, May 2.

Over the course of the last two days of the session, there were long periods of recess as each chamber waited on the other to catch up or play games. 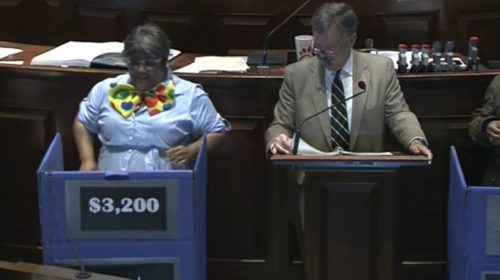 As the House was pushing to complete their business, the Senate took a break for some entertainment by way of a mock game show called “Capitol Jeopardy.”

All in good fun, five Senators dressed up as and imitated behaviors of fellow members of the Senate as they answered questions, Jeopardy style, in the categories of People, Aliases, Leadership, History, and Gen Sub.

After completing about half the board of questions, the five “actors” changed their costumes to portray another five Senators.

Sample answers and questions include:

Other delays were related to the number of Joint Conference Committees that were appointed and convened.

Joint Conference Committees can, but are not required to, include members of the minority party. 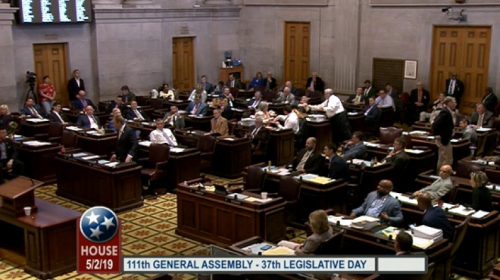 In several cases, the House Committees did not include minority members, which Minority Leader Karen Camper (D-Memphis) and other Democrats brought to the attention of Speaker Glen Casada (R-Franklin) on several occasions. At one point. Speaker Casada very gently told Leader Camper that for his first several years in the House, Republicans as the minority at that time, were not included in Conference Committees.

In apparent protest to Speaker Casada’s decision to not include a Democrat on the Committee to discuss the TennCare Block Grant legislation, most of the Democrat caucus attempted to leave the House chambers.

During their exit, there was apparently an incident involving Representative G. A. Hardaway (D-Memphis) in which Democrats claim he was assaulted, but Republicans say Hardaway pushed a State Trooper and a Sergeant-at-Arms.

With some Republicans previously excused and the Democrats who walked off the House floor, the Tennessee House of Representatives lost a Constitutionally-required quorum of two-thirds of its members.

Excused Republicans were requested to return and, as authorized, the Speaker sent for the absent members to return to the House chambers., which resulted in as many as 80 votes being cast on some of the final bills in the House.

As almost a final act, when the vote to adopt the Conference Committee Report on the TennCare Block Grant was being taken, a protestor in the House gallery began screaming and was then joined by others, which was quickly drowned out by the Speakers gavel and his repeated calls, “Out of order,” as well as the ever-present cow bell and other noises from the House floor.

The Conference Committee Report was adopted by the House with a vote of 63 Ayes, 19 Ayes and 1 Present and Not Voting. 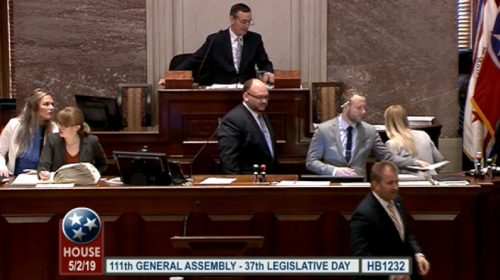 About a half hour later, once the other House and the Governor had been informed of the adjournment, Speaker Casada ordered the doors to the House chambers be closed.

After Majority Leader Lamberth and Minority Leader Camper each said a few words, Speaker Casada commented that the 2019 session was a year of many historic firsts, with Karen Camper elected Minority Leader and Chairman Lynn as the first female chair of the House Finance, Ways and Means Committee.

Casada continued, “I’m honored to be your Speaker, and honored to be in his room with you all,” which was met with a standing ovation.

The Speaker responded, “Let’s get out of here,” with a hint of emotion in his voice and a gleam of tears in his eyes.

Leader Lamberth responded to the Speaker that he only made them stop clapping because you might have cried just a little bit there.

In accordance with The Constitution of the State of Tennessee, Article II, Section 8, the Tennessee General Assembly stands in adjournment until noon on Tuesday, January 14, 2020.