Nashville residents who oppose a proposed plan to privatize parking have upped their game and have released a new YouTube video to encourage people to protest.

Nashville resident David F. Roberts said in an emailed statement that the video is part of a digital ad campaign to get his neighbors active on this issue.

In the video, Nashville resident Mike Johnson warns that everyone needs to learn about what Democratic Mayor David Briley and members of the Nashville Metro Council “are trying to rush forward that will cost us a lot of money.”

“In their latest crazy scheme, they want to take away free parking. They want to raise the price to park citywide by 20 percent. They want to double the cost of parking fines, and they want to add up to 5,000 new parking meters to charge more people more money for parking in our own neighborhoods. We were having dinner the other night with some friends, and I saw this parking meter scam come up on the news. When the reporter explained that the city is about to sell a 30-year contract selling our parking assets to an out-of-state company it just got me fuming, and I had to do something,” Johnson said.

“Together, a handful of us have worked to send thousands of letters to our friends and neighbors, and we’re trying to alert them that they better speak up against this bad parking meter deal before the council votes and before it’s too late. My message to the community is simple. If you don’t think our city government should cash in on decades worth of long-term income just to pay off this one-year’s overspending, and if you don’t think the city government should be taking even more money out of our pockets and if you don’t think that you should have to pay for parking on your own street, then you need to tell the mayor and your councilmen to stop this foolish plan. Ya gotta stop it, before it’s too late.” 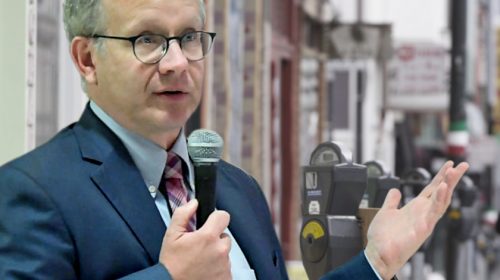 As The Tennessee Star reported last week, these residents say city officials are rushing through the plan so they can get more money out of people’s wallets and help cover their past mistakes.

Roberts said the plan will take away free parking, raise prices, and give an unaccountable, for-profit company police-like powers to issue tickets and fines against Nashvillians.”

“This long-term contract would pay for the amount Mayor Briley and our elected Councilmen overspent the budget THIS fiscal year. Think about that—we’ll have to pay new costs for one third of a century to make up for one year of bad choices by them,” Roberts wrote.

“Under the new parking contract, Mayor Briley’s lack of responsibility is going to come right out of OUR paychecks. That’s not right,” Roberts wrote.

As the Nashville-based News Channel 5 reported, Briley intends “to award LAZ Parking a contract to privatize metered parking. It is a 30-year contract that would generate $300 million for the city.”