There is no verifiable evidence so far that will confirm the recent NewsChannel 5 report that claimed the “FBI investigates controversial voucher vote.”

“NewsChannel 5 has learned that agents are interested in discovering whether anything of value – such as campaign contributions – were offered by anyone in return for votes,” the NewsChannel 5 report continued. (emphasis added)

However, the NewsChannel 5 story fails to identify any sources upon which it relied to make these bold assertions about a purported FBI investigation into “whether any improper incentives were offered to pass Gov. Bill Lee’s school vouchers bill.” The story simply states “NewsChannel 5 Investigates has learned,” and “NewsChannel 5 has learned.”

The NewsChannel 5 story implies knowledge that could only come from the FBI itself or from Tennessee lawmakers purportedly “interviewed” by “FBI agents . . . about whether whether any improper incentives were offered to pass Gov. Bill Lee’s school vouchers bill.”

But, as is standard process, the FBI has neither confirmed nor denied that any such investigation is under way.

Elizabeth Clement-Webb, Public Affairs Officer at the FBI’s Memphis field office, told The Star that the FBI could not confirm nor deny an investigation, as NewsChannel 5 also reported.

The NewsChannel 5 story fails to identify by name a single Tennessee lawmaker who confirms he or she has been interviewed by the FBI “about whether any improper incentives were offered to pass Gov. Bill Lee’s school vouchers bill.”

As reported by The Tennessee Star, State Representative Jason Zachary (R-Knoxville) confirmed that he had not been contacted by the FBI and found it “ridiculous that a story is run on a rumor with absolutely zero basis of truth.”

Representative Zachary would seemingly be an early point of contact in any investigation into alleged “improper incentives offered to passe Gov. Bill Lee’s school voucher bill,” given that his was the vote that broke the 49-49 tie, after his home county of Knox was removed from the measure, when the Education Savings Accounts legislation was heard on the House floor April 23.

Representative Zachary also told The Star last Friday that none of the 10 to 12 legislators he had been in contact with over the previous day had been contacted by the FBI either.

David Boling, Public Information Officer for the U.S. Attorney’s Offices, Middle District of Tennessee, told The Star that the Office was not in receipt of any letter requesting an investigation into alleged “improper incentives . . . offered to pass Gov. Bill Lee’s school vouchers bill.” Mr. Boling also said that neither the U.S. Attorney’s Offices nor the FBI could confirm nor deny if an investigation were underway.

However, Mr. Boling did confirm that the U.S. Attorney’s Office was in receipt of a letter from Minority Leader Mike Stewart (D-Nashville) that was received and forwarded to the FBI last Wednesday.

Last Wednesday was May 8, the date of this letter from Stewart, written in his capacity as head of the House Democratic Caucus, which requested the U.S. Attorney’s Office conduct an investigation into alleged unauthorized surveillance in the Cordell Hull Building. You can see a copy of that letter here: 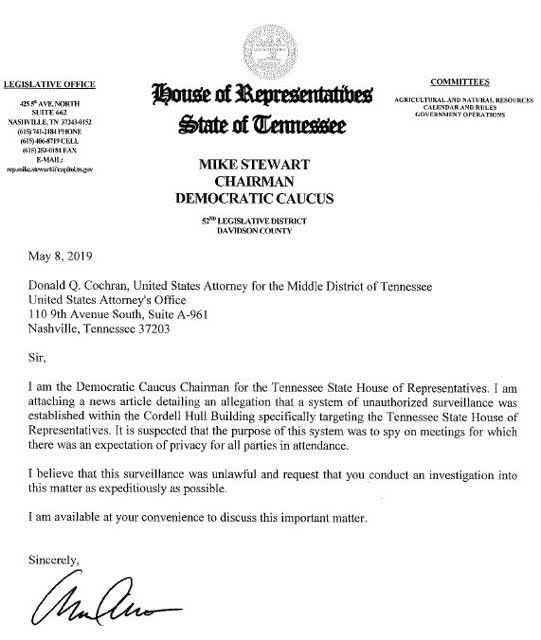 Rep. Stewart did not immediately respond to an inquiry from The Star as to whether he also requested an investigation by the FBI regarding irregularities into the Education Savings Account legislation vote in the House.

Sources familiar with the operations of the FBI tell The Star that it is routine practice for the the Department of Justice and local U.S. Attorneys to refer requests for investigation to local FBI offices, but that the fact that such a referral has taken place is not confirmation that the FBI has begun either a preliminary investigation or full investigation into the topic identified in the letter.

Typically, the FBI will conduct an assessment, which will last at least 30 days, before determining whether to move forward to a preliminary investigation.