House Speaker Glen Casada (R-Franklin) came out swinging against claims that he tried to “rig and predetermine” the outcome of his request for an advisory opinion by the House Ethics Committee, calling it the “most maddening allegation made to date.”

The charge was made by House Ethics Committee member Mike Carter (R-Ooltewah) in a three-page statement dated May 17, addressed to Republican Caucus for the House of Representatives, State of Tennessee. “Based on the facts that I now know,” Carter then called for the resignation of Speaker Casada.

According to the news report, Carter first provided his statement to Times Free Press prior to sending it to the GOP Caucus.

Carter’s release of his statement was the first step in what has developed into an unusually public back and forth between him and Casada.

In Carter’s original statement, he described the events surrounding an advisory opinion presented for his approval and signature, which included being presented with a statement of facts in the 9th floor Legislative Legal Services Offices of the Cordell Hull Building.

While Carter didn’t name who was in the room, referring to them only as “those present,” television news reports trying to cover the meeting showed Chairman of the House Ethics Committee Matthew Hill (R-Jonesborough) and at least one attorney was present.

An addendum to Carter’s statement in as much said that Hill was at the meeting, “My statement wasn’t meant to include Chairman Hill. He made me feel comfortable and acted with professionalism and integrity. Nothing I said should be taken to reflect poorly on Chairman Hill. I apologize to Chairman Hill if my letter was construed in any way as negative towards him.”

Carter discussed his apprehension with signing the advisory opinion, but after “considering the entire situation, I decided I would sign the advisory opinion if I could modify that opinion to clearly state that the facts upon which the opinion was rendered appear to be divergent from the facts in the public record.”

Carter clarified, “I advised that I would sign the opinion if I was allowed to write the final paragraph and attach this letter of facts to the opinion as exhibit A.”

That appeared to be the agreed upon plan of action, as Carter further stated, “I understood my request would be honored and that I should go and develop that language and bring it to the 1:30 (Monday) meeting with the full committee.”

The meeting with the full House Ethics Committee scheduled for 1:30 p.m. that same day was later cancelled, due to insufficient meeting notice.

It is unclear from Carter’s statement where the plan for his development of language for the final paragraph went awry and turned in to his call for Casada’s resignation for “attempting to pre-determine an opinion from the Ethics Committee” as being the final straw for him.

Casada vehemently denied the “most maddening allegation made to date,” adding, “I have done absolutely nothing to influence any work of the Ethics Committee. Period.”

In addition to the sexist and racist text messages Casada was engaged in or copied on with his former Chief of Staff Cade Cothren and another former staffer from 2016, allegations have been made that an email was manipulated to frame left-wing activist Justin Jones who has been legally charged with assaulting Casada, surveillance of House committee rooms, wrongdoing relative to the vote on the Education Savings Accounts legislation, and the most recent claim that political ads during the 2018 re-election campaign for Representative David Byrd (R-Waynesboro) did not properly identify that they were paid for by Casada’s political action committee.

Casada made his own charge that Carter’s letter “is nothing more than a deliberate attempt to mislead and an absolute disgrace from someone that should know better.”

Carter’s response, “I’m not lying and Matthew Hill knows it.” Carter also reportedly said that the attorneys present know it as well, even if he is not sure they can be made to testify to that.

Casada thought that a conversation between he and Carter would have been in order, saying “At the very least, he should have had the decency to call me first.”

In his email rebuttal addressed to “Members,” Casada lifted a paragraph from the letter “submitted to each and every one of you from Representative Mike Carter.”

Casada stated, “I copy and paste it so you can read it and understand this is another example of absolute fiction being perpetuated as fact.” 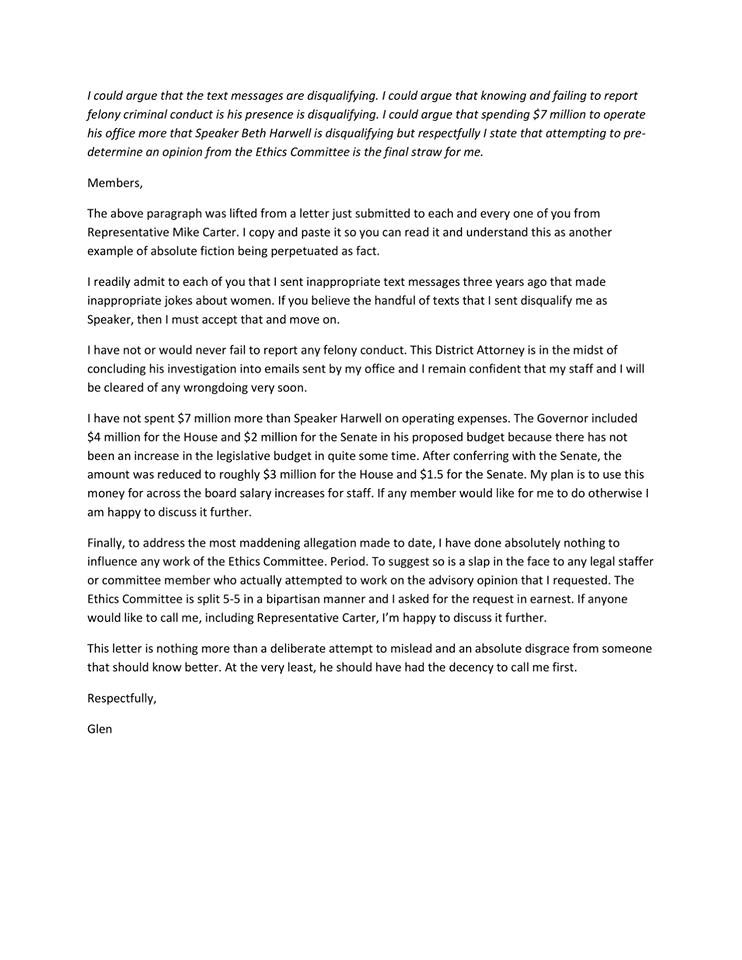 Addressing the claims in Carter’s quoted paragraph, Casada admitted to his text transgressions, “I readily admit to each of you that I sent inappropriate text messages three years ago that made inappropriate jokes about women.”

Perhaps a preview of his approach during the closed Monday House Republican Caucus meeting and the only substantiated allegation at this point, Casada said, “If you believe the handful of texts that I sent disqualify me as Speaker, then I must accept that and move on.”

Casada then addressed Carter’s next argument about reporting felony conduct, although there may be a difference in opinion of the specific felony conduct.  Carter seemed to allude to the use of cocaine by Cade Cothren in the legislative offices while he served as Press Secretary to the House GOP Caucus, while Casada addressed the alleged doctoring of an email.

“I have not or would never fail to report any felony conduct. The District Attorney is in the midst of concluding his investigation into emails sent by my office and I remain confident that my staff and I will be cleared of any wrongdoing very soon.”

Then addressing Carter’s charges of overspending, Casada offered a lengthier explanation. “I have not spent $7 million more than Speaker Harwell on operating expenses. The Governor included $4 million for the House and $2 million for the Senate in his proposed budget because there has not been an increase in the legislative budget in quite some time. After conferring with the Senate, the amount was reduced to roughly $3 million for the House and $1.5 for the Senate. My plan is to use this money for across the board salary increases for staff. If any member would like for me to do otherwise I am happy to discuss it further.”

Casada pointed out that Carter’s claim is damaging to others besides himself. “To suggest so is a slap in the face to any legal staffer or committee member who actually attempted to work on the advisory opinion that I requested.”

As per the rules, Casada added, “The Ethics Committee is split 5-5 in a bipartisan manner and I asked for the request in earnest.”

Again, Casada expressed openness to discussing the issue, perhaps for the purpose of putting an end to the very public discourse, “If anyone would like to call me, including Representative Carter, I’m happy to discuss it further.”

No matter the outcome of the House Republican Caucus meeting and the anticipated secret ballot regarding continued support of Casada, it is not apparent that it would be a path to removing him as Speaker.

With this most recent and very public dispute between Carter and Casada, Monday’s GOP Caucus meeting may be reminiscent of the House Majority Leader contest between the two back in 2016. At the time, Casada was also embroiled in a scandal as the result of a video showing him in a compromising situation with a young woman at a restaurant. Casada went on to win that House Republican Caucus election by a vote of 42-29.

At the last update, the House Republican Caucus meeting scheduled for Monday, May 20 will still be closed to the public and media.